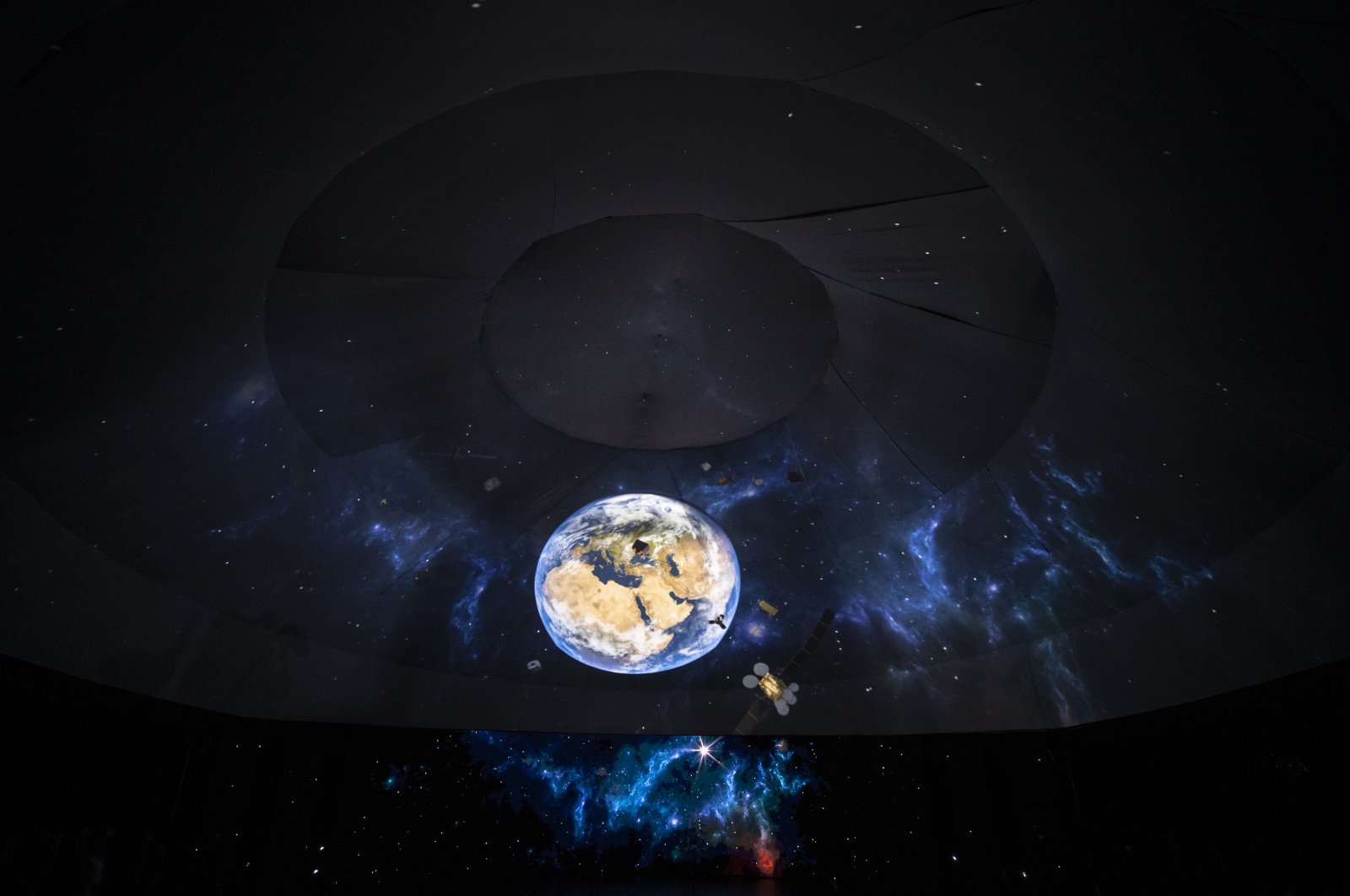 An illustration of the space is seen during the inauguration ceremony of Turkey’s National Space Program in the capital Ankara, Turkey, Feb. 9, 2021. (AA Photo)
by DAILY SABAH Feb 10, 2021 2:41 pm

The 10-year space program envisages making contact with the celestial body in 2023, sending citizens into space, working with other countries on building a spaceport and creating a global brand in satellite technology

In a major milestone, Turkey on Tuesday unveiled its ambitious 10-year space road map that includes missions to the moon, sending Turkish astronauts to a scientific mission in space and developing internationally viable satellite systems.

President Recep Tayyip Erdoğan announced the National Space Progam that includes 10 strategic goals, seen as part of his vision for placing Turkey in an expanded regional and global role, during a live televised event laced with special effects.

“I now present to you Turkey’s 10-year vision, strategy and aims and I say, ‘Look at the sky, you will see the moon,'” he said.

Erdoğan said Turkey plans to establish “a first contact with the moon” in 2023 when the country marks the centennial of the founding of the Republic of Turkey.

“Our primary and most important goal for our national space program is the contact of the republic, in its 100th year, with the moon,” Erdoğan noted. “God willing, we are going to the moon.”

Turkey aims to reach its strategic space goals in 10 years, Erdoğan said, adding that the country will improve work on satellite technologies and establish a spaceport with other ally countries.

Noting that the program was prepared and will be carried out by the Turkey Space Agency (TUA), the president said Turkey is opening the door to the space journey of its civilization that pioneered justice, morality and peace in the world for centuries.

Turkey established the TUA in 2018 with the aim of joining the handful of other countries with space programs.

The president did not elaborate further on the cooperation. Last month, Erdoğan spoke to Tesla and SpaceX boss Elon Musk on possible cooperation in space technologies with Turkish companies.

Last month, Turkey launched its new-generation communication satellite Türksat 5A into orbit from the U.S. in cooperation with SpaceX. The Türksat 5B satellite is planned to be launched in the second quarter of 2021.

Noting that the use of space for civilian purposes would require international cooperation, Varank said Turkey is at the signing stage of agreements with Pakistan and Azerbaijan on its space agency.

The TUA is also in talks with the U.S., Russia, Japan, India and China to set up international cooperation for the use of space for civilian purposes, the minister told Anadolu Agency’s (AA) Editors’ Desk.

TUA Chairperson Serdar Hüseyin Yıldırım on Tuesday said Turkey is in the process of a draft agreement with Russia over space cooperation, TASS news agency reported.

“For sure, Russia is a very important space nation, we are well aware of that. We indeed want to cooperate,” Yıldırım said. According to the TUA head, Ankara is hoping to come to an agreement with Russia on the precise areas of cooperation “in a few months.”

Turkey's mission to the moon will be completed in two stages, Erdoğan said Tuesday.

In the first stage, a rough landing will be made on the moon with a national and authentic hybrid rocket that will be launched into orbit at the end of 2023 through international cooperation.

“When completing this task, we will be one of the countries that have managed to reach the moon, and we will gather necessary information for the second stage of the mission,” the president said.

In the second stage in 2028, the initial launching, which carried Turkey's probe to orbit, will be made with the country's own rockets, Erdoğan noted, adding: “As we make a soft landing on the moon, we will be one of the few countries that could conduct scientific activities on it.”

“I hope that this road map, which will carry Turkey to the top league in the global space race, will come to life successfully," Erdoğan said.

He also declared Turkey’s aim to send Turkish citizens into space with international cooperation, to work with other countries on building a spaceport and to create a “global brand” in satellite technology.

After the unveiling, the public and leading figures began discussing what to call Turkish space travelers as an alternative to an astronaut or its less common version, the cosmonaut.

Turkey previously launched reconnaissance and communication satellites, set up a satellite systems integration and test center, and manufactured a domestic HD satellite called IMECE which is expected to be launched in 2022.

The program’s second goal is to create a trademark on the new-generation satellite development. Erdoğan said the country would gather satellite production activities under a single authority coordinated by the TUA.

“We plan to gain a higher share of the world satellite market by enhancing our competitiveness thanks to this move,” he explained.

With this regional positioning system, to be created with an innovative method by using satellites along with ground systems, Turkey will end its external dependency, he stressed.

“This will pave the way to develop our own precise navigation applications in defense, agriculture, urbanization and autonomous vehicles,” the president said.

Spaceport to be established

Turkey is planning to establish a spaceport while ensuring access to space, he stressed.

“We should make our national and domestic rockets carry heavy payloads into Earth’s orbit,” he underlined.

Noting that Turkey’s geographical location is not convenient for establishing the spaceport, Erdoğan said Turkey would cooperate with allied countries in the most suitable areas.

Another goal of the program is to increase its competitiveness in space by investing in space meteorology, he said.

Turkey will boost its efficiency in astronomical observations and the follow-up of space objects from the Earth, he noted.

“Thus, we will contribute to the recording and tracking of objects in Earth’s orbit,” he said.

A Space Technology Development Region will be established to welcome domestic and foreign investors, the president also said.

Noting that the country will develop effective and competent human resources in the field of space, Erdoğan said the “final goal is to send a Turkish citizen to space with a scientific mission.”

Touching on the government’s efforts in the field of space, Erdoğan said TL 2.1 billion (nearly $300 million) had been provided for 56 projects on satellite, space, launching systems and space equipment in the last 18 years.

As the country develops new technologies such as observation satellites, Turkey will ensure full security of the information obtained from satellites through Turkish engineers’ software, Erdoğan added.

“We have developed and produced several critical subsystems such as a high-resolution space camera, a new-generation flight computer and software, an electric thruster engine, a steerable antenna, a reaction wheel, a star camera and a sun sensor,” he noted.

Under the program, Turkey will further develop the economy of its space industry, Erdoğan stressed.

“We will carry the success we have achieved in the defense industry to the space arena and ensure the formation of a strong and productive ecosystem,” he noted.

The space program will raise Turkey above its current capabilities and make it an important player in the space economy, Varank said.

“Turkey will enhance its value-added economy thanks to the program,” he said. “The program will pave the way for Turkey (...) to become an important power in the field of the space economy.”

Scientific and Technological Research Council of Turkey (TÜBITAK) Chairperson Hasan Mandal said the goals of the program were exciting, stressing the country was entering a new path in space studies.

“Each of them (the goals) is exciting, but also requires responsibility. As a stakeholder in this process, we will exist at every stage with our strength, with our human resources, with our infrastructure, with our support, and will begin to meet the goals set by our president starting as of 2023,” Mandal noted.

“We will all work together to create excitement especially for our young people who are enthusiastic about space," he said.

The head of defense contractor Roketsan, Murat Ikinci, said the company was tasked with providing Turkey’s independent access to space.

Roketsan opened its Space Technologies and Advanced Technologies Research Center in August in the capital Ankara.

“With the technologies that we will develop in these facilities, I hope that we will provide our country with independent access to space,” Ikinci noted.

As the most important part of this mission, he said they will provide technologies that “will launch our own national satellite, a 100-kilogram (220-pounds) microsatellite, into space with our own rockets and place it in orbit.”

“We successfully launched our probe rockets into space, the first step of this. I think that our success here will make a great contribution to our country," Ikinci said.

Aselsan General Manager Haluk Görgün said the vision set out in the program is exciting, saying they are happy to be part of the studies.

“As Aselsan, we work on satellite systems with useful payloads, receivers, transmitters and ground systems. We have a contribution to task loads in all existing programs,” said Görgün.

In this sense, he said, the company will continue to work on its effectiveness, its contribution to the program and the development of youth and human resources, together with stakeholder institutions and universities.

In addition to the recently launched new-generation communication satellite, Türksat 5A, Turkey has several other satellites currently in space.

Three of the satellites currently in space are operating for communication, namely Türksat 3A, Türksat 4A and Türksat 4B, while the other three, Göktürk-1, Göktürk-2 and Rasat, are for observation.

Turkey’s first communication satellite Türksat 1A was launched into orbit on Jan. 24, 1994, but it fell into the ocean 12 minutes after liftoff due to a malfunction in the launcher, and the mission failed.

Maintaining investments in satellite technology, Turkey took its place in space in August 1994 with satellite Türksat 1B.

Although the original design life of the satellite was three years, it successfully completed its ninth year in orbit as of Aug. 17, 2020.

The Rasat satellite, in circular orbit synchronized with the sun and at an altitude of 700 kilometers (435 miles), operates with 7.5 meters (24.6 feet) of monochrome and 15 meters of multiband spatial resolution push-broom camera.

Turkey’s other Earth observation satellite Göktürk-1, aimed at meeting the high-resolution image needs of the Turkish Armed Forces (TSK) for target intelligence, was launched in 2016.

Settled at a low-altitude Earth orbit, the satellite can perform various remote sensing tasks such as monitoring the environment and housing, agricultural yield detection, municipal practices, border control and cadastral activities for public institutions and organizations.

The lifespan of the 0.5-meter resolution satellite, designed to explore in any location in the world without geographical restrictions, is predicted to be seven years.

The satellite has high-speed data communication that can download an image of a nearly 640-kilometer lane in a single pass.