Turkish inflation falls unexpectedly to nearly 16.6% in May 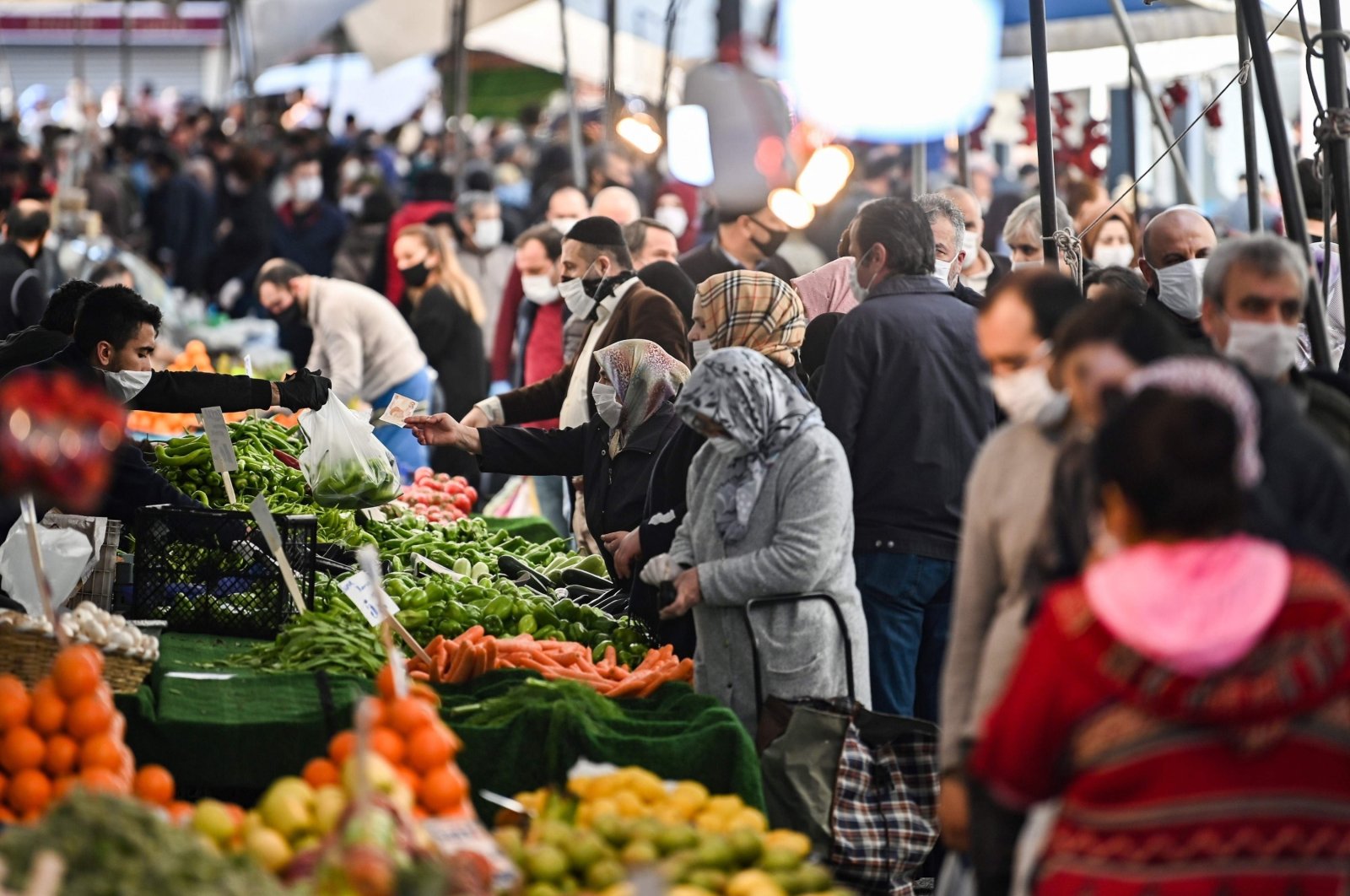 People wearing masks do their grocery shopping at a market in Bayrampaşa, Istanbul, Turkey, April 17, 2020. (AFP Photo)
by DAILY SABAH WITH AGENCIES Jun 03, 2021 10:08 am
RECOMMENDED

In contrast to forecasts, Turkey’s inflation rate slowed in May from a two-year high, data showed Thursday, bucking market expectations for another rise thanks largely to limited price increases during a full lockdown in the first half of the month.

Consumer prices increased an annual 16.59% in May, the Turkish Statistical Institute (TurkStat) said, compared to market estimates that predicted acceleration to around 17.25%.

The Turkish lira weakened further in May, raising expectations of higher inflation due to imports priced in hard currencies.

The median estimate in a Reuters poll for annual inflation was 17.25%. A Bloomberg survey of 25 economists saw it coming in at 17.3%, while an Anadolu Agency (AA) poll predicted it to increase to 17.17%.

Turkey was under lockdown in the first half of May aimed at slowing the spread of new COVID-19 cases.

Economists said a ban on the sale of some items during the lockdown curbed price rises but that hikes could be implemented in June.

“The limited price rises in groups other than food due to reduced demand because of the lockdown had a large impact on the drop in annual inflation,” said Haluk Bürümcekçi, of Bürümcekçi Consulting.

The rise in clothing prices was far below last year’s level, he told Reuters.

The producer price index rose 3.92% month-on-month in May, the data showed, for an annual rise of 38.33%. That is expected to contribute to headline inflation in the coming months, as the input costs are reflected on consumer prices.

The Central Bank of the Republic of Turkey (CBRT) had said inflation would peak in April, and Governor Şahap Kavcıoğlu told investors Wednesday that inflation would enter a significant downward trend at the end of the third quarter or the beginning of the fourth.

He said that the key policy rate would continue to be set at a level above realized and expected inflation to maintain a strong disinflation effect.

This will be in place until strong indicators show a permanent decline in inflation are formed and the medium-term target of 5% in 2023 is reached, the governor noted.

Kavcıoğlu also sought to ease concerns of premature easing during Wednesday’s meeting as he denounced market expectations of an impending rate cut, stressing that premature easing views are groundless and unjust.

“Expectations of an early policy easing, which are not based on just reasoning, need to disappear,” he said.

His remarks came after President Recep Tayyip Erdoğan late Tuesday said that Turkey needs to lower interest rates, adding that he had spoken to the governor earlier in the day about the issue.

“It is an imperative that we lower interest rates. For that, we will reach July and August thereabouts, so that rates can begin to fall,” Erdoğan said.

He stressed that lowering interest rates would lift the burden on investments. Erdoğan has frequently called for lower borrowing costs.