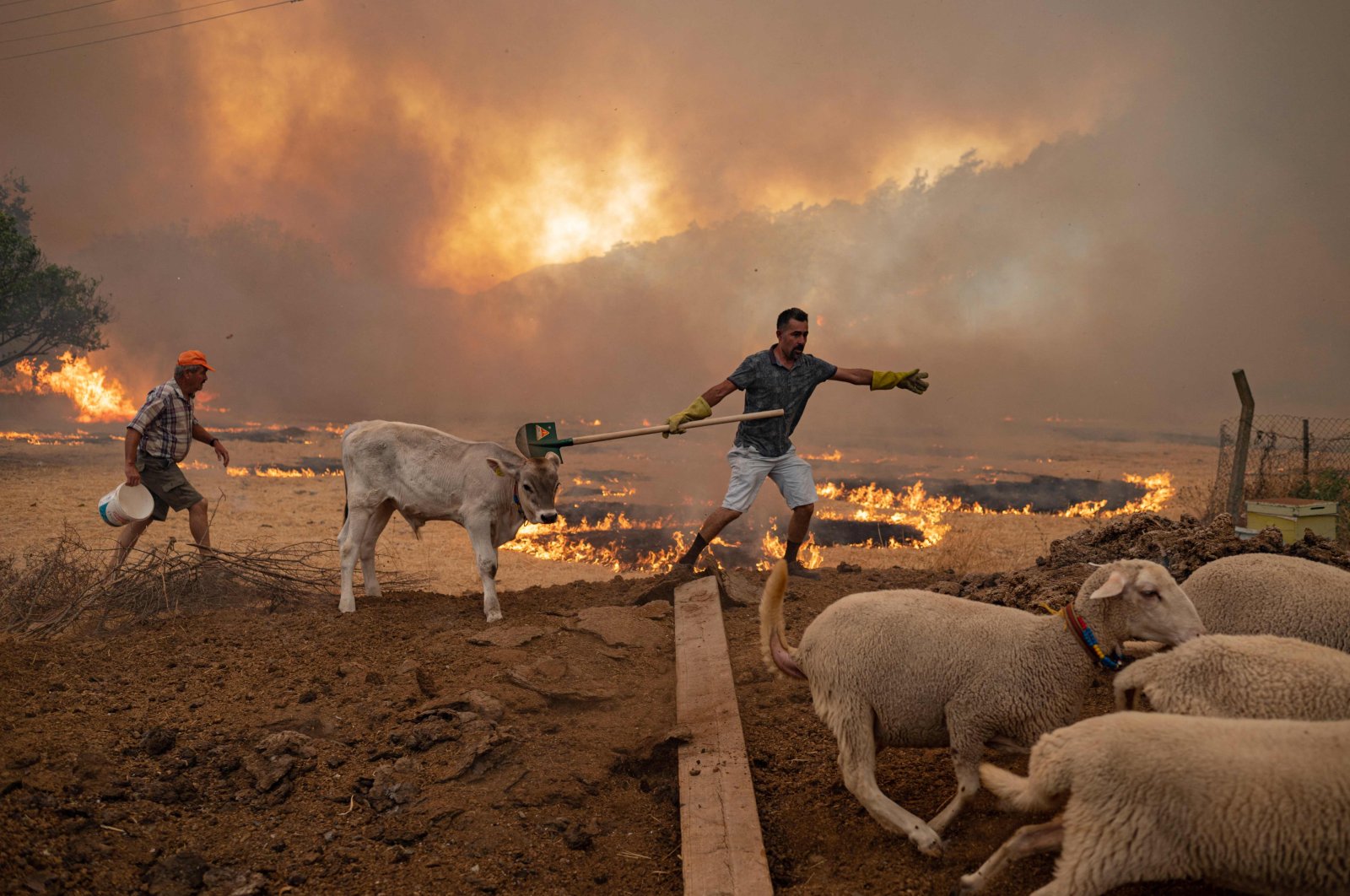 The wildfires ravaging Turkey’s southern and western coastal regions, which firefighters have been struggling to contain due to strong winds, have already caused great damage to agricultural fields and farms. Now the production of olives, honey and many fruits and vegetables is at risk.

As of Tuesday, only 13 wildfires remain out of dozens as firefighters in six provinces have worked since last Wednesday to extinguish the blazes. The worst fires in terms of size and speed are in the Manavgat and Gündoğmuş districts of southern Antalya and in the Marmaris and Milas districts of southwestern Muğla.

Manavgat's banana and vegetable greenhouses as well as its olive and citrus fields were damaged by the blazes. In Muğla, pine trees – from which the bees collect honeydew – were particularly damaged.

According to the preliminary assessment of the Agriculture and Forestry Ministry, the wildfires in the last five days left the honey production significantly at risk in Muğla since some 80% of the region, which is home to 45% of Turkey’s total bee breeding, was burned to ashes.

Mutlu Ayhan, chairperson of the Marmaris Chamber of Commerce, said that an area of 8,000-8,500 hectares had burned down.

"We were producing approximately 3,000 tons of 165,000 honeycombs every year. Marmaris is the capital of pine honey in the world ... 80% of the production areas remained in ashes," he said.

Turkey Beekeepers Center Union head Ziya Şahin said that there are 8.2 million bees throughout Turkey, and 3 million to 3.5 million of them come to Muğla every year to make pine honey. Stating that the bees feed on the secretions from the pine trees until March-April, Şahin said, "These trees were destroyed due to the fire. Only the pine trees in Muğla's center and Fethiye district remained. There is a huge risk in pine honey production now. There will be a decrease in production."

Firefighters on the ground and water bomber planes and helicopters above have been combatting the fires, while drone footage revealed a gray landscape nearby where fires had ravaged buildings and blackened tree trunks.

More than 300 cattle, around 3,000 sheep and goats, nearly 4,000 poultry animals and some 400 beehives were destroyed in the fire. Meanwhile, Ali Çandar, chairperson of Antalya Commodity Exchange, said feed and straw aid has come from exchanges in various parts of the country to be delivered to the farmers.

Agricultural Insurance Pool (TARSIM) also took action for the farmers and breeders whose businesses were damaged by the wildfires. A total of 431 damage reports were made to TARSIM. A total of 319 of these notifications were made for animal life insurance, 70 for greenhouse insurance and 44 for crop insurance branches. The total insured asset cost for the notified files is TL 85 million ($10.2 million).

The payment periods of social security premium debts of workplaces and insurance holders in areas affected by forest fires will be extended and Turkey's Small and Medium Industry Development Organization (KOSGEB) announced that they gave zero-interest support loans with a limit of TL 100,000 and TL 250,000 for the regions affected by the disaster.

Currently, some 16 planes – including those that came to Turkey’s aid – and 51 helicopters are tackling the blazes across the swathe of southwest Turkey. The EU said it helped mobilize firefighting planes from Croatia and Spain to help Turkey. Planes from Ukraine, Russia, Azerbaijan and Iran have also been fighting the blazes. Spain said it was sending two water-dumping aircraft and one transport plane as well as 27 soldiers to help.

Eight people have been killed in the wildfires, but there were no reports of further casualties on Monday. Residents and tourists have fled vacation resorts in flotillas of small boats or convoys of cars and trucks.