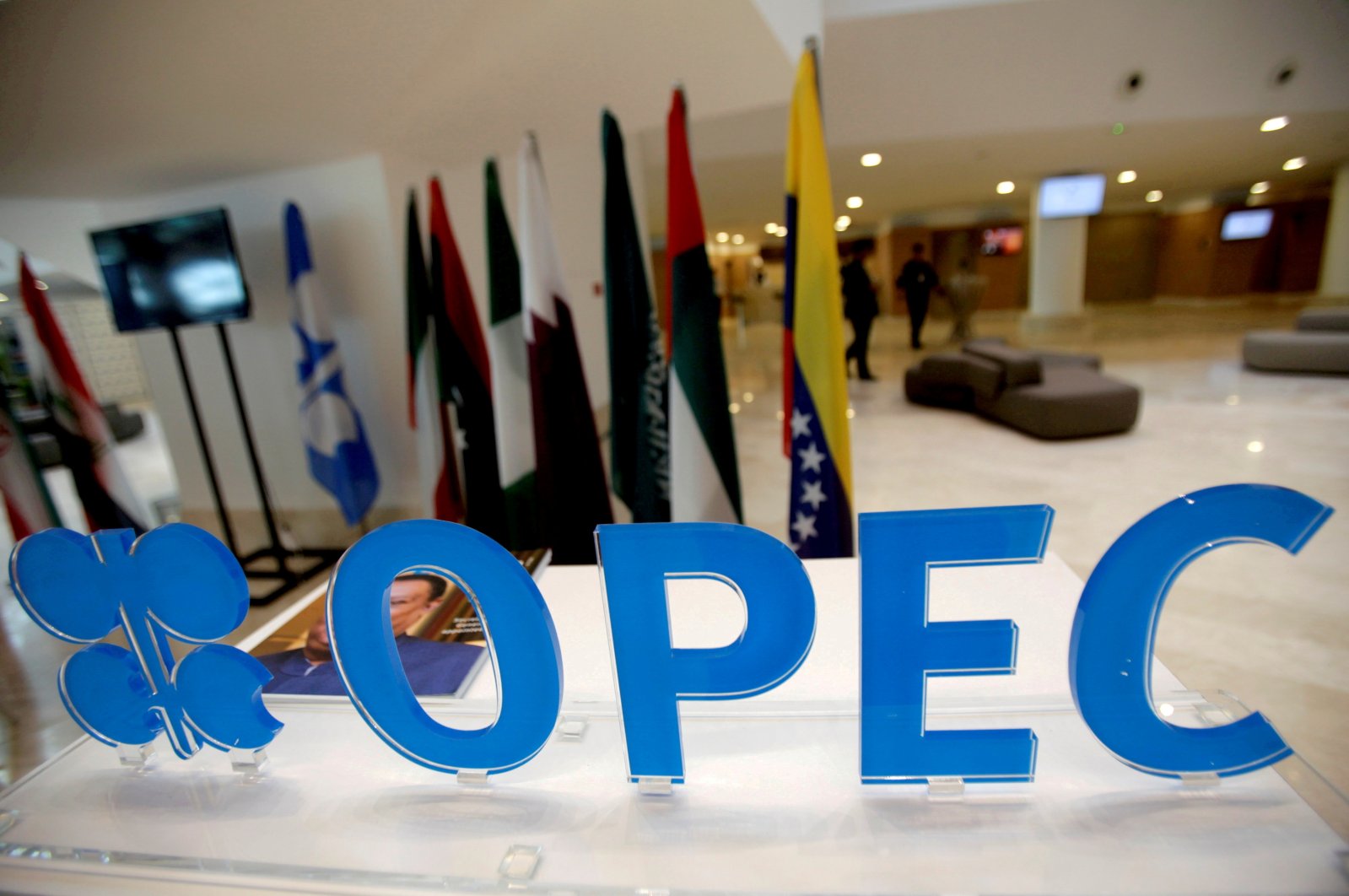 The logo pictured ahead of an informal meeting between members of the Organization of the Petroleum Exporting Countries (OPEC) in Algiers, Algeria, Sept. 28, 2016. (Reuters Photo)
by Agencies Jul 18, 2021 5:16 pm
RECOMMENDED

Ministers of oil-producing nations Sunday agreed to boost oil supply from August to cool prices that have climbed to 2-1/2 year highs amid the global economy's recovery from the coronavirus pandemic.

Organization of the Petroleum Exporting Countries (OPEC) and its allies, known as OPEC+, crucially agreed on new production allocations from May 2022 after Saudi Arabia and others acceded to a request from the United Arab Emirates (UAE) that had threatened the plan, roiling global energy prices.

The disagreement, sparked by a demand by the UAE to increase its own production, temporarily upended an earlier meeting of the cartel.

“What binds us together is way beyond what you imagine,” Saudi Energy Minister Prince Abdulaziz bin Salman said. “We differ here and there, but we bond.”

Prince Abdulaziz declined to elaborate on how they came to that consensus, saying it would see the cartel “lose our advantage of being mysterious and clever.”

But he clearly bristled at earlier reports on the dispute between Saudi Arabia, long the heavyweight of the Vienna-based cartel, and the UAE.

Prince Abdulaziz deferred at the beginning of a news conference to al-Mazrouei in a sign of respect.

“The UAE is committed to this group and will always work with it and within this group to do our best to achieve the market balance and help everyone,” al-Mazrouei said. He praised the deal as a “full agreement” among all the parties.

OPEC+ last year cut production by a record 10 million barrels per day (bpd) amid a pandemic-induced slump in demand and collapsing prices.

It has gradually reinstated some supply to leave it with a reduction of about 5.8 million bpd.

From August until December 2021 the group will increase supply by a further 2 million bpd or 0.4 million bpd a month, OPEC said in a statement.

The cartel acknowledged that oil prices have continued to improve.

“Economic recovery continued in most parts of the world with the help of accelerating vaccination programs,” it said.

The group had agreed to extend their overall pact until the end of 2022 from an earlier planned date of April 2022, to leave more room for maneuvering in case the global recovery stalls due to new virus variants.

Whilst both Riyadh and the UAE had been supportive of an immediate output boost, the UAE had objected to the Saudi idea to extend the pact to December 2022 without getting a higher production quota.

To overcome the disagreement, OPEC+ agreed on new output quotas for several members from May 2022, including the UAE, Saudi Arabia, Russia, Kuwait and Iraq.

The overall adjustment will add 1.63 million bpd to supply from May next year, according to Reuters calculations.

The UAE will see its baseline production, from which cuts are being calculated, increase to 3.5 million bpd from May 2022 from today's 3.168 million.

Outside of OPEC, tensions still remain between the neighboring nations. The UAE largely has withdrawn from the Saudi-led war in Yemen, while also diplomatically recognizing Israel. Saudi Arabia also has opened its doors to Qatar again after a yearslong boycott, though relations remain icy between Abu Dhabi and Doha. Saudi Arabia also has aggressively sought international business headquarters – something that could affect the UAE’s business hub Dubai.

Oil prices collapsed amid the pandemic as demand for jet fuel and gasoline dropped following lockdowns across the globe, briefly seeing oil futures trade in the negatives.

Demand since has rebounded as vaccines, while still distributed unequally across the globe, reach arms in major world economies.

Once muscular enough to grind the U.S. to a halt with its 1970s oil embargo, OPEC needed non-members like Russia to push through a production cut in 2016 after prices crashed below $30 a barrel amid rising American production.

That agreement in 2016 gave birth to the so-called OPEC+, which joined the cartel in cutting production to help stimulate prices.

Prince Abdulaziz, in praising Sunday’s agreement, offered a cheery assessment of the future despite the recent turmoil.

“OPEC+ is here to stay,” the prince proclaimed.