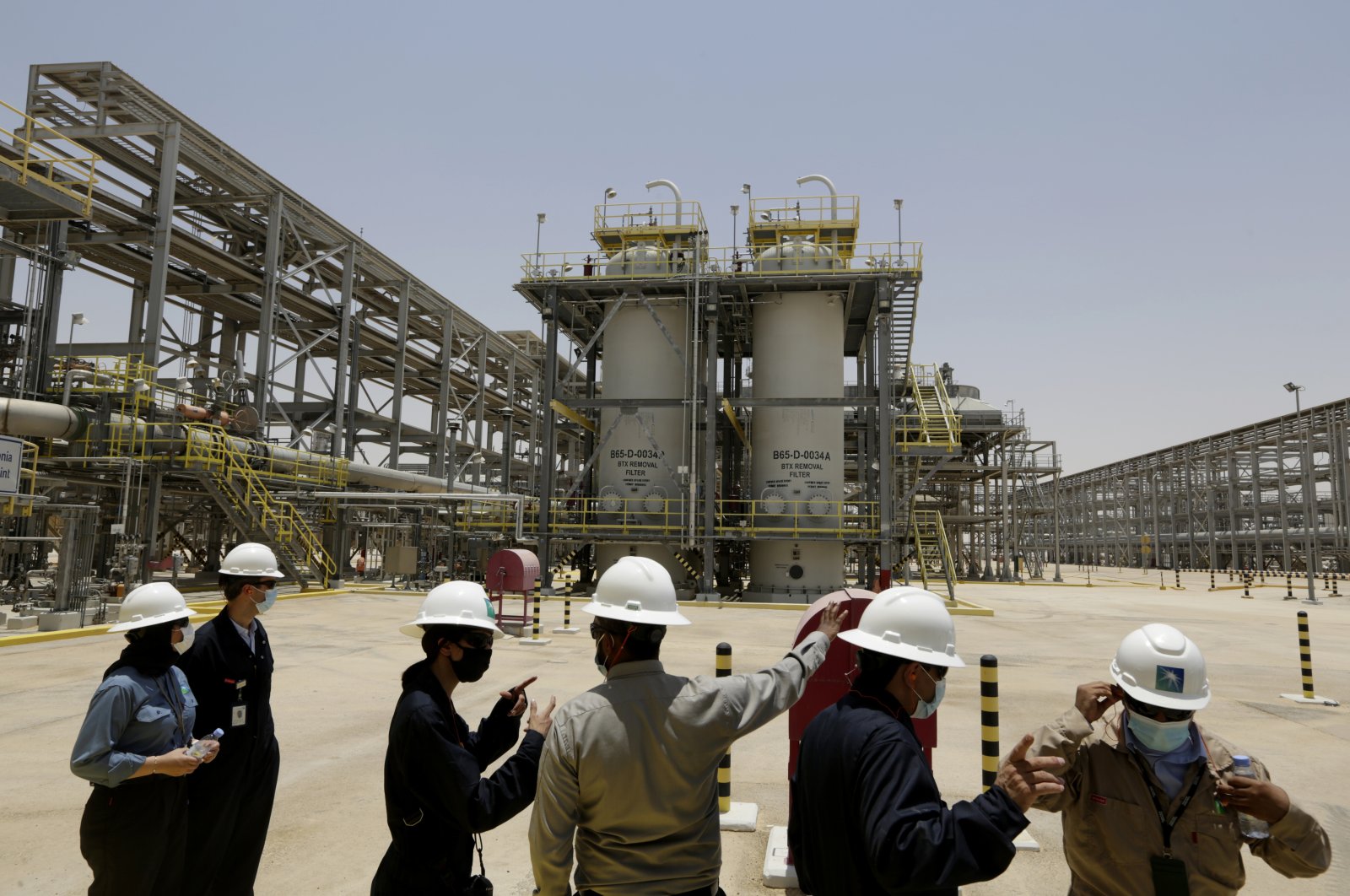 Saudi Aramco engineers and journalists look at the Hawiyah Natural Gas Liquids Recovery Plant, which is designed to process 4.0 billion standard cubic feet per day of sweet gas, a natural gas that does not contain significant amounts of hydrogen sulfide, in Hawiyah, in the Eastern Province of Saudi Arabia, June 28, 2021. (AP Photo)
by French Press Agency - AFP Aug 08, 2021 12:34 pm
RECOMMENDED

Saudi Aramco’s second-quarter profits for 2021 had nearly quadrupled compared to the same period last year. The company also reported on Sunday a net income of around $47 billion for the first half of the year, on the back of higher oil prices.

The company's success comes after its debts climbed last year when Saudi Arabia was hammered by the double whammy of low prices and sharp cuts in production triggered by the coronavirus pandemic.

Aramco said its net profit rose to $25.5 billion in the second quarter of the year, compared to $6.6 billion in the same quarter of 2020, owing to a stronger oil market and higher refining and chemicals margins, all buttressed by the easing of COVID-19 restrictions.

"Our second-quarter results reflect a strong rebound in worldwide energy demand, and we are heading into the second half of 2021 more resilient and more flexible, as the global recovery gains momentum," Aramco chief executive Amin Nasser said in a statement.

The announcement comes approximately two months after the company said it raised $6 billion from its first dollar-denominated Islamic bond sale, posting earlier this year a 30% jump in first-quarter profits.

Aramco – the kingdom's cash cow – said in May that its net profit rose to $21.7 billion in the first three months of the year.

The energy giant posted a 44.4% slump in 2020 net profit, piling pressure on government finances as Riyadh pursued its multi-billion-dollar projects to diversify the economy.

An OPEC+ meeting decided to raise output by 400,000 barrels per day (bpd) each month from August to help fuel a global economic recovery as the pandemic eases.

Long seen as the kingdom's economic "crown jewel," Aramco and its assets were once tightly government-controlled and considered off-limits to outside investment.

But with the rise of Crown Prince Mohammed bin Salman (MBS), Saudi Arabia's de facto ruler, who is accelerating efforts to implement his "Vision 2030" reform program, the kingdom has shown readiness to cede some control.

Aramco previously sold a sliver of its shares on the Saudi stock market in December 2019, generating $29.4 billion for 1.7% of its shares.

In April, the company said it had struck a $12.4-billion deal to sell a minority stake in a newly formed oil pipeline business to a consortium led by U.S.-based EIG Global Energy Partners.

Aramco also declared a dividend of $18.8 billion for the second quarter.

Some analysts have raised concerns at past drone and missile attacks – claimed by Yemen's Houthi rebels – on Aramco's facilities in the kingdom.

There are also increased fears over cyberattacks, with Aramco confirming last month that company data had been leaked from one of it contractors. However, the company said it had "no impact" on operations.

They have since recovered with a bang, currently trading above $70 per barrel.