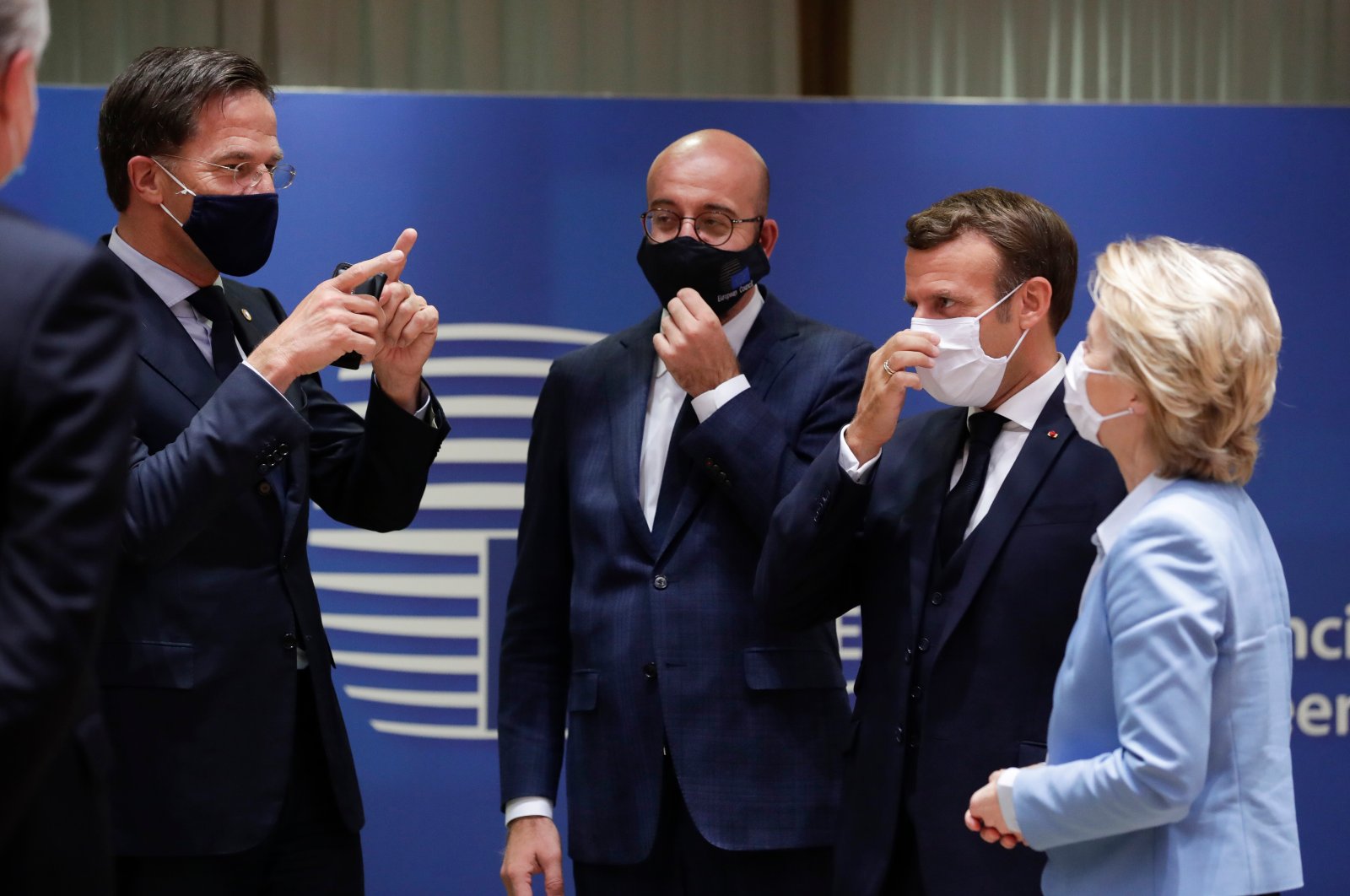 After four days and nights of wrangling, exhausted European Union leaders finally clinched a deal on an unprecedented 1.8 trillion-euro ($2.1 trillion) budget and coronavirus recovery fund early Tuesday, after one of their longest summits ever.

The 27 leaders grudgingly committed to a costly, massive aid package for those hit hardest by COVID-19, which has already killed 135,000 people within the bloc alone.

With masks and hygienic gel everywhere at the summit, the leaders were constantly reminded of the potent medical and economic threat the virus poses.

"Extraordinary events, and this is the pandemic that has reached us all, also require extraordinary new methods,” German Chancellor Angela Merkel said.

To confront the biggest recession in its history, the EU will establish a 750 billion-euro coronavirus fund, partly based on common borrowing, to be sent as loans and grants to the hardest-hit countries. That is in addition to the agreement on the seven-year, 1 trillion-euro EU budget that leaders had been haggling over for months, even before the pandemic.

"The consequences will be historic," French President Emmanuel Macron said. "We have created a possibility of taking up loans together, of setting up a recovery fund in the spirit of solidarity," a sense of sharing debt that would have been unthinkable not so long ago.

Merkel added: "We have laid the financial foundations for the EU for the next seven years and came up with a response to this arguably biggest crisis of the European Union."

Despite Macron and Merkel negotiating as the closest of partners, the traditionally powerful Franco-German alliance struggled for days to get the quarreling nations in line. But, even walking out of a negotiating session in protest together over the weekend, the two leaders bided their time and played their cards right in the end.

"When Germany and France stand together, they can’t do everything. But if they don’t stand together, nothing is possible," said Macron, challenging anyone in the world who criticized the days of infighting to think of a comparable joint endeavor.

"There are 27 of us around the table and we managed to come up with a joint budget. What other political space in the world is capable of that? None other," Macron said.

At first, Merkel and Macron wanted the grants to total 500 billion euros, but the so-called "frugals” – five wealthy northern nations led by the Netherlands – wanted a cut in such spending and strict economic reform conditions imposed. The figure was brought down to 390 billion euros, while the five nations also got guarantees that grants had to be linked to economic reforms.

"There is no such thing as perfection, but we have managed to make progress,” Macron said.

The summit at the urn-shaped Europa Center laid bare how the nations' narrow self-interests trumped the obvious common good for all to stand together and face a common adversary.

The bickering spun the summit out, making it the EU's second-ever longest, just 20 minutes short of a record set in 2000 at five-day summit in Nice, France, when safeguarding national interests in institutional reforms long was a stumbling block. "We would have broken the record at 6:05, but we ended at 5.45," Dutch Prime Minister Mark Rutte said.

Still, considering every EU leader had the right of veto on the whole package, the joint commitment to invest and spend such funds could be seen as a success.

Adriaan Schout, an EU expert and senior research fellow at the Clingendael think tank in the Netherlands, said that the unusually acrimonious and drawn-out talks ultimately produced a typical Brussels deal.

“The EU hasn’t changed. This is always what it’s about – finding compromises – and the EU always finds compromises,” he said. “And the compromise has been hard fought. There are checks and balances in it. We don’t know how they will work.”

The days and nights of brutal summiteering will surely have left many wounds between member states, but as history has proven, the EU has an uncanny gift to quickly produce scar tissue and move on.

"We all can take a hit," said Rutte. "After all, there are presidents among us."

Despite bruising confrontations with Merkel, Macron and his Italian counterpart, Giuseppe Conte, Rutte maintained that "we have very good, warm relations."

Conte also did not have time to dwell on grudges. With 35,000 Italians dead from COVID-19 and facing EU estimates his economy will plunge 11.2% this year, he had to think ahead, of things big and small – from getting cash to businesses still trying to get a foothold after the lockdown to getting school desks.

In order to open schools in September, his country needs up to 3 million new desks to replace old-fashioned double and triple desks so students can keep a proper distance.

‘’We will have a great responsibility. With 209 billion euros, we have the possibility to relaunch Italy with strength, to change the face of the country. Now we must hurry. We must use this money for investments, for structural reforms,’’ Conte said.

Even if Tuesday’s agreement was a giant leap forward, the European Parliament, which has called the moves of the member states too timid considering the challenge, still has to approve the deal.

Rutte and others also wanted a link to be made between the handout of EU funds and the rule of law – a connection aimed at Poland and Hungary, countries with right-wing populist governments that many in the EU think are sliding away from democratic rule.

In its conclusion, the European Council underlined the “importance of the respect of the rule of law” and said it will create a system of conditionality aimed at preventing member states from getting subsidies from the budget and recovery fund if they do not abide by its principles.

But Tuesday was a moment to revel in the achievement itself. What was planned as a two-day summit scheduled to end Saturday was forced into two extra days by deep ideological differences among the 27 leaders.

The compromise deal they finally hammered out was one that Hungarian Prime Minister Viktor Orban claimed as a victory.

“We not just managed to get a good package of money, but we defended the pride of our nations and made clear that it is not acceptable that anybody, especially those who inherited ... the rule of law criticize us, the freedom fighters that did a lot against the communist regime in favor of rule of law,” he said.

The coronavirus has sent the EU into a tailspin, killing around 135,000 of its citizens and plunging its economy into an estimated contraction of 8.3% this year.