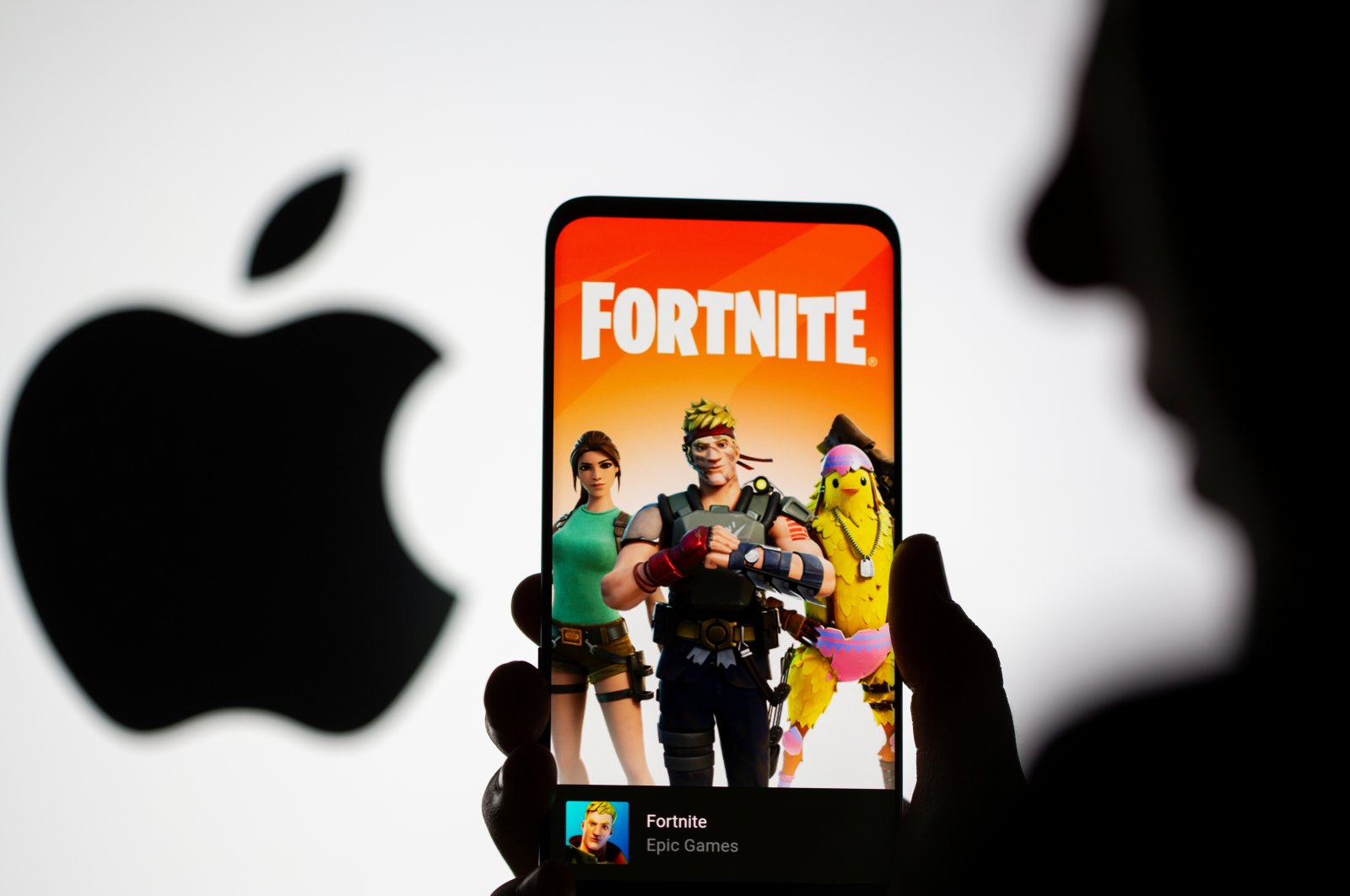 Fortnite game graphic is displayed on a smartphone in front of Apple logo in this illustration taken May 2, 2021. (Reuters Photo)
by Associated Press May 03, 2021 2:29 pm
RECOMMENDED

Telecommunications giant Apple on Monday faces one of its most serious legal threats in recent years. The court case, brought by Epic Games, maker of the popular video game Fortnite, challenges Apple and threatens to upend its iron control over its app store, which brings in billions of dollars each year while feeding more than 1.6 billion iPhones, iPads, and other devices.

Epic wants to topple the so-called "walled garden” of the app store, which Apple started building 13 years ago as part of a strategy masterminded by co-founder Steve Jobs.

Epic charges that Apple has transformed a once-tiny digital storefront into an illegal monopoly that squeezes mobile apps for a significant slice of their earnings. Apple takes a commission of 15% to 30% on purchases made within apps, including everything from digital items in games to subscriptions. Apple denies Epic’s claims.

Apple's highly successful formula has helped turn the iPhone maker into one of the world’s most profitable companies, one with a market value that now tops $2.2 trillion.

Privately held Epic is puny by comparison, with an estimated market value of $30 billion. Its aspirations to get bigger hinge in part on its plan to offer an alternative app store on the iPhone. The North Carolina company also wants to break free of Apple’s commissions. Epic says it forked over hundreds of millions of dollars to Apple before it expelled Fortnite from its app store last August after Epic added a payment system that bypassed Apple.

Epic then sued Apple, prompting a courtroom drama that could shed new light on Apple's management of its app store. Both Apple CEO Tim Cook and Epic CEO Tim Sweeney will testify in an Oakland, California federal courtroom that will be set up to allow for social distancing and will require masks at all times.

Neither side wanted a jury trial, leaving the decision to U.S. District Judge Yvonne Gonzalez Rogers, who already seems to know her ruling will probably be appealed, given the stakes in the case.

Much of the evidence will revolve around arcane but crucial arguments about market definitions.

Epic contends the iPhone has become so ingrained in society that the device and its ecosystem have turned into a monopoly Apple can exploit to unfairly enrich itself and thwart competition.

Apple claims it faces significant competition from various alternatives to video games on iPhones. For instance, it points out that about 2 billion other smartphones don't run iPhone software or work with its app store – primarily those relying on Google’s Android system. Epic has filed a separate case against Google, accusing it of illegally gouging apps through its own app store for Android devices.

Apple will also depict Epic as a desperate company hungry for sources of revenue beyond the aging Fortnite. It claims Epic merely wants to freeload off an iPhone ecosystem in which Apple has invested more than $100 billion over the past 15 years.

Estimates of Apple's app store revenue range from $15 billion to $18 billion annually. Apple disputes those estimates, although it hasn’t publicly disclosed its own figures. Instead, it has emphasized that it doesn’t collect a cent from 85% of the apps in its store.

The commissions it pockets, Apple says, are a reasonable way for the company to recoup its investment while financing an app review process it calls essential to preserving the security of apps and their users. About 40% of the roughly 100,000 apps submitted for review each week are rejected for some sort of problem, according to Kyle Andeer, Apple’s chief compliance officer.

Epic will try to prove that Apple uses the security issue to disguise its true motivation – maintaining a monopoly that wrings more profits from app makers who can’t afford to be not available on the iPhone.

But the smaller company may face an uphill battle. Last fall, the judge expressed some skepticism in court before denying Epic’s request to reinstate Fortnite on Apple's app store pending the outcome of the trial. At that time, Gonzalez Rogers asserted that Epic’s claims were "at the frontier edges of antitrust law.”

The trial is expected to last most of May, with a decision to come in the ensuing weeks.