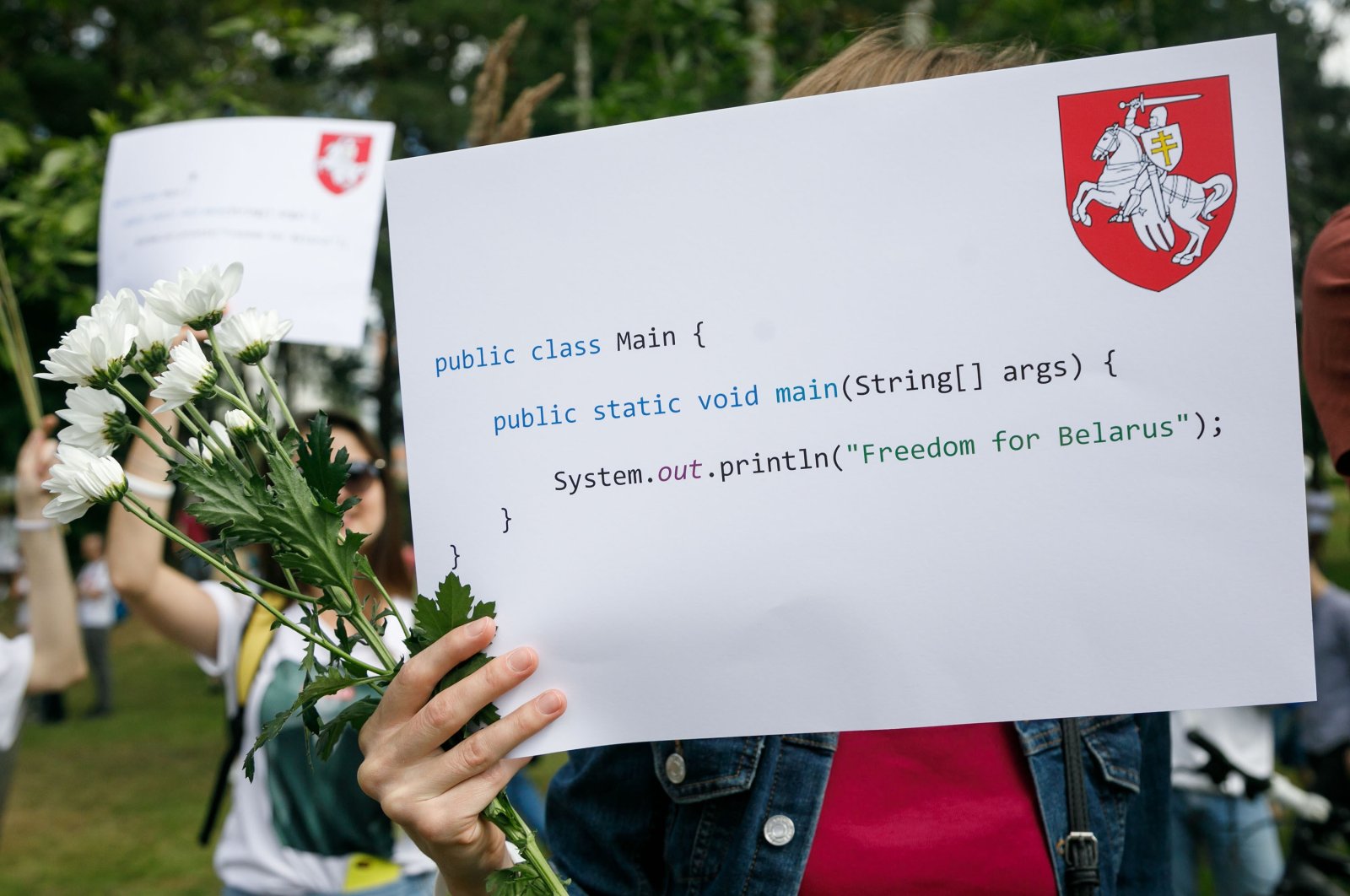 IT specialists rally near Hi-Tech park in support of detained and injured participants of the protests that erupted in the aftermath of the presidential election, Minsk, Belarus, Aug. 14, 2020. (Shutterstock Photo)
by French Press Agency - AFP Jun 27, 2021 1:58 pm
RECOMMENDED

The IT industry in Belarus is struggling with a rapidly dwindling number of workers as thousands of specialists decided to leave their country in the wake of protests against strongman Alexander Lukashenko's 26-year rule.

Like thousands of others in Belarus, IT specialist Aliaksandr Charnavoki took to the streets of Minsk last year for unprecedented protests against Lukashenko's highly disputed election victory.

Arrested, struck by police and held in detention for four days, Charnavoki eventually fled to neighboring Ukraine – joining an exodus of fellow tech workers that has left the future of a booming IT sector in doubt.

It was not the "violence and lawlessness" that made him leave, Charnavoki, 39, told Agence France-Presse (AFP) in an interview on messenger Telegram.

It was the sense that nothing would ever change.

"The fight against the regime has become meaningless," he said.

If ex-Soviet Belarus is known for producing anything, it is more likely to be tractors, fertilizer and oil products than software and tech services.

But in recent years its capital Minsk has become a regional high-tech hub, especially after 2017 when Lukashenko signed a decree allowing tech companies not to pay most taxes, including income tax.

The country's Hi-Tech Park (HTP) scheme has seen more than 1,000 tech companies register to operate in Belarus, with over 70,000 workers.

Gaming giant Wargaming – maker of "World of Tanks" and its multiple spin-offs – was founded in Minsk and maintains its central development studio in the city.

Calling app Viber was another success story from the HTP, with its early development done in offices in Belarus, until the company was bought by Japanese tech giant Rakuten in 2014 for $900 million.

Much of the work is less glamourous – like outsourced custom software design for corporate clients – but very profitable.

The HTP says the Belarusian tech sector's exports of products and services hit a record $2.7 billion in 2020, up 25% from the year before, and accounting for 4% of the country's gross domestic product.

But now the industry is facing deep uncertainty after thousands of its workers – many of them liberal-minded opposition supporters like Charnavoki – decided to leave.

Last year's wave of demonstrations over a disputed August 9 election was met with an intense crackdown. Thousands were jailed as reports of torture and ill-treatment at the hands of police circulated widely.

Backed by ally Moscow, Lukashenko has weathered the protest storm despite fierce Western condemnation and several rounds of new sanctions.

The sanctions have not targeted the IT sector, but Sergei Lavrinenko, a Minsk-based IT expert, said he expected its growth to stall because of the exodus.

He estimated that up to 15,000 IT workers have already fled Belarus because of the crackdown.

Some companies have shuttered their operations entirely.

Founded in Minsk in 2011, PandaDoc, a sales process software provider, closed its office in the city and relocated dozens of staff to neighboring countries after coming under pressure from authorities.

Its founder Mikita Mikado is a prominent Lukashenko opponent and during the protest movement offered financial aid and re-training in the tech sector to police who turned against the government.

The company's offices were raided and four employees were arrested, with three still under house arrest and one behind bars.

Ivan, a 28-year-old IT specialist, told AFP by phone from Minsk that the atmosphere among young tech workers in the city turned sour after the crackdown.

"The places where IT geeks went to party emptied, cafes there are empty, some of them have gone bankrupt," said Ivan, who did not want his last name published, fearing repercussions. "The mood is no fun."

Some of Belarus's neighbors see an opportunity, with countries like Ukraine, Poland and the Baltic states looking to attract disaffected IT specialists.

Ukraine is offering simplified migration procedures and tax breaks for Belarusian IT specialists who want to work in the country.

Charnavoki, who left Minsk in October, quickly found a position as a software developer at a Ukrainian IT company.

He said that while he had the chance to get out of Belarus, others in IT – especially those with children – had found it more difficult to leave.

IT expert Lavrinenko said it may take time, but "if the situation does not change" it is unlikely the sector will continue to thrive.

"I think people will leave, slowly but steadily, and in a few years, the industry could even find itself in a recession."