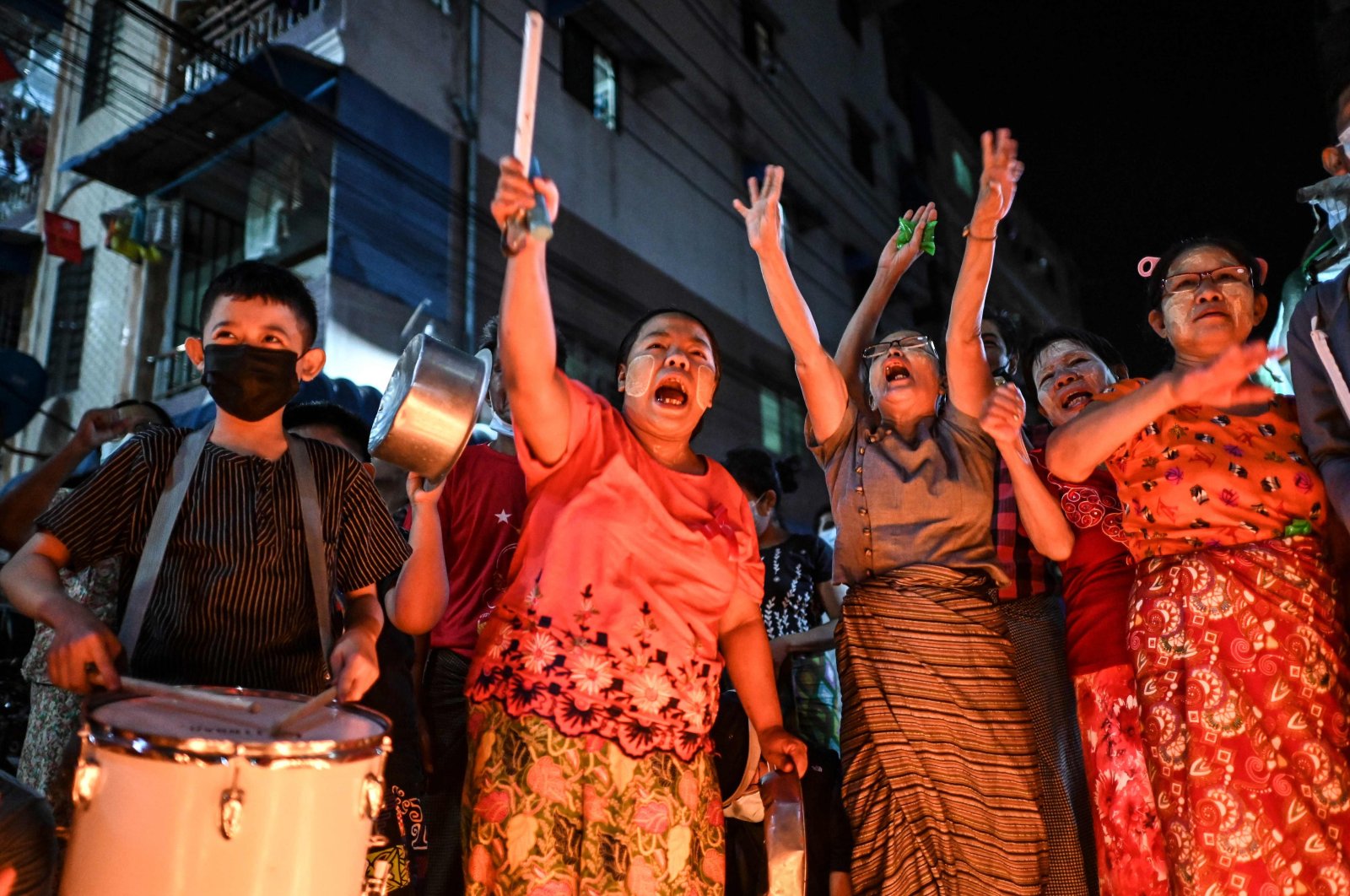 People take part in a noise campaign on the street after calls for protest against the military coup emerged on social media, in Yangon, Myanmar, Feb. 5, 2021. (AFP Photo)
by French Press Agency - AFP Feb 05, 2021 8:13 pm
RECOMMENDED

Twitter was blocked Friday night in Myanmar by the military that recently overthrew the civilian government, both NetBlocks – an internet monitoring group – and witnesses within the country have said.

Users in Myanmar confirmed the platform could not be accessed.

Later on, Norwegian telecom Telenor said in a statement that mobile operators and internet service providers in Myanmar received a government directive on Friday to block access to Twitter and Instagram in the country until "further notice."

Myanmar's military seized power on Feb. 1, in a coup against the democratically elected government of Aung San Suu Kyi, who was detained along with other leaders of her National League for Democracy (NLD) party in early morning raids.

According to a Ministry of Transport and Communications document seen by Agence France-Presse (AFP) but not verified, Twitter and Instagram were used to "spread incitement and false news ... causing misunderstanding among the public."

"For the sake of the public and stability of the country, Instagram and Twitter will be temporarily blocked until further notice from Feb. 5," it said.

Friday also saw around 200 teachers and students protest at a Myanmar university – the largest show of public dissent within the country so far.

"We have to resist this dictatorship," lecturer Win Win Maw told AFP.

"If all civil servants participate in this movement, it's not easy to operate this government system."

Hours before the rally, Win Htein, a key aide of Suu Kyi, was arrested at his daughter's house, said Kyi Toe, press officer for her National League for Democracy party.

Speaking to local media ahead of his arrest, Win Htein called on people in the country to "oppose (the coup) as much as they can."

While Suu Kyi has not been seen in public since she was detained on Monday, Kyi Toe said she's currently "under house arrest" in Naypyidaw, the country's capital, and was "in good health."

According to the Assistance Association for Political Prisoners (AAPP), a Yangon-based group that monitors political arrests in Myanmar, more than 130 officials and lawmakers have been detained.

With Facebook stifled on Wednesday, many people had moved to Twitter in recent days or started using VPN services to bypass the blockade.

After the Twitter restriction Friday, hashtags like #WeNeedDemocracy and #FreedomFromFear – based on a famous quote by Suu Kyi – started trending.

A so-called Civil Disobedience Movement has gathered pace online, calling on the public to voice opposition every night by banging pots and clanging cymbals to show their anger.

"I feel our hope is broken by the military after they seized power," said food vendor Thazin Oo, whose mobile phone case has a photo of Suu Kyi.

Police in Mandalay, Myanmar's second-largest city, detained more than 20 people for banging pots and pans. They were sentenced Friday to seven days in prison for violating a public disorder law.

Another four university students from Mandalay were charged Friday for protesting at a small rally the day before without permission and breaking coronavirus rules.

As they were escorted out of court in chains, they flashed a defiant three-finger salute to the waiting media.

Some 300 members of parliament (MP) also held a virtual meeting Friday to convene an unofficial "parliament committee" in defiance of military rule, according to the NLD.

The coup has drawn global condemnation.

On Thursday, U.S. President Biden reiterated his call for the generals to reverse course.

"The Burmese military should relinquish power they have seized, release the advocates and activists and officials they have detained, lift the restrictions in telecommunications and refrain from violence," he said.

The United Nations Security Council took a softer line, voicing "deep concern" – a step down from a draft Tuesday that had condemned the coup.

Diplomats said veto-wielding China and Russia, Myanmar's main supporters at the U.N., had asked for more time Tuesday to finesse the council's response.

There have been calls on multinational companies working with Myanmar's military-linked businesses to cut ties as a way to pressure the generals.

Japanese beer giant Kirin, long under scrutiny over its ties to Myanmar's army-owned breweries, said Friday it was terminating a joint venture with a military-owned conglomerate.