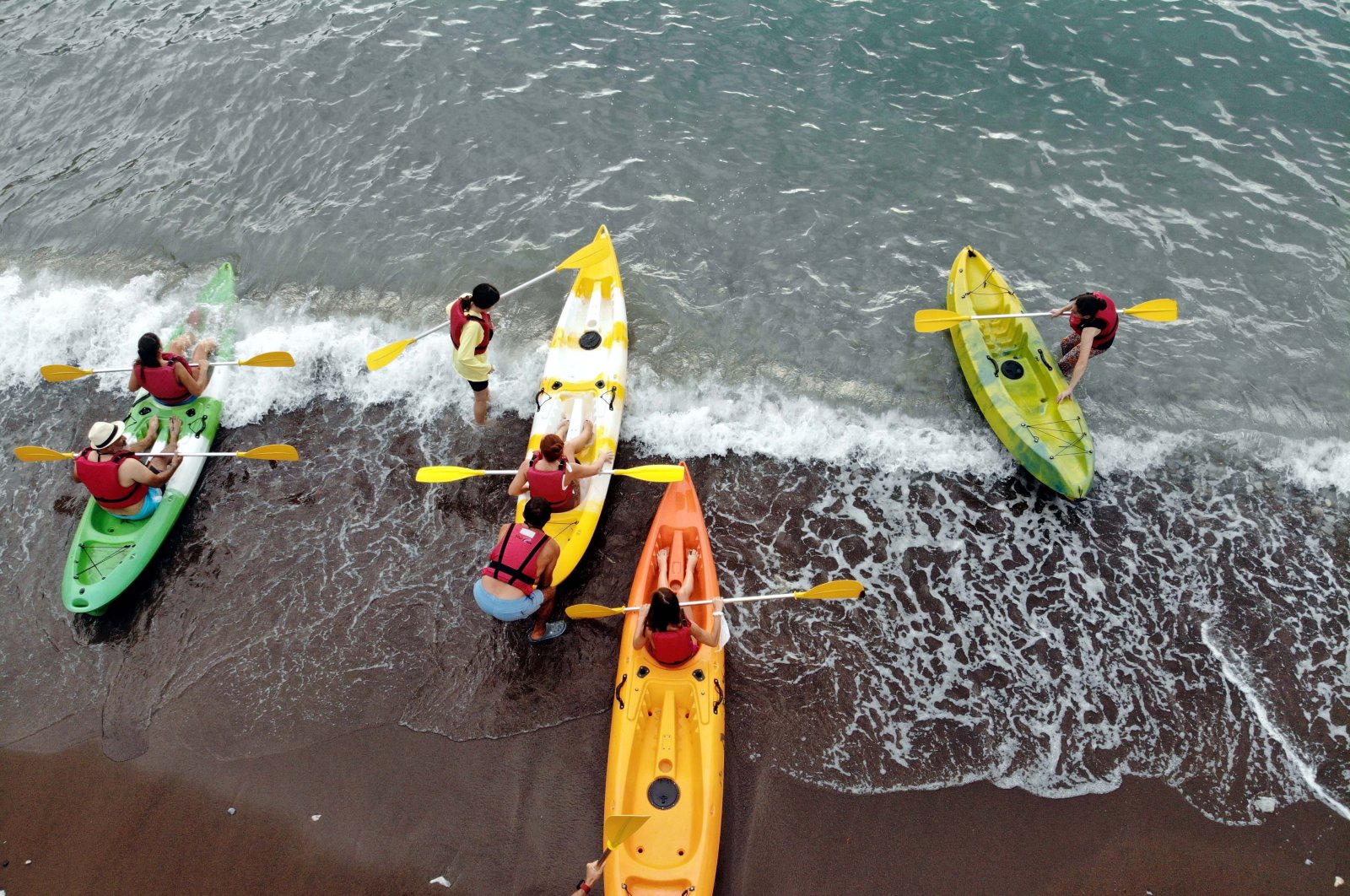 A group of Russian media personalities delighted with the beauty of the region recently arrived in the southwestern Turkish province of Muğla as part of a program to promote tourism.

The guests arrived in Muğla as part of events organized to promote the tourism potential of the province and attract even more Russian vacationers, who traditionally make up the majority of the foreign holidaymakers in the region.

The Aegean province, which is actually a popular destination among expats, with a significant population of U.K. and Dutch nationals living there year-round, is known for its world-famous sea, sand, sunny beaches, natural beauty and historical monuments.

The guests, who had their photos taken in front of Iztuzu Beach and the 2,400-year-old rock tombs, had the opportunity to relax by canoeing in the bays and swimming in the sea.

While visiting the pomegranate gardens in the Dalyan district, Russian influencers harvested the produce with women working in the field and shared photos and videos on social media about their experiences.

They aimed to contribute to the promotion of the region with the posts, which received many likes in a short time.

Blogger Tatyana Bedareva, who has many followers in Russia, said she came to discover the beauty of Muğla.

Stating that she had visited the Mediterranean city of Antalya, its Alanya and Kemer districts, but had yet to see Muğla, Bedareva said: "We saw that there is a great variety of activities in this region. For the first time in my life, I saw how pomegranates grow. Although it is not the first time that we came to Turkey, I was very happy to discover new places.

"I recommend it to my followers by showing the beauty of this place. As a result, the number of people coming here will definitely increase. I will come here again with my family and kids," she said.

"My children reproached me, asking ‘Why didn't you take us?' I will definitely come again. This place is beautiful. Dalyan's scenery, food, nature and hospitality impressed me a lot."

Aminna Biserov, one of the guests, said their aim is to discover and promote the natural beauty, culture and people of the region.

Saying that she participated in the tour with her husband, Biserov said: "I was amazed by the natural beauty of the region. I will share the most beautiful places of this region with all my followers. I will invite everyone here."

Kisenye Motkova, another guest, said the region is an ideal place for a holiday, adding: "Nature is magnificent here. There is everything you are looking for a holiday. After the program is over, I will come here with my boyfriend."

Speaking to Anadolu Agency (AA), YDA Dalaman Airport Board Member Hamdi Güvenç said they have been working for a long time to design an effective promotion for the Russian market.

Güvenç underlined that Muğla hosted tourists during the coronavirus pandemic, mainly from Ukraine and Russia, adding that this season, the U.K., Muğla's primary market, did not lift the travel ban on Turkey, depriving British tourists of their much-preferred holiday spot.

Noting that they have prepared a program to introduce the Dalaman region to wider audiences, especially in Russia and Ukraine, Güvenç said that part of the program was digital marketing, which they have been working on for four months.

"In cooperation with the management of a Russian airport, which sends the second-highest number of passengers to Turkey, we tried to select bloggers who are very active in Russia, have more than 1 million followers and appeal to various audiences," he added.

The project also received support from Turkey's Culture and Tourism Ministry and the Turkiye Tourism Promotion and Development Agency.

The group of influencers, which will stay for five days, will work on regional promotion, he added.