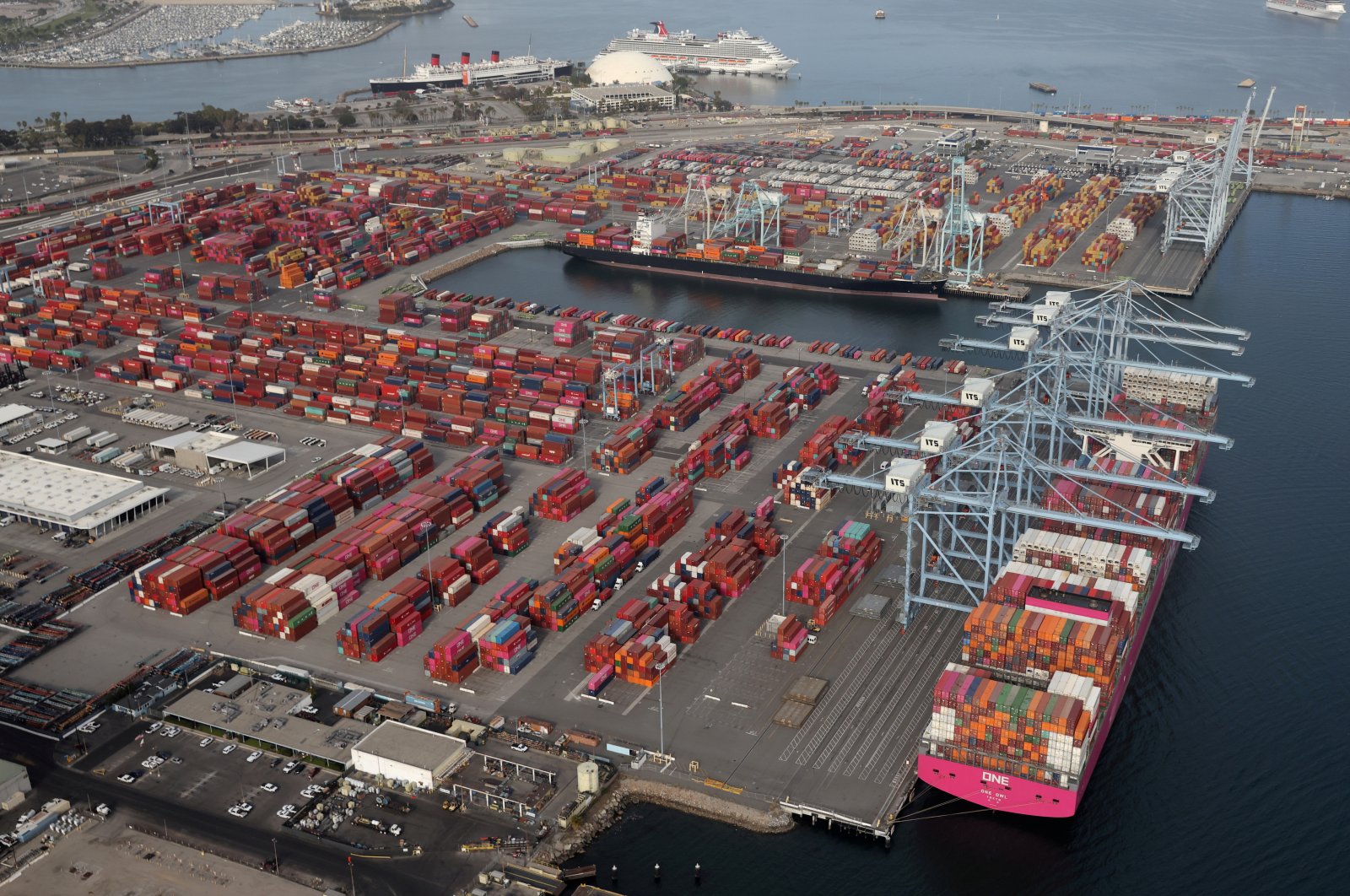 Shipping containers are unloaded from ships at a container terminal at the Port of Long Beach-Port of Los Angeles complex, Los Angeles, California, U.S., April 7, 2021. (Reuters Photo)
by DAILY SABAH May 26, 2021 2:52 pm
RECOMMENDED

With the rapid vaccination drive against the COVID-19 pandemic, recovery in world trade is expected to gain further momentum. Although this is something we had all been waiting for, it signals a new crisis in the logistics industry, particularly with regards to the availability of shipping containers.

Exporters have already been experiencing bottlenecks, especially after the maritime container shipping steamed ahead through the pandemic halt with a strong demand for Chinese exports and now a new supply shortage crisis is knocking at the door, industry representatives in Turkey warned.

Logistics companies are looking for solutions to overcome the new supply shortage with little damage while accelerating investments to increase existing capacity.

The supply shortage began in the third quarter of last year when the first wave of the pandemic ended with a demand boom in the U.S.

Freight costs more than doubled also on trans-Atlantic and trans-Pacific routes. China's move came at a time Turkey’s maritime trade was already experiencing a container shortage despite it being the most cost-effective way to transport goods. A slowdown in imports combined with an increase in the country's exports has created the problem of not being able to find empty containers before, with firms worried about orders sitting in warehouses in limbo.

Turkey's exports hit an all-time high for April with a 109% increase to $18.8 billion, managing to outperform pre-pandemic levels.

Turkish Port Operators Association (TÜRKLIM) consultant Soner Esmer told Turkish economics daily Dünya Wednesday that the equipment problem, which is not expected to be solved until 2022, is facing a new threat today: “The normalization process after one and a half years of restrictions, especially in developing countries such as Turkey, caused a new explosion in demand,” he said.

“This will cause the already ongoing container equipment supply problem to deepen even more.”

Barış Dilek, general manager of Mediterranean Shipping Company (MSC) Turkey, one of the largest container operators in the world, said due to the increase in customer demands, a decrease in container freight does not seem likely despite the costs.

“We, like MSC, brought empty containers directly from the U.S. ports with five ships in the first quarter. The cost of this is enormous. The balancing of freights can be done with the elimination of uncertainties. But the costs, which have maintained their increasing trend recently, show us that it will be difficult to go back to the old times,” Dilek said.

Turkish exporters have been voicing concerns on the issue and already called for the establishment of a local fleet of shipping containers.

Meanwhile, Durmuş Döven, chairperson of the board of Reysaş, one of the leading logistics groups in Turkey, told Dünya daily that they expect historical dynamism in global trade in the next two years and that the real big crisis regarding the containers was at the door.

However, to solve this, the company is preparing to establish a factory in the country to meet the container demand in Turkey and nearby countries.

Reminding that they are one of the biggest companies of Turkey in storage services and railway transportation, Döven said the demand for logistics has increased with the pandemic. “Currently, our warehouses are completely full. We even have to use the entrance of the warehouses. We do not have a meter of free space. We want to make new investments, but the problems in raw materials make it difficult.”

In its planned factory, Reysaş aims to produce containers that are used not only for logistics but also for special purposes, where demand has also increased with the pandemic. Initially, it will start with the production of 10,000 units and will take that number up to 50,000 units within five years.

The world's largest container shipping companies, such as the MSC and Evergreen, on the other hand, continue with large ship orders, preparing themselves for the upcoming period. MSC will expand the fleet with 30 and Evergreen with 20 new vessels.

According to Drewry data, which closely monitors the container industry, the total new container production is estimated to have increased by 52% this year compared to last year. Estimates suggest that this record rise will increase the total container capacity by at least 6 to 8%.