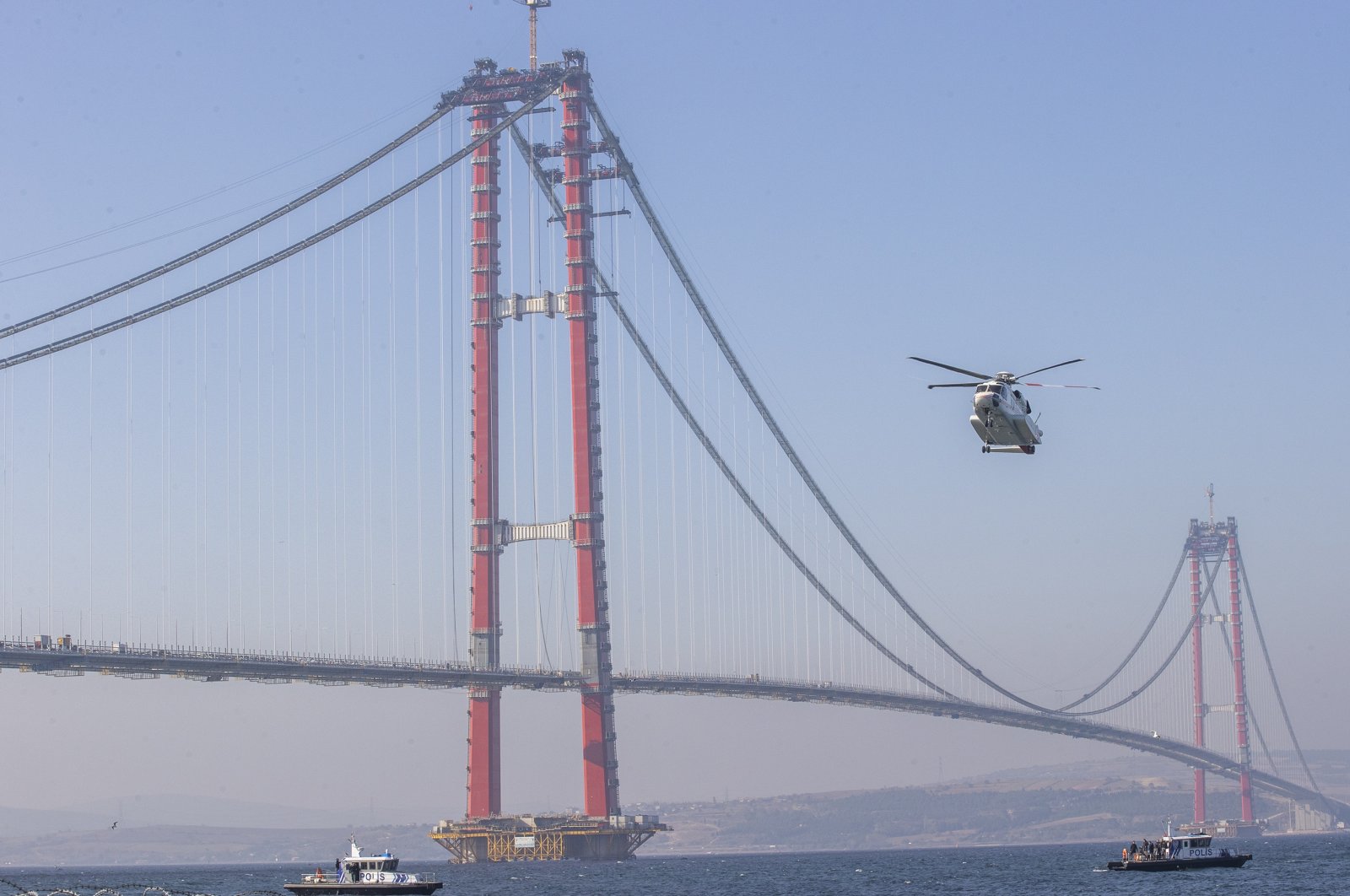 The final bridge deck slab of the 1915 Çanakkale Bridge was assembled Saturday, marking another crucial step in the completion of the landmark project crossing the Dardanelles.

President Recep Tayyip Erdoğan, Vice President Fuat Oktay and Transportation and Infrastructure Minister Adil Karaismailoğlu attended the assembly ceremony on the bridge connecting the towns of Lapseki and Gelibolu located on opposite sites of the key waterway in the northwestern province of Çanakkale.

During the ceremony, Erdoğan stated that the bridge will be opened for service by March 18, 2022, at the latest, which coincides with the 107th anniversary of the Çanakkale Naval Victory. Construction began in March 2018 with a budget of 2.3 billion euros ($2.6 billion).

The president noted that the bridge will cut travel time between Asia and Europe to a mere six minutes and will remove obstacles occurring during crossings. Normally, traveling between the European and Anatolian side of Çanakkale takes roughly 30 minutes via ferry, which is sometimes canceled during stormy weather, in addition to long hours of waiting in line during holiday seasons.

The 1915 Çanakkale Bridge will become the world’s longest midspan suspension bridge with a 2,023-meter (6,637-feet) span between its towers, which are painted red and white to reflect the colors of the Turkish flag.

The giant structure will be connected to the Malkara-Çanakkale Highway and will be the most important part of the 101-kilometer (62.75-mile) route. When the entire Kınalı-Tekirdağ-Çanakkale-Savaştepe Highway Project is linked to the Gebze-İzmir Highway, a highway chain will be formed around the Marmara Sea. Home to nearly one-third of Turkey's population, the eponymous region includes major industrial and commercial hubs.

With the completion of the projects, a reduction in ferry traffic is expected, especially during the summer months and public holidays, by creating alternative routes for transportation from the provinces of Istanbul and Thrace to the Marmara and Aegean regions.

In addition to reducing the travel time to about only four minutes, the project will ensure the integration of the ports in the Marmara and Aegean regions into all transportation systems.

The megaproject, undertaken by a consortium of South Korean and Turkish companies, will be the country’s fourth bridge and fifth crossing to connect Asia and Europe after the 15 July Martyrs Bridge, Fatih Sultan Mehmet Bridge, Yavuz Sultan Selim Bridge, Marmaray Rail Tunnel and the Eurasia Tunnel.

Shaped to symbolize artillery shells as a tribute to the legendary World War I Battle of Gallipoli, the spires will tower 318 meters (1,043 feet) high, The 2,023-meter span symbolizes the 100th anniversary of the Republic of Turkey’s foundation. The total length of the bridge will reach 4,608 meters (15,118 feet).