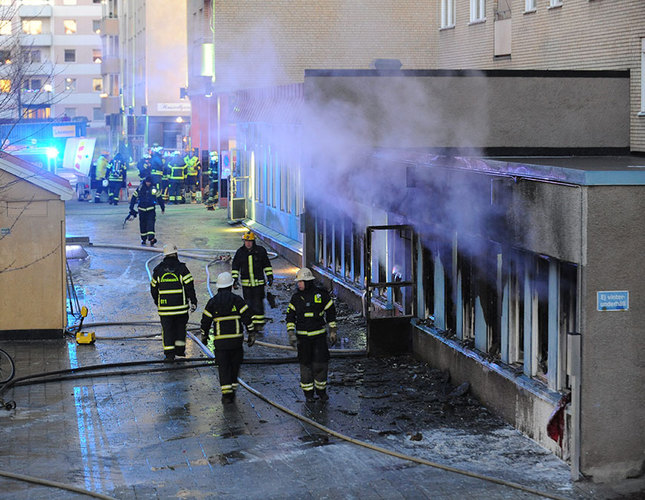 by Daily Sabah Dec 26, 2014 12:00 am
As reports of Islamophobic, xenophobic and racist attacks against Muslims and Muslim community centers have been flowing out of Europe in the last couple of weeks, the most recent arson attack has taken place in Eskilstuna, Sweden on December 25, injuring five out of twenty people that were at the mosque at the time.

Another attack took place in Vienna, Austria, in which the organs of a pig were hung on the door of Kocatepe Mosque belonging to the Turkish-Islamic Union in Austria. The attack was reported to the police by the mosque's community. An official from the Union stated "this attack was not only against Muslims, but an attack against the whole humanity."

"We will keep our calm stance as Muslims" the official said.

Five pig heads were earlier dropped into the construction of Eyüp Sultan Religious Vocational High School (İmam Hatip Lisesi) in Vienna during Eid, while swastikas were drawn on the walls of Eyüp Sultan Mosque in the state of Tyrol.

Although reports and official statements try to depict the attacks as individual acts mainly committed by people that have criminal and medical records, the rise in the number of the attacks and the accounts of the victims tell a different story. Attacks also seem to be shifting from buildings to the very presence of Muslims in Europe. The recent anti-Muslim demonstration in Dresden, Germany turned out to be the largest one in terms of attendance, with demonstrators openly dismissing the presence of Muslims in Europe and in Germany in particular.

Here are some the most recent attacks that were covered by Daily Sabah:

December 21: A half-built mosque located in the Dormagen, Germany was vandalized, covering the mosque with swastikas and racist graffiti associated with Nazism.

December 15: A Turkish mosque located in Eschede, Netherlands was attacked with fireworks, causing damage to the windows.

October 17: A severed pig's head was placed outside the Greek-Arab Education and Culture.