An Epic battle against a bad Apple: Revelations galore 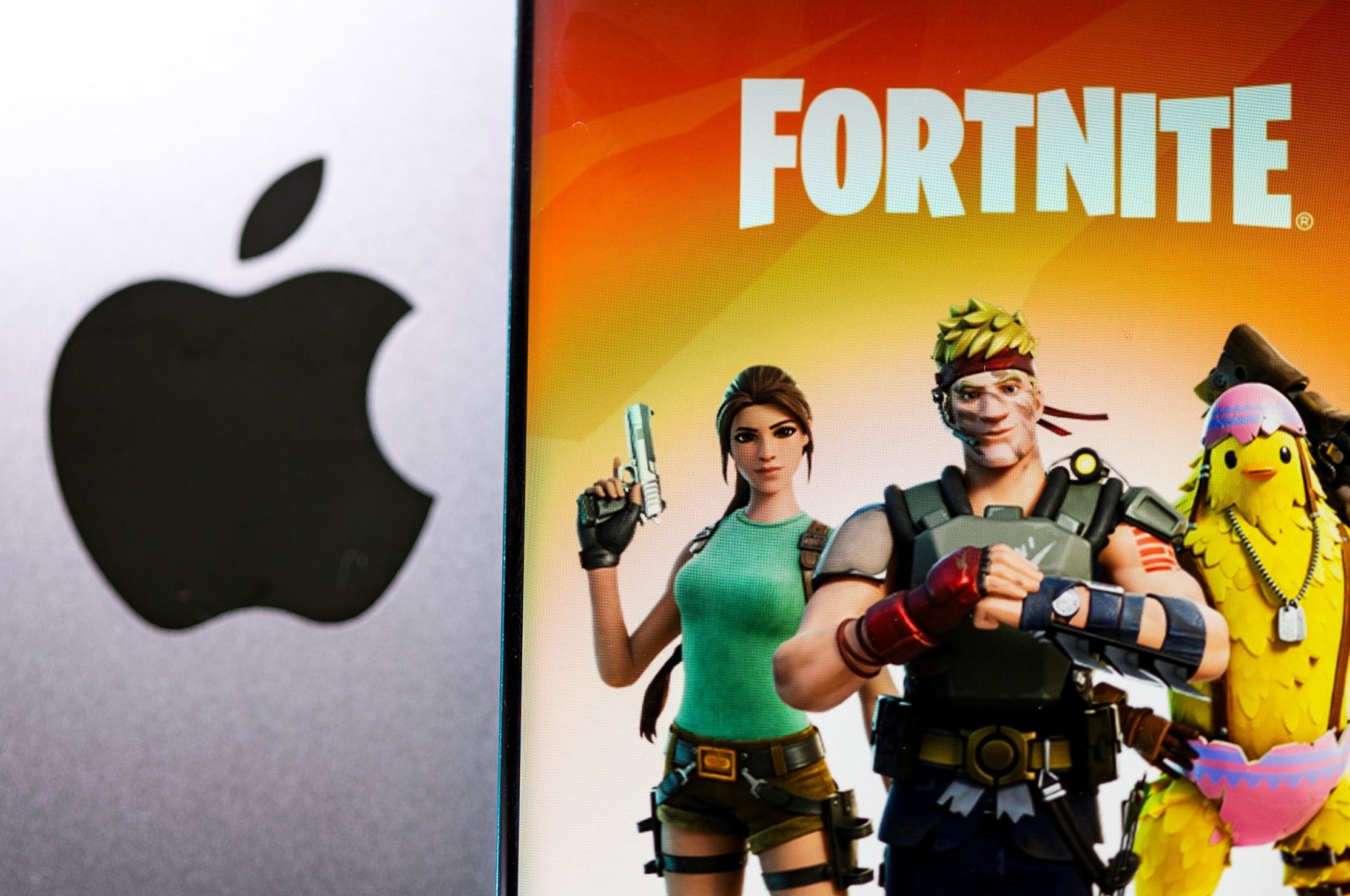 A fight ignited by Apple removing Fortnite from the App Store is raging. But this time, the war is very revealing, shedding light on a behind-the-scenes rivalry that is shaking the tech world from within

It is approaching a year since Epic Games, the maker of the hugely popular Fortnite and Unreal Engine, openly declared war on Apple due to payment issues.

The “App Store” monopoly, as Epic put it, was declared the reason for the fight, as the company introduced direct in-app payments in Fortnite to circumvent purchase via Apple systems.

The “Nineteen Eighty-Fortnite” ad published by Epic made the headlines. In the ad, Apple was portrayed as “pure evil” as it made a clear reference to the iPhone maker’s famous “1984” commercial, which aired in January 1984 in the United States.

In the ad, Apple targeted computer giant IBM, or the “Big Blue,” saying the company envisioned a future reminiscent of George Orwell’s dystopian classic “1984.” Epic was hitting the Cupertino-based iPhone maker with its own weapon.

Apart from the fact that it was in clear violation of App Store rules, it was an attempt by Epic to be portrayed as a hero, as one of Fortnite's characters was seen breaking a TV with a hammer, with the “Evil Apple” character vanishing from the screen afterward. Epic tried to draw a line between legality and morality by reminding everyone that slavery was once legal and freeing slaves was illegal, just as hiding Jews from the Nazis was a crime but reporting them was legal and encouraged. Epic blasted what it called Apple's "totalitarian" approach to running its app ecosystem.

Epic’s attempt was a highly successful public relations stunt. In the short period before Apple banned Fortnite and gamers could actually shop through Epic Games' own payment system, they were paying $2 less, $7.99 instead of $9.99. Epic was basically telling its customers, “Look, if Apple wasn't in the way, you'd be paying much less.” But Apple’s exorbitant cuts from publishers’ revenues have always drawn ire. Some 30% of all revenue goes to the California giant, which has been a tremendous contribution to its near-permanent growth in the last 10 years.

Many proposals have been made to solve the matter with some saying that Apple should be allowed only 10% and others allowing 15%. Despite the changing percentages, there's a consensus: 30% is not fair. Should Apple continue its harsh stance regarding the cut, many publishers, especially small and up-and-coming ones, are bound to have a breakdown one way or another. It has also been branded greedy, considering the revenues of the global app topped $50 billion in just the first half of 2020.

As the pie is so big, Epic wants more slices. That’s why this fight began anyway. Even though millions of mobile players using iPhones and iPads were deprived of a battle royale on the cross-platform shooter, the fight revealed a lot that would otherwise go unnoticed.

Since the trial kicked off recently in California's Oakland, the companies’ legal war has intensified.

In the lawsuit, Epic is alleging that Apple has “abused” the power it holds over the software developers who want to reach its 1 billion iPhone users, as the Cupertino-based giant is charging commissions of up to 30% on in-app purchases and conducting App Store reviews that Epic claims “hold back companies Apple views as competitors.”

The trial represents a standoff between the two tech giants, shedding light on many never-before-known facts.

One of the most revealing things about the trial has been this: Fortnite has made Epic over $9B in the game’s first two years.

Nine billion dollars... Generated by a free-to-play game. Apart from the fact that this is utterly incomprehensible even by today’s standards, it is clear that the battle royale would be making much much more if it were available on Apple devices.

The trial has also revealed that the CEO of Epic Games, Tim Sweeney, openly declared war against his namesake Apple counterpart.

It seems that Epic was so hurt by Apple that its CEO even felt the need to handle things himself as if the company doesn't have scores of high-ranking personnel in charge of handling legal issues.

Fortnite is, I don’t know a gentle way to say this but, hated among hardcore gamers. Its highly polished cartoony feel, arguably wonky mechanics, physics and build mechanics do not appeal to all gamers. Or, every gamer aside from Fortnite fans, to be precise.

The hate against the game skyrocketed when “serious” fictional characters such as God of War’s Kratos, Halo’s Master Chief, Batman and The Mandalorian were introduced as playable skins. Why the hate, you might ask. As a longtime God of War fan, it's hard to see your favorite character doing childish dance moves. People believe it harms the legacy of a serious game, for the sake of money. I like to play Fortnite from time to time as well, but cross-overs should be in good taste and contextual.

And the trial has shown that Epic does not plan to stop its skin game. Samus Aran, the protagonist of Nintendo’s beloved Metroid series, Dwayne “The Rock” Johnson, The Bride from the Kill Bill franchise and many other skins are underway.

“A Fortnite version of arcade basketball” with an NBA collaboration is coming soon too, with LeBron James next in line. Why not, put a skin on it, right?

Epic shook the gaming scene when it gifted Grand Theft Auto V to everyone with an account. Its systems went down and became inaccessible for a long period of time. But GTA V was just the cherry on top. Epic pursued a very aggressive publicity campaign, especially in recent years, to promote its store which rivals Steam.

Giving away many prominent titles, including Civilization, Watch Dogs and of course, the heavy-hitter GTA V, came at a cost.

It seems like Epic is investing for the long-term and wants to be a one-stop-shop for PC gamers and replace Valve’s Steam. I highly doubt this will happen in the future, but Steam may not remain as the king in PC gaming either. It’s a hit or miss, and Epic is trying its best to get more people on board.

Sony is notorious when it comes to cross-platform play. It has rejected allowing players using different devices to come together to enjoy the same game – whether they’re holding Joy-Cons, DualSenses, Xbox controllers or a keyboard and mouse in their hands.

The trial has revealed that Epic is paying an extra sum to Sony to let PlayStation users compete against Xbox fans, Switch owners and PC master race believers. Normally, Sony would not let Fortnite players do this – if they were not so numerous.

But in September 2018, Sony gave in and let its user base clash against other consoles’ fans. With that decision, it both retained its user base, who would not have to buy other consoles to play Fortnite, and also continued to make some “V-bucks.”

Gaining permission from Sony, Epic has both made the Japanese company bow to their demands – and ironically, had to pay for it.

“Sony has a policy that requires if the ratio of payments across platforms for a given PS user gets out of sync with the playtime, then we have to pay them a commission on other platform revenue,” Epic’s Sweeney said, according to court documents, pointing to users who use the same account on both their iPhones and PlayStations but choose to make payments on their phones via Apple’s App Store.

Microsoft's Vice President of Xbox business development Lori Wright was asked during the trial whether the Seattle-based company profits from the sales of the green monster.

"Has Microsoft ever earned a profit on the sale of an Xbox console?" she was asked, replying with a simple "No."

According to Business Insider, Wright appeared as a witness in the ongoing trial. The Windows maker has so far openly supported Epic's fight against Apple.

The trial has revealed the obvious: Apple is making too much money all thanks to the App Store.

"In my expert report dated February 16, 2021, using Apple testimony and financial information available to me at that time, I calculated the App Store's operating margin percentage to be 79.6% for each of the fiscal years 2019 and 2018," he said.

A response from the Macbook maker did not take too long.

"Epic's experts' calculations of the operating margins for the App Store are simply wrong," a representative of the company told the Verge.

The figures seem a bit of a stretch as the nearly 80% operating margin seems pretty impossible but Epic has got a point: Apple is making too much money off the App Store.

But so does Epic. And it is somewhat more shameless. Let me tell you why.

Maybe the highlight of all the things revealed so far was this: Epic wants children to make impulse purchases – arguably to the detriment of their family budget.

U.S. Judge Yvonne Gonzalez Rogers recently pressed the chief executive of Epic Games on how the changes they are asking her to force on Apple would affect the livelihoods of millions of developers who make software for iPhones and iPads. After Sweeney testified that "Apple exercises total control over all software on iOS and can deny access to apps at will,” Gonzalez Rogers continued her questions to reveal a somewhat problematic mindset.

Sweeney wants the U.S. to order Apple to allow users to put third-party software onto their iPhones and ease its in-app payment rules. These changes would affect not only Fortnite but all other apps found in the App Store.

“So you don’t have any idea how what you are asking for would impact any of the developers who engage in those other categories of apps, is that right?” she asked.

"I personally do not," Sweeney said, in a veiled acceptance of the fact that he has not done his due diligence, not really caring about the repercussions of his decision. But the following remarks by Sweeney were even more striking.

The judge later asked Sweeney whether Epic’s demand to be free of Apple's in-app purchase requirements meant that it wanted the "Fortnite" user base, which includes many younger users, a prominent portion of which are school children, to have access to "what I would call, as a parent, an impulse purchase."

"What you are really asking for is the ability to have impulse purchases," Gonzalez Rogers told Sweeney.

"Yes," Sweeny replied, "customer convenience is a huge factor in this," he said.

That is problematic, plain and simple. Those iPhones and iPads are not in the hands of informed adults who are consciously parting with their money.

Fortnite has many in-app purchases, some of which could easily break the bank for lower-income families. And what Sweeney labels as “customer convenience” might translate to a struggling family economy.

For a gamer, I don’t choose sides in this battle; I think that both Apple and Epic have made mistakes. Epic has a point, and so does Apple.

But Epic Games’ battle against Apple is doomed to fail. Apple has been operating the App Store under the same principles for the last 10 years, and it is going just fine.

Apple should make further cuts to its operating margins to let more developers, particularly up-and-coming indie developers, on board. But what Epic is asking for can be likened to trying to sell goods at a shopping mall without paying rent.

I’m no fan of capitalism, but Epic is trying to defy its rules. And just as the Soviet Union collapsed, so will Epic if it does not comply.