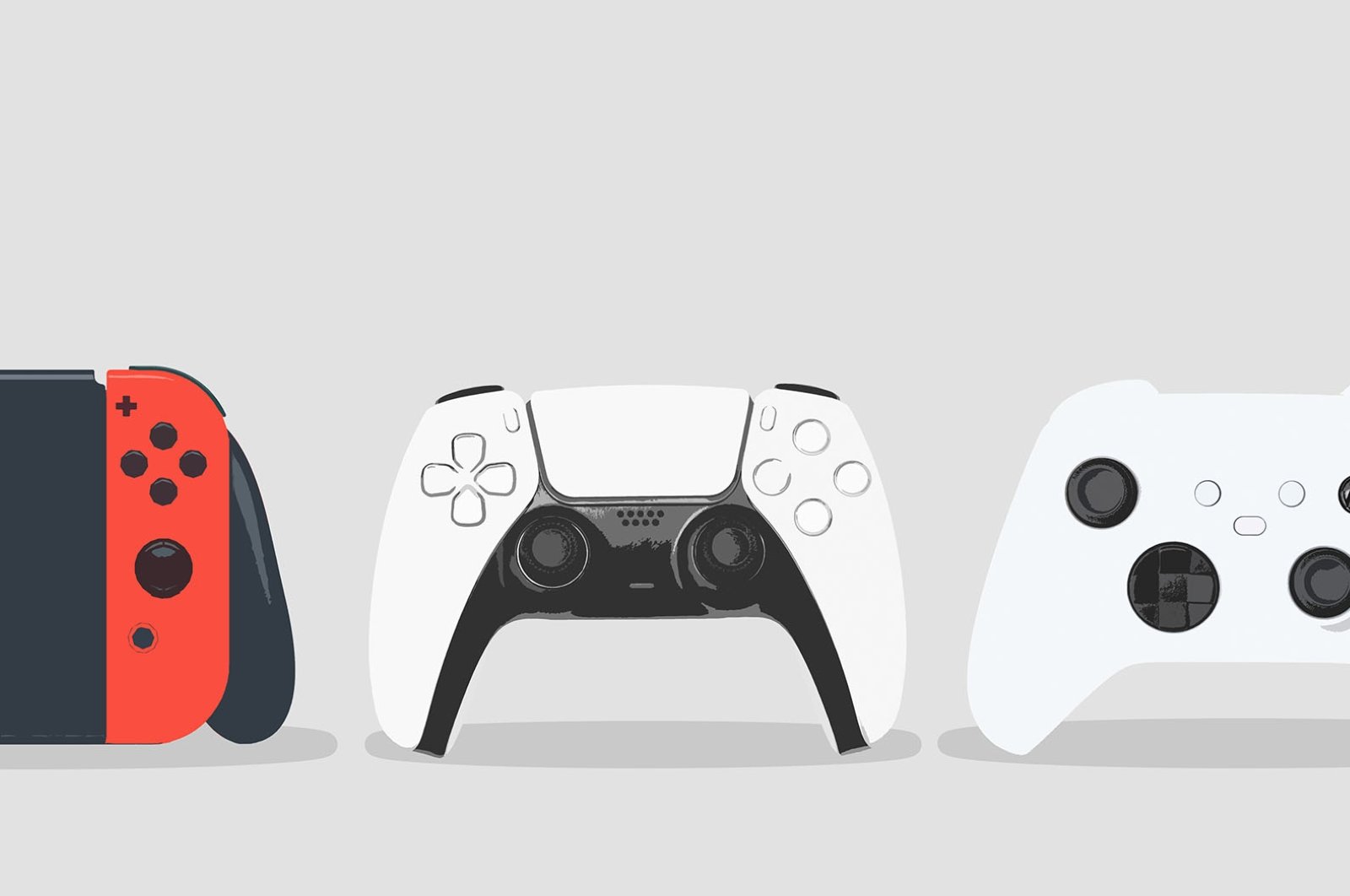 The video game industry has seen many contenders, and only three of them have survived in the console realm. The big three names continue their journey, albeit somewhat constrained to their own camp, which can be taken as a negative or a positive

Let me begin with a surprising fact: The PlayStation was not originally intended to be a standalone game console.

In the late 1980s, aka the times when Microsoft was only present in the PC side of gaming, Sony and Nintendo were partnering up for a peripheral that would power up the Super Nintendo Entertainment System (SNES), the king of the era in console gaming. PlayStation’s “father,” Ken Kutaragi was highly interested in video games and had a vision that would later save Sony from bankruptcy.

In 1988, Sony and Nintendo signed a deal that would bring the CD-ROM to the SNES in a move that would add muscle to the console with a whopping 700MB capacity. But things were not going well between the two Japanese gaming giants.

A day after Sony announced its SNES-compatible hardware “PlayStation,” Nintendo announced its new partnership with Philips in surprise to the entire audience of Consumer Electronics Show ’91, including Sony. After the backstab, which both parties blamed on each other, the divorce was official.

Nintendo, the once-unbeatable king of the console realm, created its ultimate rival with its decision. Kutaragi’s efforts to persuade Sony’s top brass to seek revenge from Nintendo worked. Sony quit all efforts to develop the then-add on PlayStation and started testing the waters for a full-blown standalone PlayStation. The father of the PlayStation changed the game, singlehandedly, once and for all.

After Commodore 64 and Atari’s domination in previous generations, Nintendo became a powerhouse in the console realm with its Nintendo Entertainment System (NES) and its successor SNES. There was no superior contender in sight. The Super Mario series was a huge hit, getting sequel after sequel.

At the dawn of the CD-ROM, Nintendo saw the opportunity but later blew it after getting at odds with Sony. The fight between the two companies led to the birth of Sony’s new standalone console PlayStation.

SNES was still the top choice among console gamers in the early 1990s to mid-1990s. But after the PlayStation was launched on Dec. 3, 1994, in Japan and in early 1995 in other countries, Nintendo’s absolute dominance was far from a reality.

With blockbusters being released for the PlayStation one by one, Sony’s new console proved that content was king. In addition to the then-PS exclusives the Crash Bandicoot series and Spyro the Dragon, many successful third-party titles with the PS branding were on shelves now.

There was another contender in the console realm back then: Sega. The now-game developer, then-console maker Japanese giant had two prominent rivals that hailed from Japan too. It was a surprising era, to say the least. The fact that the West lost hold of the console market and all three biggest contenders were Japanese was an astonishing thing. The sun was rising from the East.

But things were not so bright for once-king Nintendo: It had both local and global rivals now, albeit one less powerful than the other. Sega was not doing perfect with its Saturn, but Sony was preparing to dominate the console market with its shiny new PlayStation. Nintendo did not want to lose its throne but was slowly accepting the reality that Sony was going to be the new heir.

In 1996, two years after the PlayStation was released, Nintendo announced its highly successful console, Nintendo 64. The console became an American favorite. In Europe and many other regions though, PlayStation was still king.

Sega was ailing with its not-so-favorite Saturn. The real competition was between Sony and Nintendo, if, we can really call it a competition. Let’s look at the numbers, so you’ll understand what I mean.

Over its lifetime, just shy of 33 million Nintendo 64 consoles were sold. On the other hand, PlayStation topped over 102 million units. The winner is clear.

Years have come and passed and witnessed an unfair rivalry during the sixth generation of consoles. Sega tried its best with Dreamcast, died a hero’s death as a console maker and became a game developer.

Nintendo released the GameCube, selling 22 million units worldwide only to be crushed mercilessly by Sony’s PlayStation 2, which sold over 155 million units over its lifespan. With its first edition charismatic black box and the later much skinnier update, PlayStation 2 remains the most sold console of all time to this day.

Before the PlayStation 2’s release, another contender took center stage to take Sega’s seat as the second rival to Sony: Microsoft announced its mammoth Xbox console, which revolutionized the console market. With its embedded ethernet port, the Xbox Live service that let people purchase and download digital games back in 2001, all the while giving players the ability to voice chat during online game sessions, the new green monster was nightmarish for Sony and the PlayStation brand.

But PlayStation 2 was Sony’s masterpiece. It had games no other console did, and its sales were going strong. Nevertheless, Microsoft proved it was worthy of attention, selling over 30 million Xbox units worldwide.

The competition was among Sony, Nintendo and Microsoft now. With the unpredictably high success of Sony with the PlayStation 2, Nintendo understood it was downgraded (or, as time proved, upgraded) to the status of a niche console maker that appealed not to the mainstream but to true Nintendo fans.

Microsoft was not giving up the competition. As Sony struggled with PlayStation 3 on the technical side, Microsoft found some success with Xbox 360 in the seventh generation — until the “red ring of death” incident. As a hardware deficiency fried Xbox 360 consoles, Sony kept its throne with PlayStation 3. However, Microsoft made a comeback after fixing the heating issue with two later iterations.

What was Nintendo doing in the seventh generation, you might ask. They did the right thing: They accepted the fact that they were a fan favorite and niche, and they lost their appeal to the mainstream. Soon, they announced the Wii. Unlike any other console at the time with its heavy emphasis on motion control, Wii was a fun console for the whole family. Nevertheless, it was too light for a hardcore gamer that favored graphically and mechanically stronger games.

But that was the path time forced Nintendo to pursue, and it was the right one.

Nowadays, Nintendo seems heavy on that “Nintendo Magic” with its shiny, easy-for-beginners, fun and colorful games, and its trademark characters like Super Mario. It also releases triple-A titles like Zelda, and hardcore gamers also find what they want in a Nintendo Switch, too. There are Doom, Wolfenstein and other first-person shooters on the console. There are beautiful role-playing games (RPGs) like Obsidian’s Outer Worlds. There’s Astral Chain for fast-paced futuristic action, and there’s also CD Projekt Red’s masterpiece Witcher 3, aptly nicknamed Switcher 3.

But there’s something very niche about the Switch. It is portable. It is not so strong with regards to muscle, and it is the unofficial home for indie games. Nintendo is doing an excellent job at finding the middle ground between hardcore gamers and fans of the so-called “Nintendo Magic”. But still, it is on the “unique and niche” route.

With many ups and downs in its history, the Xbox is not doing bad nowadays either. But Microsoft took another route, toward the budget and cloud gaming side of things.

Xbox One and the X/S Series are perfect consoles for the budget-conscious: buy a Game Pass subscription and have access to a library of dozens of games. Microsoft is also moving the Xbox brand toward an ecosystem — one that lets you cloud play games even if you do not own a physical Xbox console.

What is Sony doing? Doing what it does best: releasing highly polished games and selling them for a premium. Nevertheless, Sony has also taken a page from Microsoft’s playbook and announced a “PlayStation Plus Collection,” which is similar to the Game Pass, albeit one does not grow with new games each month.

To sum it all up: Time has provided a balance between Sony, Microsoft and Nintendo in the console realm. Sony has always sold games for a premium and became the unofficial king among hardcore gamers. Microsoft is trying to move toward a physical console-less ecosystem, and focusing on cloud and budget gaming. All the while, Nintendo winks at hardcore gamers – who would use some mobility – with heavy titles such as Doom and Witcher, while providing a safe haven for indie lovers and continuing to consolidate its “Nintendo Magic” fans.

These are three worlds-apart strategies in today’s gaming scene. May competition become harsher and harsher each day, so we, gamers, benefit. With that said, it is a clear fact as evidenced by the chronology above that changing times have forced all these giants to pursue different routes. But that has been for the best. Gaming must be inclusive, and everybody deserves to find what they love in gaming.