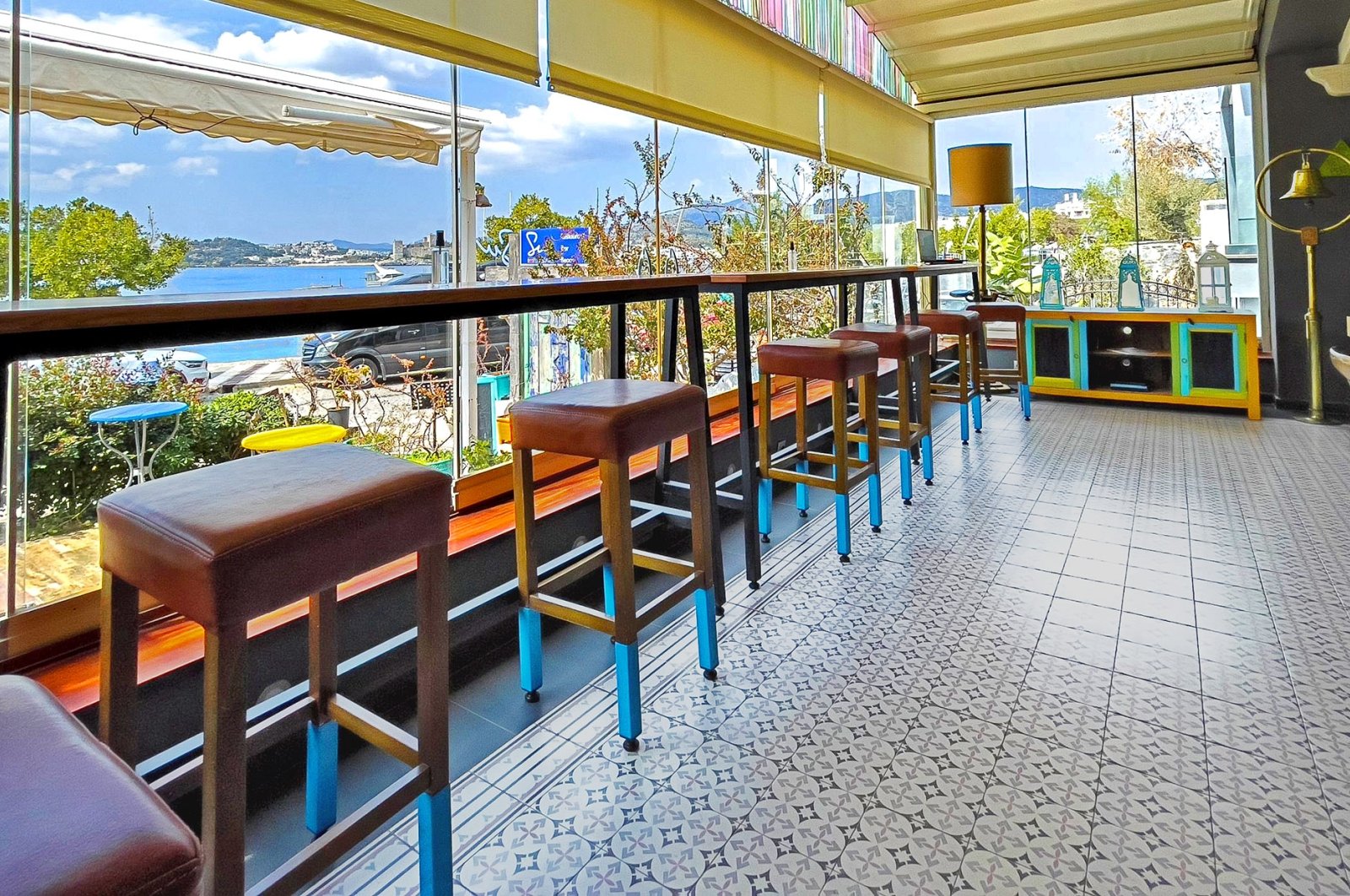 The new shared working space Bodrum Coworking in Kumbahçe. (Photo provided to the press)
by Leyla Yvonne Ergil Oct 26, 2021 8:54 am

Innovative coworking venues are popping up all over Turkey, including in popular holiday destinations such as Bodrum where one will be hosting an entrepreneur networking session this Thursday

Working remotely or as a digital nomad has become a way of life for much of the world, but it is especially developing quickly as a trend in Turkey. Many expatriates have adopted Turkey’s spectacular coworking spaces as their offices, giving them the chance to enjoy the shared working experience abroad.

There are a variety of impressive coworking spaces in Istanbul that double as popular event venues such as Kolektif House, which has multiple locations in Istanbul and hosts entrepreneur meet-ups, storytelling nights and Jam Sessions Turkey, an event series spearheaded by fellow British-Turk musician Melissa Clissold. Kolektif House also moved down south this summer, opening up a branch in Çeşme for the season. ATÖLYE is another such space that up until the pandemic served as the location for the expat platform Yabangee’s “Expat Spotlight” series, which took place monthly for a few years and showcased expats sharing their personal experiences about different avenues in Turkey.

Yet another valuable event hosted at a coworking space by expats will be taking place this Thursday, Oct. 28 at Bodrum Coworking, one of the newest coworking spaces to open up on the Turkish riviera. The event is a Startup Networking Session, hosted by Bodrum Online Entrepreneurs, and is intended to be an opportunity to catch up with those in the region and to welcome the new arrivals in the startup ecosystem that have made Bodrum their home. Organizer and German expat David Henzel is a big deal in the world of online entrepreneurism and a mastermind at managing happiness. He also presents the podcast “How We Solve,” in which he recently hosted legendary scientist and animal behaviorist Temple Grandin.

Bodrum Coworking an office with a view!

Opened in January this year and situated in a spacious garden and terraced space by the sea in Kumbahçe overlooking the Bodrum bay and castle, Bodrum Coworking has ample indoor and outdoor working spaces, offices and meeting rooms. There are affordable daily, weekly and monthly membership options, all with free amenities including coffee. Many foreigners have jumped on the bandwagon this summer by becoming regular members.

Co-founded by Ersin Pamuksüzer, a senior level businessperson-turned-wellness expert who is the pioneer behind The Life Co., Bodrum Girişimcilik is behind this exciting new venture as well as three other startup incubator brands Helo! Bodrum, Bodrum Angels and Bodrum Living Lab.

Together, the four brands have hosted a number of interesting events and workshops such as Tango and Salsa Nights, the latter of which will take place this Tuesday, live musical performances, exhibitions and book signings as well as entrepreneurial meet-ups such as the networking event that will take place on Thursday from 8 p.m. to 10 p.m.

As The Life Co. is Turkey’s premier wellness retreat center (famed for its visiting regulars Kate Moss and Naomi Campbell), the international menu at Bodrum Coworking also places an emphasis on international and health-conscious cuisine.

Urla Coworking was the first to introduce the shared office concept to Turkey’s lower hemisphere by creating a shared workspace and event space in the heart of Izmir’s Urla. The brainchild of a Belgian and Turkish partnership, the coworking space is just one aspect of Stage-Co, the brand behind it all. A jack of all trades visual and virtual, Belgian expat Patrick Bosteels is a serial entrepreneur devoted to startup acceleration and serves as a mentor, trainer and public speaker through Stage-Co. The company also opened a new branch this summer in the district of Güzelbahçe, which stands between Urla and Izmir’s city center.

For the past three years now, Urla Coworking has served as a shared office space for freelancers, entrepreneurs and startups and has hosted numerous events and workshops on its impressive Alternative Stage with 120 seats. There are weekly CoderDojo workshops, which are free computer programming and coding training sessions geared for children between the ages of 8 to 15. Services include a virtual office and landlines, mail and cargo, a hot desk, free coffee and meeting rooms. Workshops in the past have been centered on topics such as photography, animation and graphic design, music workshops for children, e-commerce events geared to female entrepreneurs and a primer on how to build a website. In July, Stage Co. recently opened a new quainter coworking space with a garden in Yelki, Güzelbahçe, aptly named Yelki Coworking.

Situated in the heart of Izmir’s Konak district, Withco is a spectacular three-story 3,500-square-meter (37,675-square-foot) space transformed into a modern and sleek coworking space from what was once a flower warehouse. Easily the coolest office in town, last year the innovatively designed coworking space was a winner for its refurbishment at the DNA Paris Design Awards 2020. There is a Starbucks upon the building’s entry, but the delectable Jules Meinl coffee is served up in unlimited quantities for members, who affectionately refer to themselves as “Withcolics.” There is a YouTube studio on site for members as well as a stylish “Healthy Living Canteen” serving up energizing dishes.

Originn Coworking in Bornova is another impressive venue with ample shared working space, offices and an event venue, which has hosted a wide variety of events in multiple genres. From yoga to book clubs, art and acting workshops and regular speakers, this venue is another excellent space to network and mingle. Plus the décor is industrial chic and it has the Originn Food Lab, specializing in tantalizing yet healthy fare.

Hipokampüs Office in Fethiye is a wonderful shared working space in a sleek environment with indoor and outdoor seating in a low key area close to the sea in this holiday hub town. Lokal Cowork is another excellent venue to serve as a second “home away from home” office, literally, since the building is reminiscent of a two-story home. The interior is modern with ample and comfortable workspace as well as a patio.