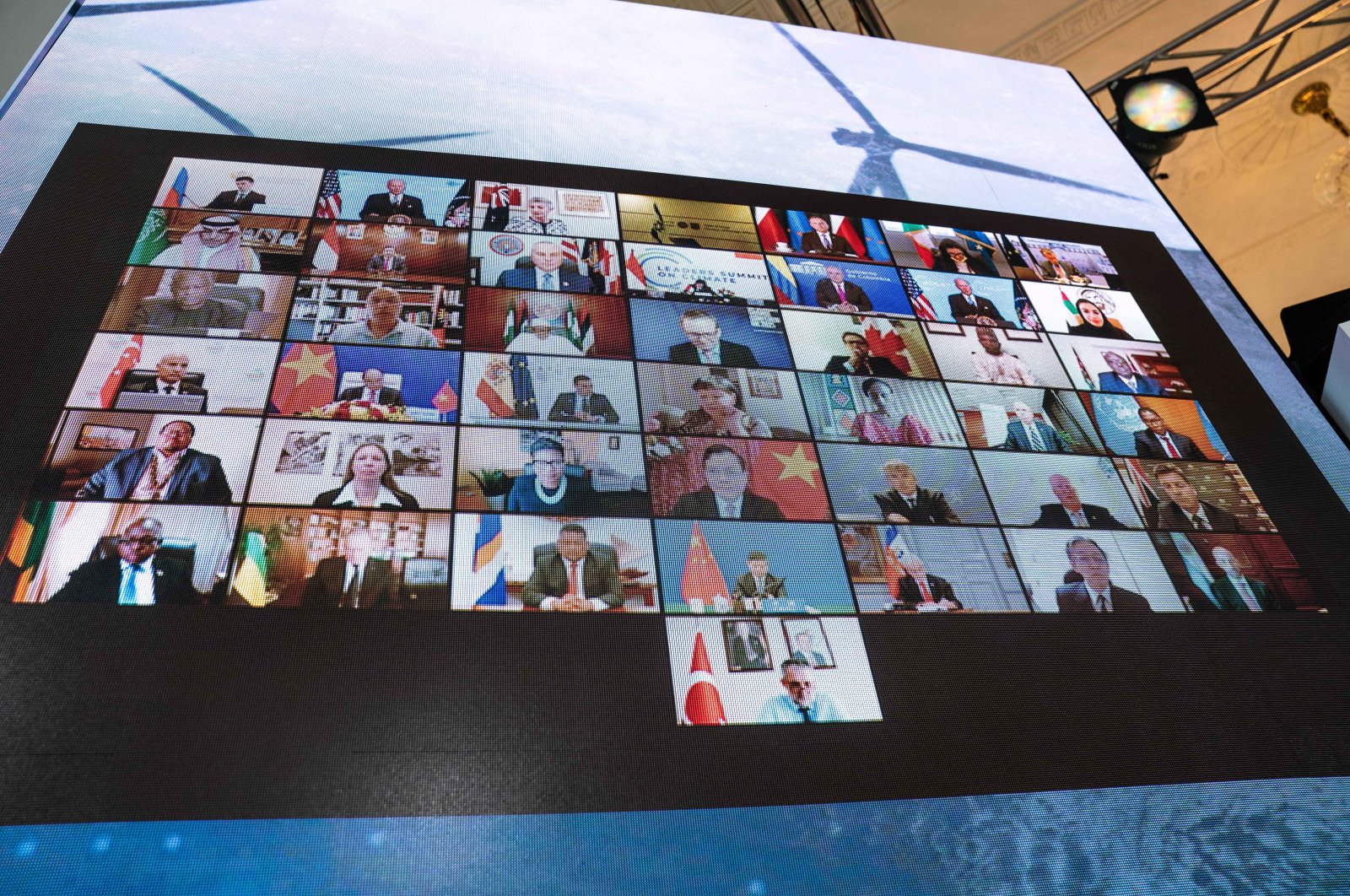 World leaders are displayed on a screen in the East Room of the White House during the virtual Leaders Summit on Climate, in Washington, D.C., U.S., April 23, 2021. (EPA Photo)
by ASSOCIATED PRESS Apr 23, 2021 6:50 pm
RECOMMENDED

On the second day of the virtual climate summit held by U.S. President Joe Biden, world leaders shared their stories of how nations can break free of climate-damaging fossil fuels.

"We cannot win this fight against climate change unless we go globally to fight it together,” declared President Uhuru Muigai Kenyatta of Kenya.

He spoke as the White House devoted the second and final day of Biden's 40-leader summit to arguing for massive investment now to switch the United States and the rest of the world to cleaner and more prosperous economies for the long term.

Compared with the United States and other wealthy but carbon-dependent nations, Kenya stands out as a poorer nation closing the technology gap despite limited financial resources. It has moved within decades from dirty-burning coal, kerosene and wood fires to become a leading user and producer of geothermal energy, wind and solar power.

Biden has used the virtual summit – plagued by intermittent electronic echoes and other glitches – to showcase the U.S. return to international climate efforts after President Donald Trump's resolute withdrawal from the mission.

The coronavirus pandemic forced the summit into its virtual format, with Cabinet secretaries stepping in as emcees to keep the livestreamed action moving.

Biden also used the summit to make the case for his $2.3 trillion proposal to scrap crumbling U.S. infrastructure and rebuild with efficient, climate-friendly transport systems, electric grids and buildings.

"This is a moment for all of us to build better economies for our children, our grandchildren," Biden said Friday, standing at a lectern in the White House and facing a Zoom-style screen of listening leaders from around the world.

"We must ensure that workers who thrived in yesterday’s and today’s industries have as bright a tomorrow in the new industries," Biden said.

While technological development and wider use has helped make wind and solar power strongly competitive against coal and natural gas in the U.S., Biden said investment also would bring forward thriving, clean-energy fields "in things we haven't even thought of so far.”

It’s all in service of an argument U.S. officials say will make or break Biden’s climate vision: Pouring trillions of dollars into clean-energy technology, research and infrastructure will speed a competitive U.S. economy into the future and create jobs, while saving the planet.

Republicans are sticking to the arguments that Trump made in pulling the U.S. out of the 2015 Paris climate accord. They point to China as the world’s worst climate polluter – the U.S. is No. 2 – and say any transition to clean energy hurts American oil, natural gas and coal workers.

It means "putting good-paying American jobs into the shredder,” Senate Minority Leader Mitch McConnell, R-Ky., said on the Senate floor Thursday in a speech in which he dismissed the administration’s plans as costly and ineffective.

Much of the proposed spending to address climate change is included in Biden’s infrastructure bill, which would pay for new roads, safe bridges and reliable public transit, while boosting electric vehicles, clean drinking water and investments in clean energy such as solar and wind power.

Biden’s plan faces a steep road in the closely divided Senate, where Republicans led by McConnell have objected strongly to the idea of paying for much of it with tax increases on corporations.

The White House says administration officials will continue to reach out to Republicans and will remind them that the proposal’s ideas are widely popular with Americans of all political persuasions.

The closing day of the summit also featured billionaires Bill Gates and Mike Bloomberg, steelworker and electrical union leaders and executives for solar and other renewable energy.

Biden envoy John Kerry stressed the political selling point that the president’s call for retrofitting creaky U.S. infrastructure to run more cleanly would put the U.S. on a better economic footing long-term. "No one is being asked for a sacrifice,” Kerry said. "This is an opportunity.”

Presidents and prime ministers from around the world joined in to describe their own investments and commitments to break away from reliance on climate-damaging petroleum and coal.

On the summit's opening day Thursday, Biden pledged the U.S. will cut fossil fuel emissions as much as 52% by 2030. South Korea, Japan, Canada and South Africa also joined in specific new emissions efforts timed to the summit.

Different nations use different base years for their emission cuts so comparisons are difficult and can look different based on baseline years. The Rhodium Group said using the U.S.-preferred 2005 baseline, America is behind the United Kingdom but right with the European Union. It’s ahead of a second tier of countries that include Canada, Japan, Iceland and Norway.