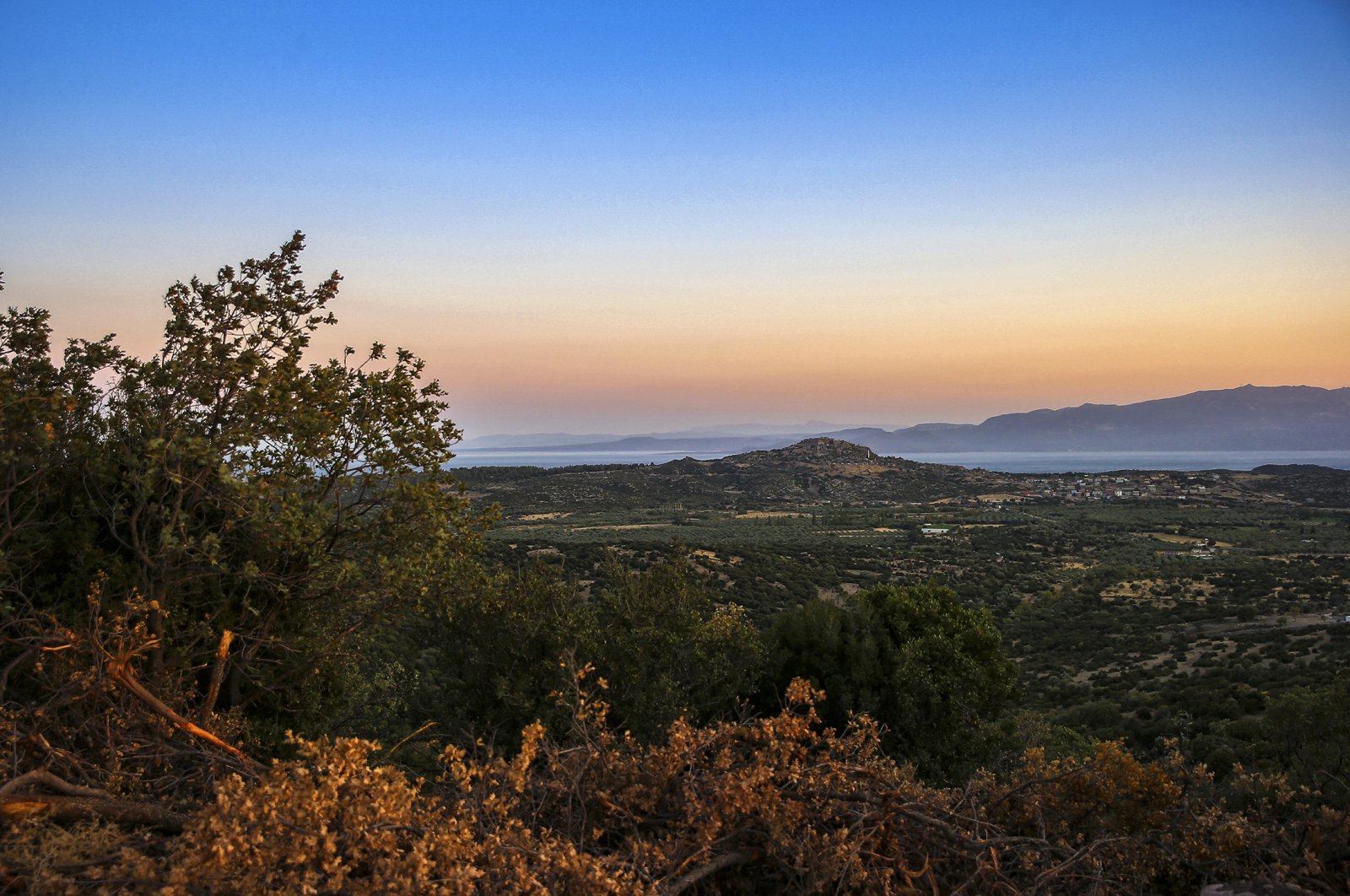 The view villagers will see from their houses at Nefes Assos. (Photo courtesy of Önder Halisdemir/Nefes Assos)
by Yasemin Nicola Sakay Feb 02, 2021 2:55 pm

Drained by the chaos and consumerism of city life, a group of Turkish professionals seek to build a culture of eco-consciousness in Assos by establishing Turkey's first sustainable ecovillage

Right across from the ancient city where Aristotle founded his very own philosophy school after leaving the Platonic Academy in Athens, a group of Turkish professionals are planning to establish Turkey's first sustainable village.

According to Önder Halisdemir, the founder of Nefes Assos, the village comes as an answer to the growing problem of overcrowdedness in popular seaside resort towns such as Çeşme in western Izmir and Bodrum in southwestern Muğla province. In time, these small towns have turned into small bustling cities of their own, with their infrastructure and superstructure failing to accommodate such large populations. The COVID-19 pandemic and subsequent lockdowns have once again revealed how inadequate municipalities are in dealing with a large exodus of city folk. Tooting car horns and crawling traffic or loud music shaking the walls have also pushed people to seek quieter and virgin alternatives untainted by the masses for a truly relaxing holiday in recent years.

The idea of this project sprouted five years ago in a time when Halisdemir was traveling, reading and examining ecological villages around the world. Plan A in life for him and many others was to live in a metropolis and pursue a high-flung career but a series of events, such as those related to climate change, and spiritual experiences led him toward coming up with a better plan B.

"I noticed that many white-collar senior and mid-level managers were also thinking about (a new life)," he said. Whether it was 21st-century disasters awaiting humanity as a whole, or Istanbul's metropolitan problems and fears of the big earthquake, plan B proved to be a necessity with every passing day. Then his path crossed with Assos.

After seeing many people fail at their new "village life" after having moved into farmhouses away from the city on their own, Halisdemir saw that taking such a big step not only put great financial strain on the individual but also often lacked the necessary social connection humans craved when moving somewhere new. A collective move could be the answer to these problems, he thought.

With 10 like-minded families, Halisdemir started searching for land. This search led them to the conclusion that they needed to establish a new social ecosystem that was fit for the needs of the 21st-century human.

"Upon coming across Assos and seeing its perfect location, we thought why not invite others into this journey and decided to establish our own village."

Even though the land for the village was bought five years ago and the team was planning to commence work around the inauguration of the Çanakkale 1915 Bridge, Halisdemir said the pandemic had caused a shift in their priorities and they decided to bring forward the schedule to make it in time for the bridge's official opening. They now project the village to be ready to welcome residents by spring 2022.

But why Assos of all places and why not another hidden gem in the Aegean?

"Assos is a very special and precious part of the Mount Ida ecosystem. Not only do you breathe quality air but you also get the most restful sleep in your life out there," Halisdemir said.

Mount Ida, also known as Kaz Dağları in Turkish, spans the Gulf of Edremit where Çanakkale and Balıkesir meet and is the perfect intersection of many ecosystems. The town of Assos, which is situated at the bottom of Mount Ida, also sits in a very favorable spot –down below it has the waters of the Aegean, rich in marine life, perched atop a hill it basks in the sunlight and those strong mountain breezes even have the force to power wind turbines.

The fact that Assos is blessed with the sun 11 months of the year also makes it the perfect place to utilize solar power for the village's energy needs. Halisdemir said Nefes Assos will be the first village settlement to be fully powered by solar energy.

He says it was only natural and inevitable that this village, "a shelter from the threats of 21st century," generated its own energy.

"We have seen that we can achieve this by keeping user comfort high and arranging the infrastructure accordingly. The (electrical) grid will only play a supporting role at Nefes, not as the lead. Houses will be heated by air source heat pumps (ASHP), which will be fed by electricity, in essence, still generating energy through the sun and nature."

The village will be built on 65,000 square meters (699,000 square feet) of land, use 10% of the land for settlements and have a low population density with all houses standing as detached structures.

The village also plans to shrink its water footprint by designing its common water tanks, reserve areas, water treatment systems and wells in a way that feeds off multiple sources and can withstand cuts and shortages. Drip irrigation will be the preferred method in agricultural activities, while drainage will enable the water to be used again. Water used by households and the hotel will be treated and recycled as gray water. The hotel project was awarded a grant by the European Union's harmonization program in 2020.

Halisdemir acknowledges that they as a team have shortcomings and hence have decided to collaborate with experts in their fields to bring the best of the best to the table.

The village architect is Han Tümertekin; Sigma will deal with all things engineering; Dr. Ayşegül Çoruhlu will be in charge of health care; Bureau Veritas in charge of project management and Sibel Senna Yılmazer will take the lead in landscaping. For agriculture and farming, Halisdemir said they went to Komşuköy, the name behind the FarmVille-like farm in Istanbul's Beykoz district that prides itself on planting and harvesting GDO and chemical-free organic produce.

"Since agriculture is not our expertise, we have been collaborating with Komşuköy, an established business known for introducing respected brands and people to garden management for over 10 years now. Our farmers will be operating our farmlands and gardens, but we'll also be working with the Komşuköy team as we do not want to use pesticides. Komşuköy will be monitoring the whole process as well as training our staff on more sustainable farming practices. We will grow our own, healthy, delicious, natural and chemical-free vegetables at Nefes Assos," he said, adding that while village residents enjoy their homegrown seasonal produce, visitors will also be able to buy from the surplus.

The village will also have its own marketplace/bazaar, located on the outer borders. This way, the marketplace will serve both the residents of the village as well as outsiders by selling village-grown produce to create revenue. For fruit or vegetables that don't or can't grow in the village's farmlands, Nefes Assos will sign deals with reliable and vetted suppliers to meet such needs, adds Halisdemir.

Nefes Assos will also include many sustainable social structures to encourage interaction. True to life in small towns, the village will have its own coffeehouse and even a village institute to promote research and knowledge-sharing. The village will even house a hotel with 20 rooms for guests to stay.

Ecological, social sustainability and economic sustainability are the pillars of Nefes Assos. Halisdemir, who comes from a background in finance and investment, said that they do not consider the village a real estate project but as a journey to create a life worth living.

Halisdemir said they believe humans can live a life in which the air they breathe, the food they eat and the environment they are in is of top social and physical quality, in which humans are the subjects of their lives again, and can lead a lifestyle that fills you with energy, is self-sufficient, safe, peaceful and active that prioritizes being present in the moment and seeks balance in everything. And having these qualities and values is exactly how luxury can be defined in the 21st century.

Behind this project is Halisdemir and his multidisciplinary team made up of best-in-the-field experts working on the architecture, engineering, infrastructure and social sustainability aspects of the village. They collectively have created a list of standards and values called Nefes Assos Standards (or NAS for short) that they say will be a good reference for similar projects in the future. This checklist includes rules and best practices for agriculture, renewable energy, animal husbandry, social sustainability and administrative tasks.

"We want to be sustainable in every sense and ensure its continuity. We will be, in a sense, setting the standard for work in the area of sustainability in Turkey. We want to be the exemplary human settlement of the 21st century and plan to develop the most respectful life for people and nature," he added.

No luck of the draw

Not everyone will have the opportunity to start a new life at this village, though. To preserve social and cultural harmony and create synergy, Halisdemir said the village's residents will be selected according to NAS.

There is a Russian proverb that says, "Don't buy the house, buy the neighborhood," which Turks hold true to heart. That's what the Assos team will base their selections on.

On the other hand, Halisdemir said, to feed the self-sufficient dynamics of the village ecosystem, it is important to bring together artists, academics, doctors, engineers and businesspeople from various backgrounds but still share a common dream and values. However, it seems that Halisdemir and his team have tough choices ahead.

"We've seen such a qualified and intense interest that choosing and narrowing it down will be very difficult for us. Just so we do not offend eligible applicants, we have even started thinking about establishing a new town, but we'll just have to wait and see."