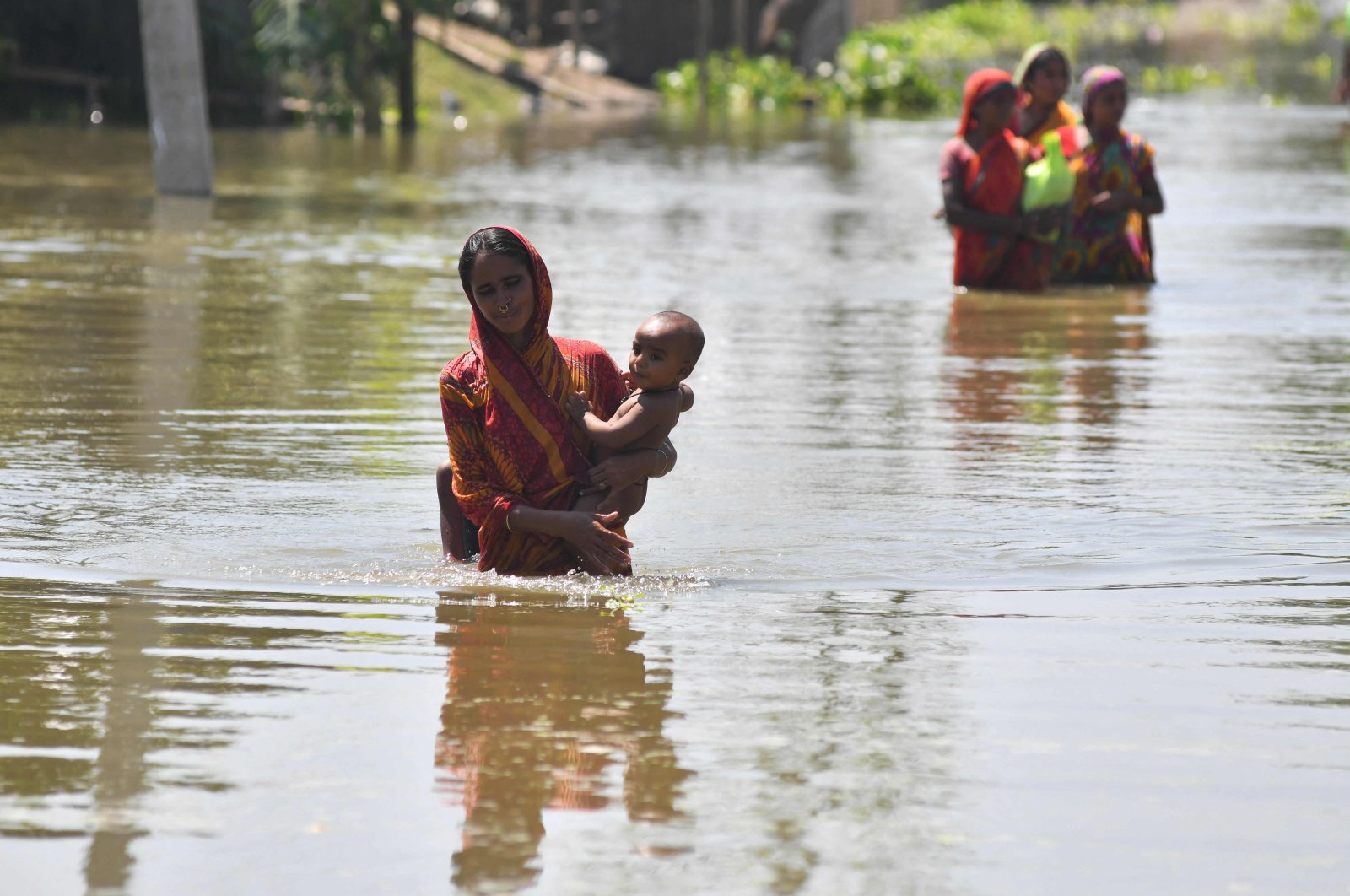 A woman carrying her child wades along a road in a flood-affected area following heavy monsoon rainfalls in Morigaon district in India's Assam state, Aug. 31, 2021. (AFP Photo)
by ASSOCIATED PRESS Sep 01, 2021 11:51 am
RECOMMENDED

A new report by the World Meteorological Organization (WMO) showed that the number of extreme weather or climate-related disasters has increased significantly since 1970.

But these disasters are killing far fewer people. In the 1970s and 1980s, they killed an average of about 170 people a day worldwide. In the 2010s, that dropped to about 40 per day, the World Meteorological Organization said in a report Wednesday that looks at more than 11,000 weather disasters in the past half-century.

The report comes during a disaster-filled summer globally, including deadly floods in Germany and a heat wave in the Mediterranean, and with the United States simultaneously struck by powerful Hurricane Ida and an onslaught of drought-worsened wildfires.

“The good news is that we have been able to minimize the amount of casualties once we have started having growing amount of disasters: heatwaves, flooding events, drought, and especially... intense tropical storms like Ida, which has been hitting recently Louisiana and Mississippi in the United States,” Petteri Taalas, WMO’s secretary-general, told a news conference.

“But the bad news is that the economic losses have been growing very rapidly and this growth is supposed to continue,” he added. “We are going to see more climatic extremes because of climate change, and these negative trends in climate will continue for the coming decades.”

In the 1970s, the world averaged about 711 weather disasters a year, but from 2000 to 2009 that was up to 3,536 a year or nearly 10 a day, according to the report, which used data from the Centre for Research on the Epidemiology of Disasters in Belgium. The average number of yearly disasters dropped a bit in the 2010s to 3,165, the report said.

Most death and damage during 50 years of weather disasters came from storms, flooding and drought.

More than 90% of the more than 2 million deaths are in what the U.N. considers developing nations, while nearly 60% of the economic damage occurred in richer countries.

Susan Cutter, director of the Hazards and Vulnerability Research Institute at the University of South Carolina, noted progress in learning to live with risk and protecting ourselves.

“On the other hand, we’re still making stupid decisions about where we’re putting our infrastructure,” she said. “But it’s OK. We’re not losing lives, we’re just losing stuff.”

Samantha Montano, an emergency management professor at the Massachusetts Maritime Academy and author of the book “Disasterology,” said she worries that death tolls may stop decreasing because of the increase in extreme weather from climate change especially hitting poorer nations.

“The disparity in which countries have had the resources to dedicate to minimizing disaster deaths is of huge concern,” particularly due to climate change,” she said. “Deaths decreasing in recent decades does not mean that they will continue to do so unless we continue to invest in these efforts.”

Hurricane Ida is a good example of heavy damage and what will probably be less loss of life than past major hurricanes, Cutter said. This year, she added, weather disasters “seem to be coming every couple weeks,” with Ida, U.S. wildfires and floods in Germany, China and Tennessee.

The five most expensive weather disasters since 1970 were all storms in the United States, topped by 2005’s Hurricane Katrina. The five deadliest weather disasters were in Africa and Asia – topped by the Ethiopian drought and famine in the mid-1980s and Cyclone Bhola in Bangladesh in 1970.