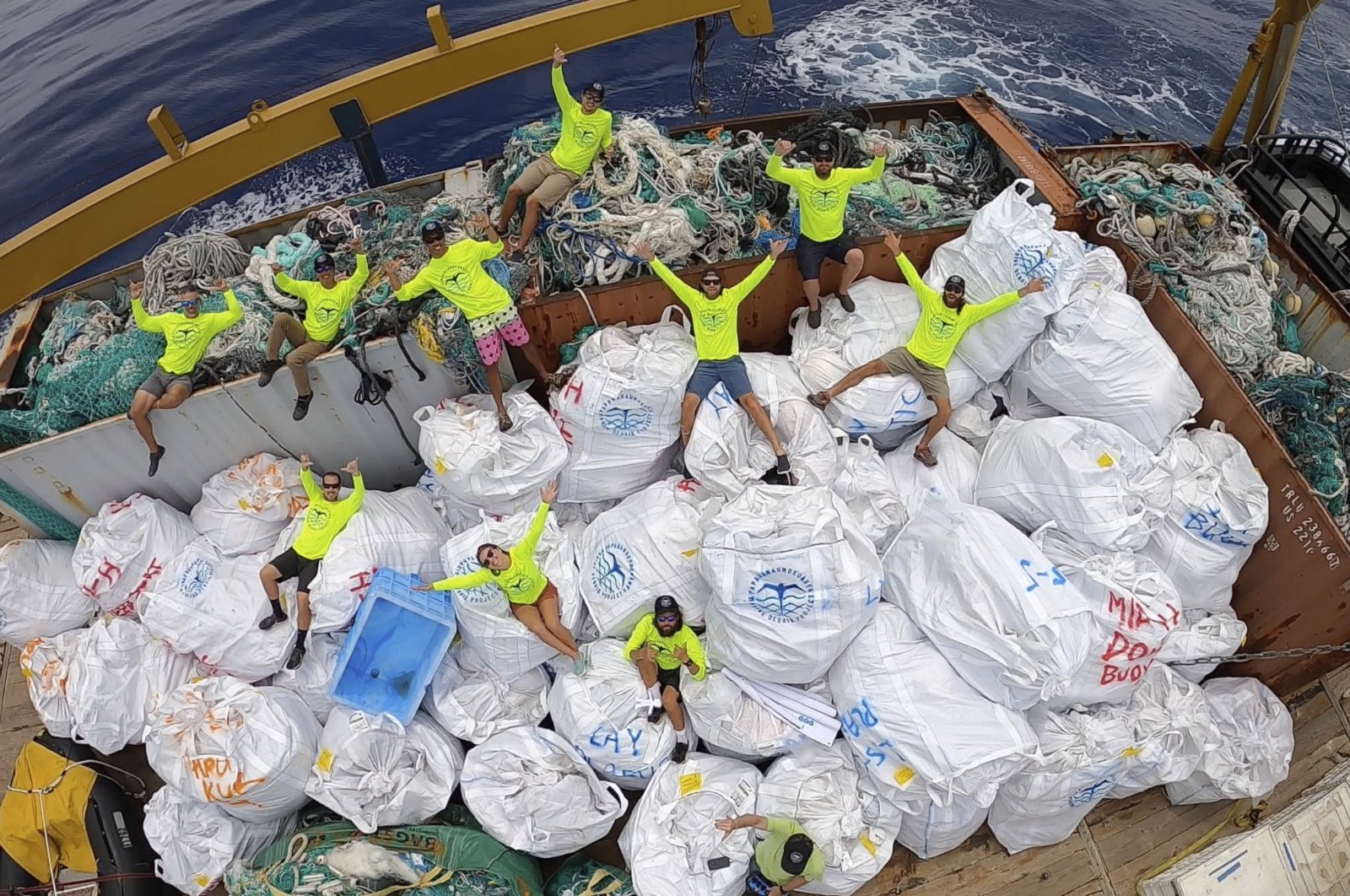 The Hawaiian archipelago, a collection of islands, atolls, numerous smaller islets, and seamounts in the North Pacific Ocean, is home to several dazzling and exotic creatures who are usually undisturbed in their habitats and yet can't escape the pollution.

A crew recently journeyed to clean the islands and returned this week with a boatload of marine plastic and abandoned fishing nets that threaten to entangle endangered Hawaiian monk seals and other animals.

The cleanup effort in Papahanaumokuakea Marine National Monument lasted three weeks and the crew picked up more than 47 tons (43 metric tons) of "ghost nets" and other marine plastics such as buoys, crates, bottle caps and cigarette lighters from the shores of the Northwestern Hawaiian Islands.

The monument, the largest protected marine reserve in the U.S. and one of the largest in the world, is in the northern Pacific Ocean and surrounded by what is known as the Great Pacific Garbage Patch, a huge gyre of floating plastic and other debris that circulates in ocean currents.

The islands act like a comb that gathers debris on its otherwise pristine beaches. The ecosystem in the monument is diverse, unique and one of the most intact marine habitats on Earth.

However, the beaches are littered with plastic and nets that ensnare endangered Hawaiian monk seals, of which there are only about 1,400 left in the world, and green turtles, among other wildlife.

The crew removed line from a monk seal on the expedition’s first day. With virtually no predators, the islands are a haven for many species of seabirds, and Midway Atoll is home to the largest colony of albatross in the world. There, the land is littered with carcasses of birds that have ingested plastics and died.

The cleanup was organized by the nonprofit Papahanaumokuakea Marine Debris Project, which partners with the state of Hawaii and federal agencies, including the National Oceanic and Atmospheric Administration (NOAA) and the U.S. Fish and Wildlife Service.

Kevin O’Brien, president of the new organization and a former NOAA employee, said the work is expensive but important.

"Talking to some of these folks that are up there for the monk seal camps every summer, they’ll talk about specific nets that have been there for several years,” O’Brien said. "So a trip like this where we’re able to yank pretty much everything we see can have an impact.”

The latest expedition focused on the shorelines of the various atolls, and a trip later this year will remove nets from the reefs that surround the islands. A NOAA study estimated that the shores of the Northwestern Hawaiian Islands accumulate about 57 tons of debris each year.

An analysis of the upcoming reef removal is expected to estimate the total amount of debris that gathers on both the beaches and the critical reef ecosystems that surround them, giving researchers a more complete view of the problem.

Matt Saunter, president of the Kure Atoll Conservancy, was among those working on the expedition. He's spent more than a decade doing monthslong field work on Kure Atoll. He rode out the first nine months of the coronavirus pandemic isolated there with a small crew and returned in November to a new world.

He said being back on his "home away from home” in a new role was a unique experience. "I definitely always wanted to remain involved with work being done in the monument, but I thought maybe I could try it at a different capacity,” Saunter said.

While on Kure, which is managed by the state of Hawaii and has a year-round team of workers, the crew dropped off new staff and picked up one to return home. They also resupplied the remote field camp. The Kure field crews had about 13 tons of debris collected over three years, and it was ready to be picked up when the ship arrived.

The marine monument is also a valued Native Hawaiian cultural site, and Hawaiian ceremonies were conducted each day of the trip. The cultural protocols honor the islands and seek permission to work in this rarely visited part of the world.

"Papahanaumokuakea is one of the most amazing landscapes on Earth, central to many Native Hawaiian narratives - a place where nature and culture are one,” said Athline Clark, NOAA's superintendent for the marine monument.

"It sustains the most vulnerable Hawaiian wildlife species, and nearly all of its habitat is used by seabirds, turtles and seals for critical nesting, burrowing, basking and pupping.”

The monument is also home to the famed World War II Battle of Midway, where researchers recently found sunken Japanese warships that were lost in the fight.

Most of the debris that was brought back will be incinerated and turned into electricity that powers homes and businesses on Oahu.

Some of the gear will be set aside for student recycling projects, and a number of the fishing nets will be taken to Hawaii Pacific University’s Center for Marine Debris Research for a study that's trying to identify the sources of this fishing gear.