Firefighters acquire new technology to push back wildfires in US 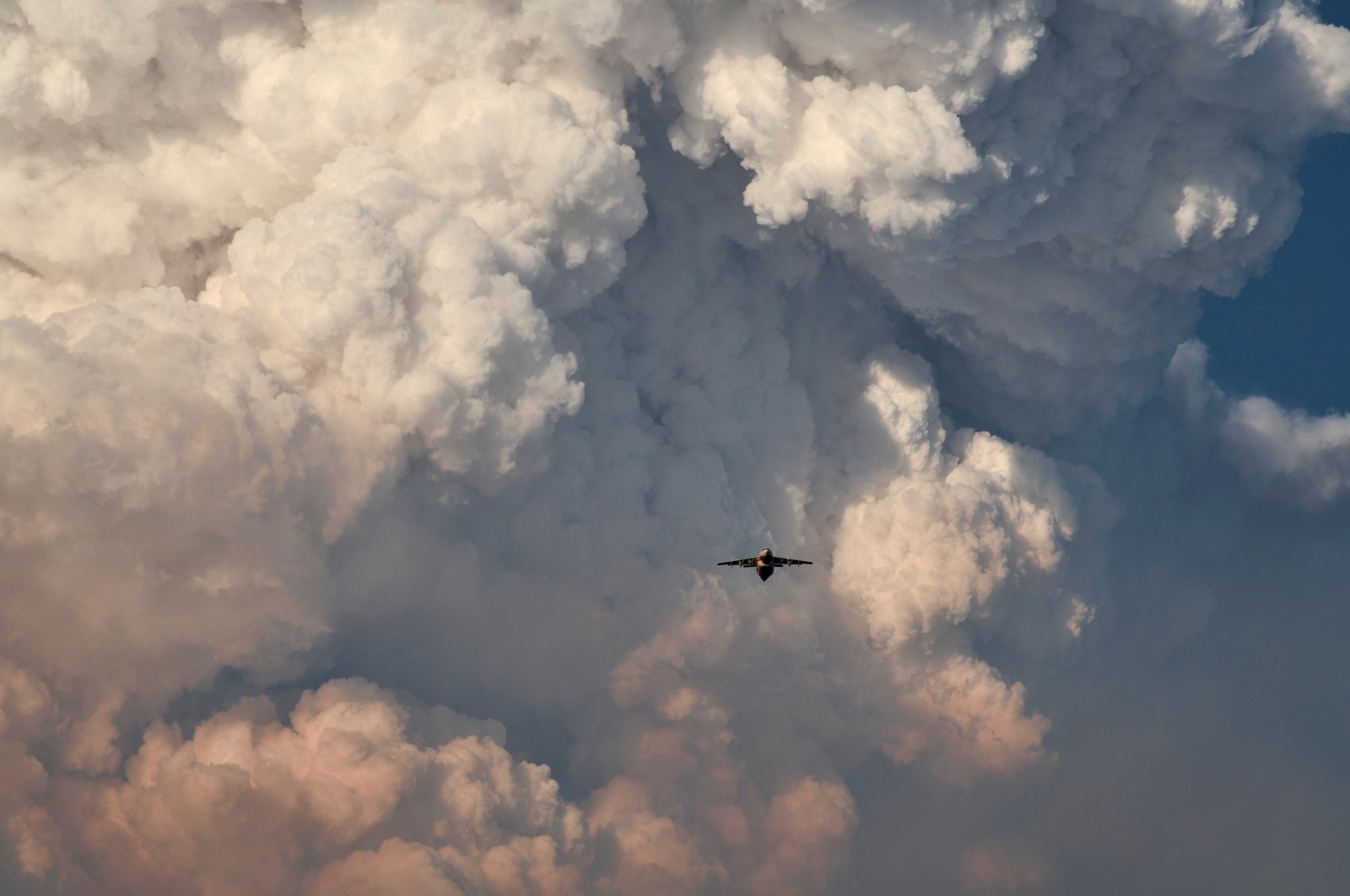 A firefighting aircraft returns to base amid massive plumes of smoke after dropping flame-retarding chemicals on the Bootleg Fire, as it expands to over 225,000 acres, in Bly, Oregon, U.S., July 15, 2021. (Reuters Photo)
by Associated Press Jul 24, 2021 6:57 pm
RECOMMENDED

As droughts and the increasing effects of climate change amplify wind-driven wildfires across the American West, transforming them into ever more dangerous conflagrations over time, firefighters are trying to stay a step ahead by developing new and smarter ways to prepare for their arduous jobs.

They're using new technology and better positioning of resources in a bid to keep small blazes from erupting into mega-fires like the ones that torched a record 4% of California last year, or the nation's biggest wildfire this year that has charred a section of Oregon half the size of Rhode Island.

There have been 730 more wildfires in California so far this year than last, an increase of about 16%. But nearly triple the area has burned — 1,200 square kilometers (470 square miles).

That includes using new fire behavior computer modeling that can help assess risks before fires start, then project their path and growth.

When "critical weather" is predicted – hot, dry winds or lightning storms – the technology, on top of hard-earned experience, allows California planners to pre-position fire engines, bulldozers, aircraft and hand crews armed with shovels and chain saws in areas where they can respond more quickly.

With the computer modeling, "they can do a daily risk forecast across the state, so they use that for planning," said Lynne Tolmachoff, spokesperson for Cal Fire, California's firefighting agency.

That's helped Cal Fire hold an average 95% of blazes to 10 acres (4 hectares) or less even in poor conditions driven by drought or climate change, she said. So far this year it's held 96.5% of fires below 10 acres.

Federal firefighters similarly track how dry vegetation has become in certain areas, then station crews and equipment ahead of lightning storms or in areas where people gather during holidays, said Stanton Florea, a U.S. Forest Service spokesperson at the National Interagency Fire Center in Boise, Idaho.

In another effort to catch fires quickly, what once were fire lookout towers staffed by humans have largely been replaced with cameras in remote areas, many of them in high-definition and armed with artificial intelligence to discern a smoke plume from morning fog.

There are 800 such cameras scattered across California, Nevada and Oregon, and even casual viewers can remotely watch wildfires in real time.

Fire managers can then "start making tactical decisions based on what they can see," even before firefighters reach the scene, Tolmachoff said.

Fire managers also routinely summon military drones from the National Guard or Air Force to fly over fires at night, using heat imaging to map their boundaries and hot spots. They can use satellite imagery to plot the course of smoke and ash.

"Your job is to manage the fire, and these are tools that will help you do so" with a degree of accuracy unheard of even five years ago, said Char Miller, a professor at Pomona College in California and a widely recognized wildfire policy expert.

In California, fire managers can overlay all that information on high-quality Light Detection and Ranging topography maps that can aid decisions on forest management, infrastructure planning and preparation for wildfires, floods, tsunamis and landslides. Then they add the fire behavior computer simulation based on weather and other variables.

"It's all still new, but we can see where it's going to take us in the future when it comes to planning for people building homes on the wildland area, but also wildland firefighting," Tolmachoff said.

Cal Fire and other fire agencies have been early adopters of remote imaging and other technologies that can be key in early wildfire detection, said John Bailey, a former firefighter and now professor at Oregon State University.

Some experts argue it's a losing battle against wildfires worsened by global warming, a century of reflexive wildfire suppression and overgrown forests, and communities creeping into what once were sparsely populated areas. Climate change has made the West hotter and drier in the past 30 years, and scientists have long warned the weather will get more extreme as the world warms.

Yet, the firefighters' goal is to replicate the outcome of a fire that started Monday in the canyon community of Topanga, between Los Angeles and Malibu.

It had the potential to swiftly spread through dry brush but was held to about seven acres after water-dropping aircraft were scrambled within minutes from LA and neighboring Ventura County.

What firefighters don't want is another wildfire like the one that ravaged the Malibu area in 2018. It destroyed more than 1,600 structures, killed three people and forced thousands to flee.

In another bid to gain an early advantage, California is buying a dozen new Sikorsky Firehawk helicopters – at $24 million each – that can operate at night, fly faster, drop more water and carry more firefighters than the Vietnam War-era Bell UH-1H "Hueys" they will eventually replace.

For all that, firefighters' efforts to outsmart and suppress wildfires is counterproductive if all it does is postpone fires in areas that will eventually burn, argued Richard Minnich, a professor in Riverside who studies fire ecology.

"No matter how sophisticated the technology may be, the areas they can manage or physically impact things is small," he said. "We're in over our heads. You can have all the technology in the world – fire control is impossible."

Working with wildfires is more realistic, he said, by taking advantage of patches that previously burned to channel the spread of new blazes.

Timothy Ingalsbee, a former federal firefighter who now heads Firefighters United for Safety, Ethics and Ecology, also said firefighters need to adopt a new approach when confronting the most dangerous wind-driven wildfires that leapfrog containment lines by showering flaming embers a mile or more ahead of the main inferno.

It's better to build more fire-resistant homes and devote scarce resources to protecting threatened communities while letting the fires burn around them, he said.

"We have these amazing tools that allow us to map fire spread in real time and model it better than weather predictions," Ingalsbee said. "Using that technology, we can start being more strategic and working with fire to keep people safe, keep homes safe, but let fire do the work it needs to do – which is recycle all the dead stuff into soil."