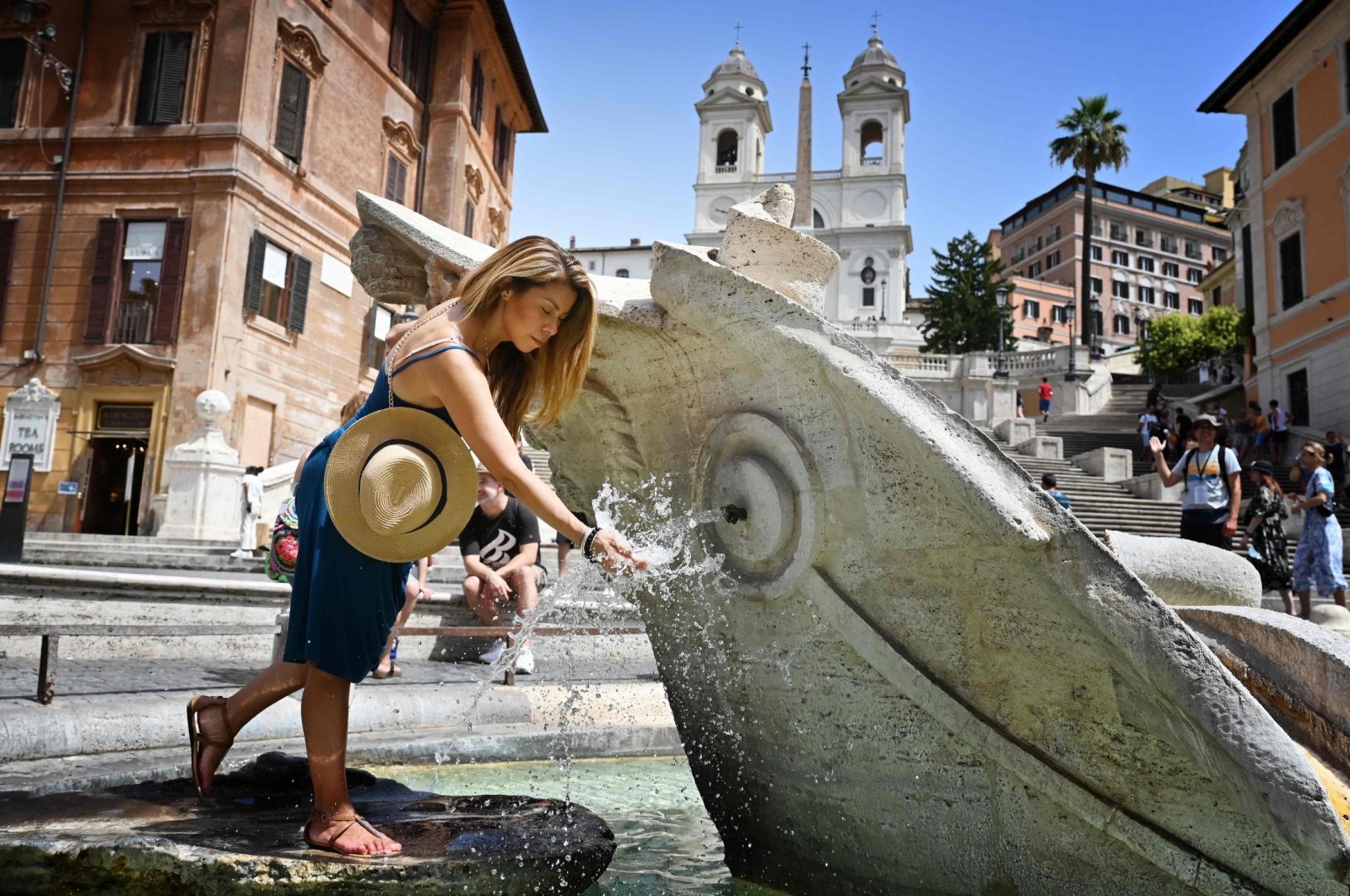 A woman cools off in the Barcaccia fountain at the Spanish Steps square in Rome as a sharp rise in temperatures is expected in the coming days with the intensification of the African anticyclone, Italy, Aug. 11, 2021. (AFP Photo)
by Agencies
Aug 11, 2021 3:33 pm

As major wildfires continued to rage across Italy, causing huge damage throughout the country, a blistering heat wave has also been sweeping the European nation, adding fuel to fires in the south. Sicily and Calabria were notable cities among the affected, while a UNESCO-designated natural park remains threatened.

Temperatures hit 47 degrees Celsius (116 degrees Fahrenheit) in Sicily on Tuesday, near Syracuse, with meteorologists warning that Italy's all-time record of 48.5 degrees Celsius, in Sicily in 1999, could be beaten on Wednesday.

Elsewhere in the south of Italy, the anticyclone dubbed “Lucifer” was forecast to send the mercury rising to 39-42 degrees Celsius Wednesday before sweeping northwards, with weekend temperatures of up to 40 degrees Celsius in the central regions of Tuscany and Lazio, which includes Rome.

The island of Sicily and the region of Calabria have already been battling fires throughout the summer – many caused by arson but fuelled by the heat – with firefighters recording 300 interventions in the past 12 hours, and the country's firefighters are stretched to their limit.

Seven fire-fighting planes were in the air again on Wednesday morning monitoring the spread of the blazes and dropping water on the conflagrations.

The Madonie mountain range, near the Sicilian capital Palermo, has for several days been besieged by flames that have destroyed crops, animals, homes and industrial buildings.

Sicily's governor, Nello Musumeci, called for a state of emergency to be declared for mountains, while Agriculture Minister Stefano Patuanelli visited Wednesday to meet local mayors.

On the mainland, the southern Italian region of Calabria has been particularly affected by the fires. The fire brigade has already been called out thousands of times this year to tackle fires in the region, though while this is far more than in 2020, it does remain somewhat lower than in 2017, which was a particularly bad year for forest fires.

In Calabria, the blazes are mainly affecting the territory of the Aspromonte mountain range, a national park and designated as a UNESCO area of international geological significance. Flames have already cut off a route to a church popular with pilgrims at this time of year, the ANSA news agency reported on Wednesday, forcing many to turn back.

The deputy head of environmental nongovernmental organization World Wide Fund for Nature (WWF) Italy, Dante Caserta, called for more resources, such as air support, to quell the flames "or it will be too late, and we will lose forever a priceless heritage."

Blazes have also devastated Sardinia, with 13 fires recorded during the day on Tuesday.

Over 20,000 hectares (50,000 acres) burned last month in the west of the island during the worst fires seen in decades.