Renewable energy dilemma: Ocean could be the solution 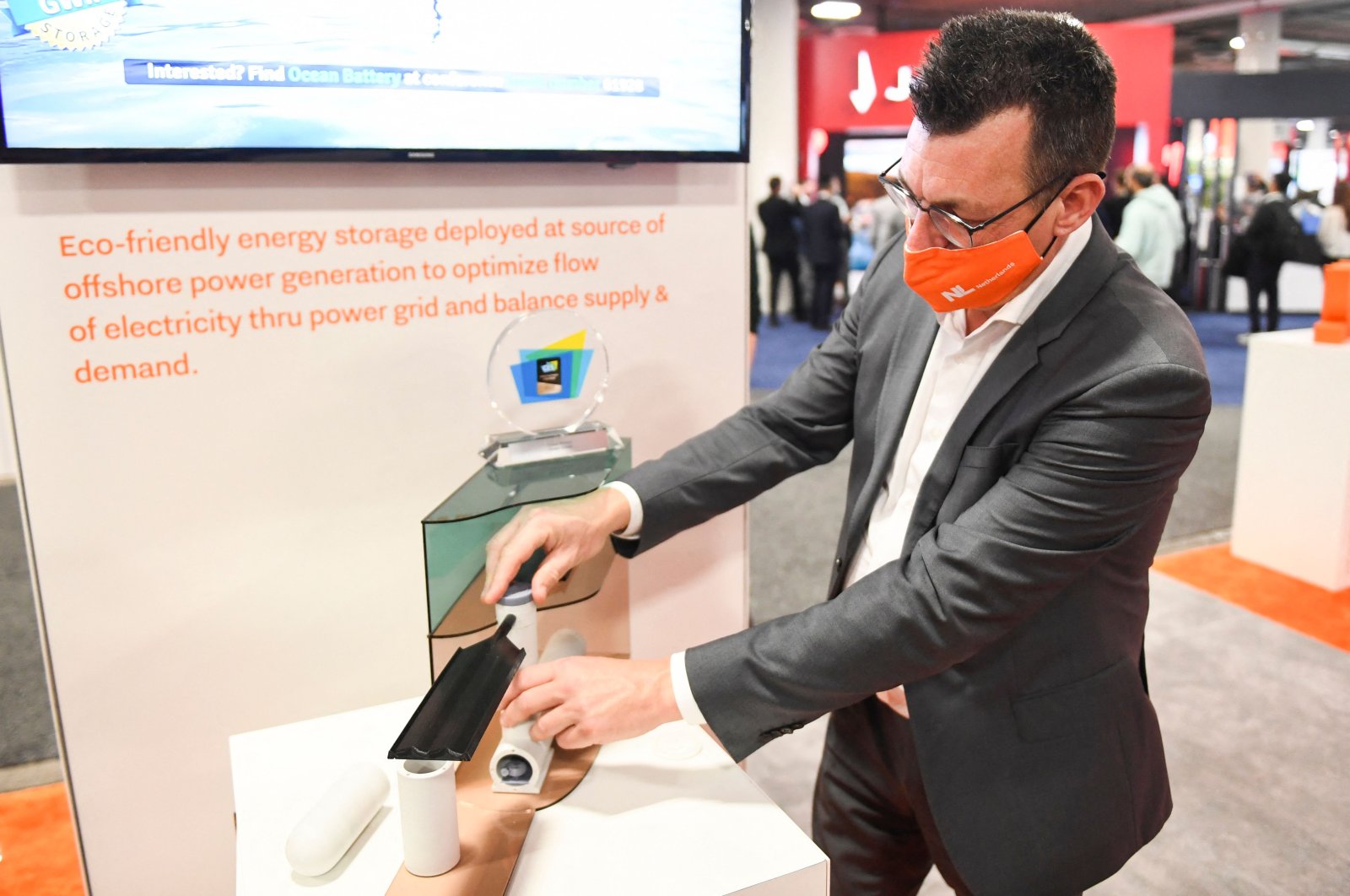 A wind turbine sitting idle on a calm day or spinning swiftly when power demand is already met poses a problem for renewables and is one researchers think can be tackled under the sea.

In one vision, offshore wind farms could use seawater to essentially store energy until it's needed, helping wean humanity off fossil fuels.

"We came up with a solution that we call the ocean battery," Frits Bliek, CEO of Dutch startup Ocean Grazer told Agence France-Presse (AFP) while showing off the system at the CES tech fair in Las Vegas.

Amid the growing push away from climate-warming energy sources like coal, stockpiling green energy is key, experts say.

That's because nature does not always deliver wind – or sun – at the moment when electricity is most in demand.

Bliek's "ocean battery" relies on massive flexible bladders on the seabed, which are filled up with seawater by the wind farm.

When the power is needed, the pressure of the ocean squeezes the water through the system on the seafloor that includes turbines – and the result is electricity.

A key consideration with energy is cost, and storage systems involving some type of battery are not only very expensive but also at risk of leaks or contamination in an ocean environment.

Systems that rely on pressure are already used in hydroelectric dams that pump water into the reservoir behind the dam when the electricity demand falls, effectively storing it to come back through the facility's turbines.

The U.S. Department of Energy traces the concept, called "pumped storage hydropower," to Italy and Switzerland in the 1890s, though facilities can now be found all around the world.

As for the underwater version of this type of storage, Ocean Grazer is not alone in trying to make it work.

Get rid of fossil fuels

FLASC, a spin-off of the University of Malta, has a system that uses renewably made electricity to pump water into a chamber that contains compressed air, which can then turn a hydraulic turbine to generate power.

Another initiative called StEnSea (Stored Energy in the Sea) uses hollow concrete spheres under the pressure of the deep ocean and was tested in a German lake in 2016.

Bliek, CEO of Ocean Grazer, said undersea systems take advantage of the naturally occurring pressure below the ocean's surface while creating a system that he said is about 80% efficient in storing energy.

He sees storage systems as key for renewables, which have boomed as the price to produce such energy has dropped and made them a steadily growing part of the energy mix worldwide.

Renewables are the fastest-growing source in the United States, increasing 42% from 2010 to 2020, according to the nonprofit Center for Climate and Energy Solutions.

Yet deploying systems like the "ocean battery" on the scale needed to work as part of an electricity grid is still years away.

Bliek said his company aims to have an offshore system in place by 2025, though one will be deployed onshore in the northern Netherlands by 2023.

Though various aspects of energy storage via pressure are not new, the pairing of it with green energy sources carries significant potential.

"With wind and solar now becoming part of the grid – basically allowing us to get rid of fossil fuels – in that context, this is very exciting," said Claudio Canizares, an engineering professor and renewables expert at the University of Waterloo in Canada.