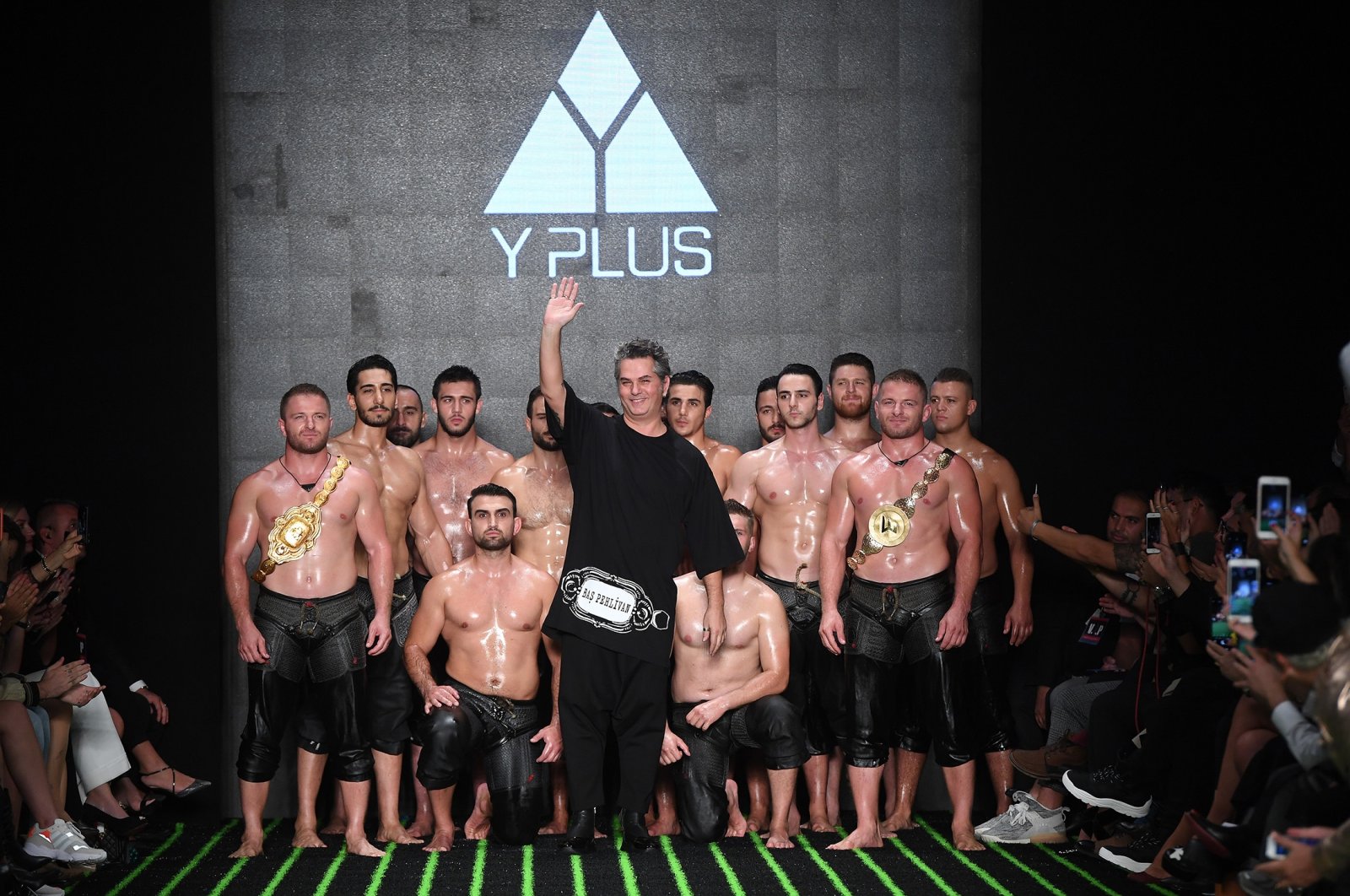 Designer Yakup Biçer (C) poses with Turkish wrestlers on the runway at the Y Plus By Yakup Bicer show during Mercedes-Benz Istanbul Fashion Week at Zorlu Performance Hall on October 9, 2019 in Istanbul, Turkey. (Getty Images for IHKIB)
by Yasemin Nicola Sakay Feb 17, 2021 2:35 pm

Fashion channels many muses. But sometimes, when everyday heroes from a designer's childhood, who happen to be the victors of Turkic lands, inspire the very essence of a collection, it sparks new ways of intercultural and universal communication

These are the three pillars of the Turkish national sport of oil wrestling, whose origins date back to as far as the 1360s. The wrestlers of this traditional sport engage in a demanding physical and mental struggle, wearing knee-length leather pants called "kispet" and covered in Turkey's famed olive oil, trying to tackle each other to the ground on grass fields to become the last man standing. The winner is bestowed the golden belt and the coveted title of "baş pehlivan" (chief wrestler).

Pehlivan, which means valiant, stalwart or hero in Turkish, became designer Yakup Biçer's inspiration for his autumn/winter collection last year. Having been in the business for over 30 years, working as a model, set designer and creative consultant for many brands, Biçer says he does not like to call his brand a fashion label but a style brand that feeds off of real-life experiences.

In fact, inspiration struck after Biçer read about and watched the biopic of "Koca Yusuf," which tells the story of legendary Ottoman wrestler Yusuf Ismail, born Yousouf Ishmaelo and posthumously remembered as Koca (Great) Yusuf after prolific writer Rıza Tevfik awarded him the honorific. The professional wrestler won countless competitions in Europe and the U.S. and was even nicknamed the "Terrible Turk" by his American opponents during the 1890s for his brute strength.

"I love history and researching, though not the kind taught at schools. I like reading about historical periods, biographical work and documentaries. So, one day I came across Koca Yusuf's story, and it was a tragic one," he said.

Yusuf was aboard star-crossed SS La Bourgogne when the steamliner departed New York for Le Havre in July 1898, and collided with another ship off Canada and sank, drowning 600 passengers including him.

"And then I started diving deeper into the tradition of oil wrestling, and specifically pehlivans. Pehlivan was actually a word, a concept that had been a part of our lives (as Turks) since we were young. Our elders would motivate and compliment us with words like pehlivan, saying we were as strong as them. Pehlivan was a hero in my childhood, or so this was the subliminal message," Biçer told me from across the screen. He was sitting in the corner of his living room with an antique-looking lampshade behind him to his right. The gold embossed regal picture frames hung on the wall containing what looked like historical portraits should've been a clue to his astute love of history.

"Then I began to ponder about how best I could turn this into a concept. I went to the Kırkpınar Wrestling Competition (in northwestern Edirne), spoke to the pehlivans there and checked out old photo archives. Considering that the Kırkpınar competition in the Turkish Thrace region is one of the oldest continuously running sports events, it was a great place to start.

The next thing he knew, he was sketching out designs and creating patterns, and thus was born the "Pehlivan" collection.

The collection, with the iconic character of "pehlivan" as its main source of inspiration, ran the risk of being either too folkloric or too modern that it lost its cultural essence. But Biçer managed to keep it right on the line, offering a balanced mix.

He achieved this by combining his modern aesthetic with oversize forms and creating an amalgamation of Far Eastern style and Turkish culture. He used embroidery on the bottoms and Kırkpınar-inspired prints on the shirts and T-shirts to preserve the ethnic element while combining it with edgy, timeless and unisex designs to carry it into the 21st century.

The dominant color of the collection was Biçer's favorite color, and the one he personally wears the most: black. He also incorporated an interpretation of camouflage on the parkas he created. The accessories he used, namely leather amulet necklaces and triangle-shaped pouches and bags as well as the shoes reminiscent of hand-sewn traditional Ottoman slip-ons "çarık" and "mest," also complemented the theme of the collection.

Biçer said it is hard to describe the feelings he had when he showcased this collection at London Fashion Week in February 2020. "I felt such pride, excitement and joy," especially because he got to share with the world a part of the Turkish cultural legacy.

Being a Turk is not a hindrance in the fashion world, according to Biçer. "If you use a universal language in your collections, then the world welcomes you with open arms," he said.

The Turkish designer says he plans on revisiting the "pehlivan" theme in his future collections as well.

"If you look at luxury fashion houses, that's what they are doing. There is a cohesiveness; they are telling a story and sending messages between past, present and future collections. You shouldn't be wasting a beautiful concept on one collection; that's why I continued to incorporate elements from my 'Pehlivan' collection at Mercedes-Benz Digital Fashion Week Istanbul, though this time through a different perspective," he said.

Biçer's Spring/Summer 2021 collection, for which the inspiration was modern urban warrior, incorporated baggy shalwar-like bottoms, bandanas and amulet-shaped bags. With the combination of strong, clear-cut silhouettes and combat boots, pehlivan-inspired patterns and parachute-fabrics reinterpreted as contemporary shields, the thematic cohesiveness is apparent.

I noticed that many of the items he has designed are rather androgynous and asked him why he chose to go in that direction.

"When I discovered my own style in the early 2000s, I was in search of black items, oversize cuts, loose fits and timeless and genderless designs. I had trouble finding these on the market, so in a way, my brand was borne out my own needs," he said.

"And when you look at the past, we used to dress very genderless. Men used to wear long gowns and skirt-like garments," stressed Biçer. And he's right; outside of western cultures, especially in Middle Eastern or Asian countries, you can see men wearing skirts from the Sumerian Kingdom in Mesopotamia to the Tibetan monks. It wasn't until the 16th century that this fashion item gained a gender distinction.

The same goes for high heels. Heeled shoes in the modern sense came to Europe via Shah Abbas the Great of Persia in the early 17th century, which were then worn to show status.

"I wanted to create clothes that any gender of any age could wear from day till night, comfortably. I wanted to channel a style that was minimal, straight-cut and innovative," he explains. That's also how he described the wearers of his Y Plus brand: gender-neutral, androgynous and "a 21st-century human."

That's why the Y Plus brand remained relatively unfazed by the COVID-19 pandemic. As a new brand that made its international debut in 2020, Y Plus did have to deal with canceled orders and halted production which pushed progress back a few steps. But the brand aesthetic was quite in line with what people have been seeking over the past year in lockdown – comfy, oversize, cool.

"Our sense of fashion had been evolving over the past few years anyway even before the pandemic. With sustainability in the spotlight, more and more people had been turning to timeless and gender-neutral designs. Our brand had already embodied those principles. By creating such designs and using recycled fabrics and organic fibers, we were already headed in that direction as Y Plus; we had it in our DNA," he said.

But Biçer added: "People tend to interpret being gender-neutral as being more feminine, but that is not the case (with Y Plus), it's more androgynous. I do favor minimalism but also love avantgarde shapes as well."

So is that where the Far Eastern influence comes from? The lack of gender-distinction is one reason, he said, but Biçer also has a personal and cultural fascination.

"I always had an interest in all things Far East. I closely follow the fashion; the streetwear, the big prints; the forms ... I admire their stance in life, their culture and especially the respect they have for one another, the Japanese, in particular," he explained.

He says he used to watch a lot of "Samurai" and "Shogun" when he was young, so perhaps that's where it all started.

"I'm currently reading about Geisha culture," he said, adding that when you look at their imprints and the structure of their culture, it's impossible not to be mesmerized. "Then you get thinking about ways to interpret this."

And isn't that what fashion is? Nothing created nowadays is a first, unattempted or undone before, Biçer said, adding: "Each designer interprets their chosen concept from a modern point of view."

In a way, Biçer said, you also get to create your own heroes through your designs.

"Pehlivans were secret superheroes for us. But not the kind you see on TV or the fictional kind. They were the living, breathing kind you can touch," he said.

And that's where he is headed now. I pressed him to give me hints about what is in the works but he said, laughing mischievously, that he'd only give me one clue.

"I am thinking of doing something that derives from our everyday heroes, the heroes of today. We have many superheroes in arts, science, every field. We have heroes that come from our own (cultural) roots."