A journey to the past: Iftar from first printed Turkish cookbook 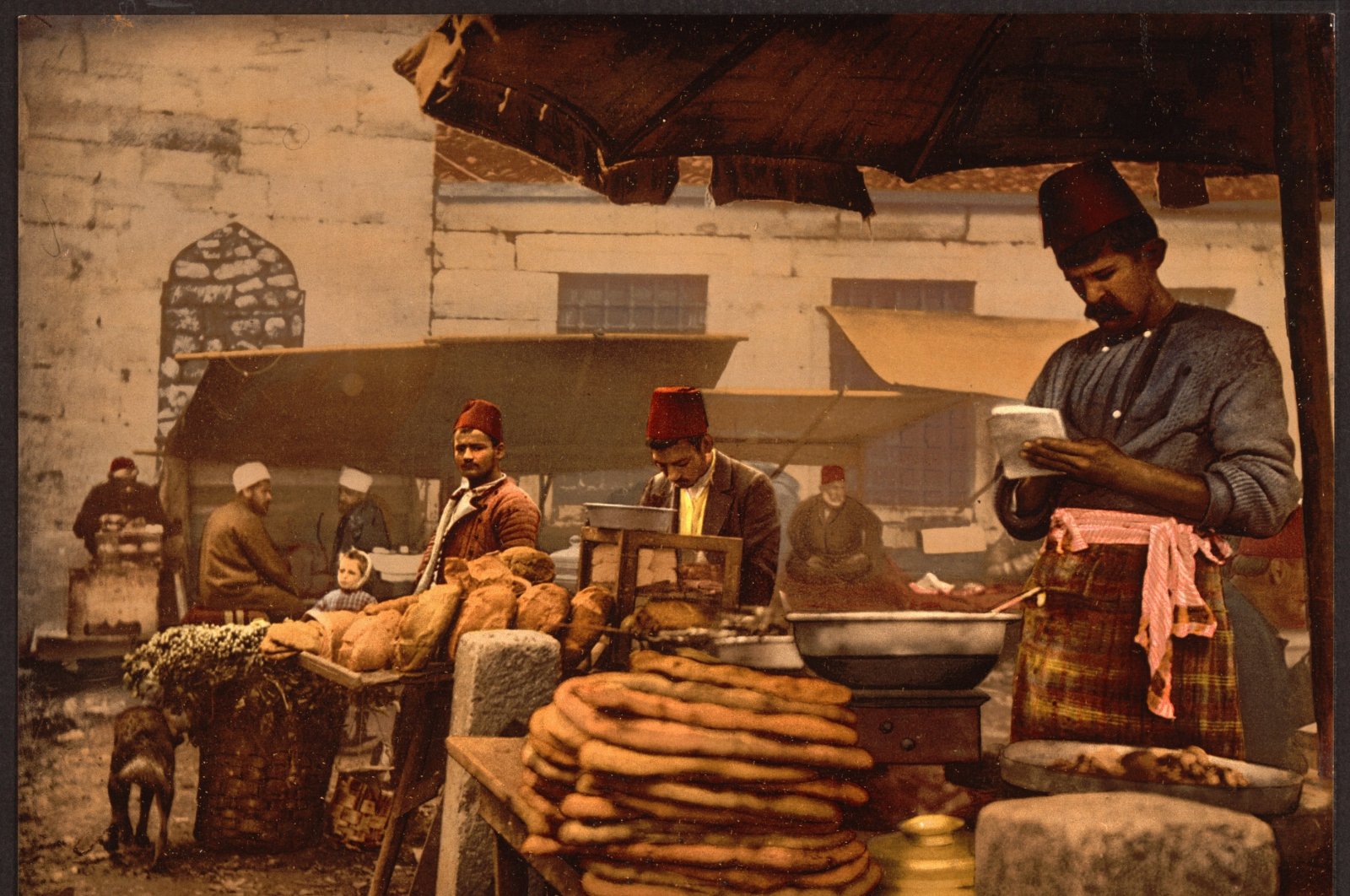 "Cook in the rue de Stamboul", a painting depicting the streets of Istanbul, circa 1890-1900, Istanbul, retrieved from the Library of Congress. (via WIKIMEDIA COMMONS)
by Ayla Coşkun Apr 25, 2021 12:40 pm
Edited By Yasemin Nicola Sakay

When inspiration runs dry during Ramadan for what to cook, turn to history and try this Ottoman iftar that was worthy of filling royal bellies at Topkapı Palace hundreds of years ago

Turkish cuisine owes its richness to the connection that bridges the East to the West. Over hundreds of years, it was influenced by many food cultures thanks to its multicultural fabric and it also returned the favor, influencing the kitchens of the world. The most striking time for culinary advancement for the Turks, however, was the roughly 500 years when the Ottoman Empire came into existence.

Historical archives still have an authentic kitchen notebook from the 15th century from the regal kitchens of Topkapı Palace but sadly, while all the ingredients were noted, the techniques and "how" certain recipes were made were lost over the centuries. While reading through culinary literature, I stumbled upon a real gem: the first-ever printed Turkish cookbook, “Melceü’t-Tabbahin” by Mehmet Kamil, which literally means “Chefs' Haven.” First published in 1844, the title is not much different from cookbooks nowadays. It lists soups, desserts and different techniques of preparing dishes in different categories but since it was written in Ottoman Turkish (a unique combination of Turkish, Persian and Arabic) I couldn’t read it, let alone understand it. But thanks to the work of historians, there are a few translations and detailed explanations that make it understandable for the modern Turkish speaker. If you are fluent in Turkish, here is a version published by Turkey’s Institute of Manuscripts. But getting a printed version was a pain, which is very sad considering that this is the very first cookbook that was printed on the subject matter and should be a staple in every major bookstore in the country – but I digress.

So, here I have selected a few of those treasured recipes, including a few true classics that have changed quite a bit over time, and some virtually not at all.

A note before we begin: During those times, it was fairly uncommon to give measurements or even a list of ingredients per se. So this week will be a bit different than our usual format. Trust in your culinary expertise and senses and give these a try!

While chickpeas are featured in many recipes, especially soups, I was glad to have found this one here because it was surely the star of the show. I have to note that I love the little commentary the writer added to these recipes, such as this one: “Made out of chickpeas. It is pretty good and abundantly nutritious.”

While the recipe ends here, the writer says that there is an alternative way of making it, but it would be one that would be time-consuming. He says that after peeling the chickpeas they can be dried and crushed with a pestle and mortar. After sifting, they then can be cooked with the broth.

While looking through the book to pick and choose an interesting iftar, this recipe caught my eye. I was surprised to see it here as I believed that this type of köfte was a rather new invention, considering its history. In past weeks, we shared the recipe in a piece about iconic Turkish meatballs, but I wanted to revisit it here as it turns out that it is wildly different from the modern way of making it.

Take enough meat and mince it thoroughly. Chop some onions and add them to the meat. Then, add a portion of raw rice, salt and pepper and knead it all together. Form your köftes or meatballs into elongated shapes. Put them into boiling water and let them boil, removing them when you are sure they have been cooked through. Once they have cooled off, whisk some eggs and fry them on high heat.

The author notes at the end that it was a quite popular dish at the time, and again, I don’t know why I find these little notes endearing.

Considering the wide variety of börek in Turkish cuisine, it was no surprise to see a dedicated section in the cookbook. All of them were interesting, but I was particularly intrigued by the onion version because it was something that I have, quite frankly, never heard of. A shame that it is not a common dish anymore, despite its simplicity.

Cut three to five onions finely and boil them for a few minutes in salted water. Remove the onions from the water and after letting them drip dry, sautee them with 1 to 2 tablespoons of fat or oil until the water of the onions has evaporated. After they are cooked, gradually add a few eggs by whisking them into the onions. Cook this mix for a bit, layer it onto a sheet of yufka (phyllo) and place another sheet on top. Bake this by drizzling some oil or fat over it in the oven or over the fire.

The Ottomans loved eggplants. And I mean absolutely adored them! They had an almost proverbial 51 different ways of preparing them, and can you blame them? When prepared right, they taste heavenly. We did talk about the meaty brother of imam bayıldı, karnıyarık before and touched upon how to make smoked eggplants. This one is surprisingly vegan but heavy-handed with the olive oil.

Why did I choose this one of all the eggplant recipes listed, you may ask. Because it has a nice legend attached to it. An elderly imam marries the daughter of an olive oil merchant who was given 12 casks of the best oil as a gift. The newlywed wife made a delectable eggplant dish with the oil, and the imam would ask her to cook it every day. But on the 13th day, there were no eggplants on the table. The imam asked his wife why she didn’t make it. She said that she used up all the olive oil, making the imam faint in disbelief. It is said that the dish got its name from this very story as “imam bayıldı” literally means “the imam fainted,” though “fainting” here can mean “swoon” as well. Either way, it is quite simple but delicious.

Take as many eggplants as you like and cut them lengthwise into four without removing the stems. Let them rest in salted water for a while to get rid of the bitterness. Cut onions roughly and sautee them in copious amounts of olive oil. Put half of the onions into a pot and put the eggplants on top of them. Put the remaining onions onto the eggplants and cook it all with enough water. If desired, you can add a few cloves of garlic. Once it has cooled off, serve.

The author's note says this tastes equally great when made with zucchinis, which are incidentally the second-most loved vegetable in Ottoman kitchens.

An iftar without dessert seems wrong, and while there are many desserts to choose from, I wanted to play it safe and give some measurements unlike the other four. "Kurabiye" means cookie in Turkish. While there are many different cookie recipes listed, this one is just plainly called "kurabiye," probably making it the most basic kind there is.

Take 1.3 kilograms (2.86 pounds) of honey and mix it with half a tea glass of water (roughly 50 milliliters) and cook together. Remove the foam and add 1.3 kilograms of melted, clarified butter (also known as ghee) to the mix. Add as much flour as it can take, as the Turks say, and knead it well.

Once it has been kneaded, take bits of the dough in the desired size, form into balls and place them on a greased baking tin. Bake until golden brown.

If you want to have the cookies to be a palish shade, bake them with paper covering them. If you want to use sugar instead of honey, you should crush the sugar until it is fine and then combine it with the clarified butter, and then knead it.