Köfte, the iconic Turkish meatball and its many variations 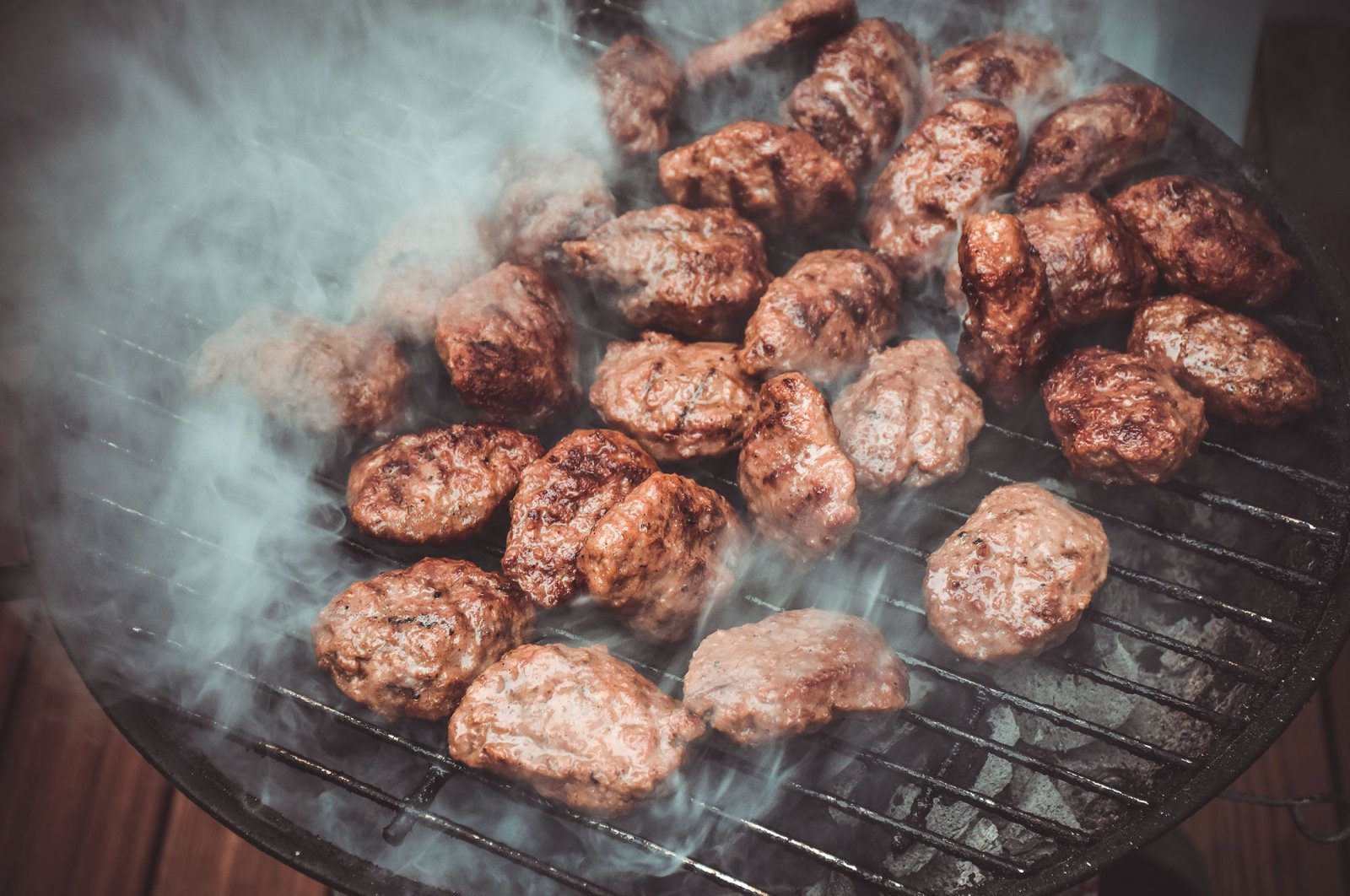 Turks love a good old meaty dish and the very first foods that come to mind when talking about Turkish cuisine are most likely to be of the carnivorous kind, namely döner or any kind of kebab. But köfte is more widely consumed than them by a landslide, and there are many regional variations that date back centuries. Although, technically köftes are "meatballs," Turkish köftes aren't solely made of red or white meat. In fact, in Ottoman times, the classic zucchini fritter "mücver" would be listed alongside lamb meat patties in the Topkapı Palace kitchen's notebooks. It was more about “how” these were prepared rather than the ingredient itself.

With that small culinary history lesson aside, I'll be focusing on the meatier versions of köfte you may find while at a Turkish market or restaurant. This is not a complete list by any means as there are dozens of köfte types across Turkey but the ones listed below are some of the more popular choices. One I did think of that is meat-based but did not feel comfortable sharing the recipe for is the çiğ köfte. Literally meaning “raw köfte,” this dish is made with raw meat, spices and bulgur and involves a lot of kneading. The ones you can find basically everywhere nowadays are meat-free thanks to regulations forbidding the commercial preparation of this köfte.

This title itself will cause quite a ruckus for sure, as the köfte I am referring to here is the one classic homemade kind, or is/was made by your mother, grandmother, aunt or anybody else around the house. Like with many recipes, each family has its own recipe, so I'll share with you our take. To be honest, I usually make it with “göz kararı” and forgo the exact measurements. And another interesting tidbit: Swedish meatballs are based on a Turkish recipe, at least that is what Sweden's official Twitter account said.

Either grate or chop your onion finely and add all the other ingredients into a bowl. Knead it all together. Here it is key to continue kneading until it forms a consistent dough-ish mash. The longer you knead the better basically! I often add a bit more cumin than usual (1/2 teaspoon is what I like to add here in general) to counter the gassy nature of the onion. If the mass is not shaping up at all you might want to add a bit more breadcrumbs and continue kneading. Form the köfte to the shape you like and either fry them in a pan with a bit of vegetable oil or bake them in the oven until no longer raw. Barbecuing them is of course another very tasty way to prepare them.

If translated literally, this dish sounds rather sexist, meaning “woman’s thigh köfte,” and it is said to have gotten this name because of how it looks. Over the years, some have gotten offended by the name, opting to use "rice köfte" instead. Turkish cuisine is full of interesting naming choices without a doubt! This is considered a classic in Thrace but can be found in many menus across Turkey. It is a great recipe to make good use of leftover rice.

Chop the onion and garlic very finely and roast them with the 2 tablespoons of oil until they have softened and started to get aromatic. Add half of the beef to this and continue sauteing it until the meat has changed color and any liquids have evaporated. Add the seasoning and let it cool off.

Add the raw meat, egg and rice to the cooked meat and knead it until it can take shape. Add more seasoning if required. Shape elongated patties and whisk the two eggs in a wide-ish bowl and put the flour into a plate. Dunk the patties first in the flour then into the eggs and fry them on a wide pan with generous amounts of oil on both sides. Once fried, place them on a paper towel to get rid of the excess oil. Serve warm.

A specialty coming from the western province Izmir and to be perfectly precise from the district Tire, where it got its name. This köfte is cooked on a skewer and served with a delectable tomato sauce!

Add a teaspoon of salt and pepper to the meat and knead it thoroughly (a stand mixer can do this job for you if you have one) and let the meat rest in the fridge for at least an hour.

Peel the tomatoes, then chop them finely or grate them. Put the olive oil in a pan and saute the tomato paste until the smell gets more aromatic. Add the chopped or grated tomatoes and add seasoning to your liking. Let this simmer until it is the consistency of a thick sauce.

Take the meat out of the fridge and wrap it around wooden skewers and bake them at 200 degrees Celsius (390 degrees Fahrenheit) for 20 minutes. Cut the pita bread into small cubes and lay them on a plate you plan to serve the köfte with. Dose the bread with the prepared sauce and carefully place the köfte onto the saucy bread by removing the skewer.

Still staying in the west, now it is the province Bursa that is renowned for this dish. Again it is named after its namesake district (yeah, that is kind of the pattern here). It has, like the tire köftesi, at least a century of history and has the motto less is more – meaning that the köfte itself requires minimum seasoning. The chefs of this meaty dish even say that if the meat is good, there is absolutely no need to resort to seasonings at all, except salt that is. Apparently they were throwing some shade at other chefs and cooks out there, but whatever the reason now we have this delectable meat dish to present to you here.

Grate onions and add all the ingredients into a bowl. Knead them all together for several minutes and let it rest in the fridge for at least three hours. Remove from the fridge and shape them in stripes the thickness and length of fingers. Fry in a pan with a bit of oil, bake or barbecue to your liking.

Now we are heading to the Black Sea region in eastern Trabzon province. While the Black Sea is known for its fish dishes and other delectable regional meals, this köfte is famous in its own right. The key here is the mix of the different kinds of meat. The recipes that can be found online change a lot, some adding more fat from the lamb into the mix, some adding leaner meat from the cow. This seems to be the middle ground of them all.

Chop the garlic as finely as possible and mix all the ingredients in a bowl. If possible, have the meat minced together. If that is not a possibility, just knead it all together for a bit longer so that it is properly distributed. Let the mix rest in the fridge for about 30 minutes and form it into flat patties about the size of an egg. Like with the other köfte, you can fry them in a pan, bake or barbecue them. Usually, these are served with barbecued peppers and tomatoes.

I did mention before that there are many more that are unique in their own way. So if you are interested I’m going to list a few:

Tekirdağ köftesi: Named after the western province, it is special because the meat, bread and onions are run through a meat grinder several times. It is then seasoned with pepper, salt and cumin and let to rest for at least a night.

Izmir köftesi: Another one from the same-named western province but with the difference that these are not köfte on their own. It is a saucy dish, called “sulu yemek” in Turkish, literally meaning “dish with water.” The köfte and potatoes are precooked and then baked together with other veggies.

Cızbız köfte: A different name for the classic köfte mentioned above.

Içli köfte: A very artful köfte in the shell of thinly stretched bulgur native to the southeastern region of Turkey.

Sucuk köfte: The classic sucuk sausage in the form of köfte.

Ekşili köfte: Literally means "sour meatballs" and is a soup usually served at weddings in the Thrace region of Turkey featuring tiny balls of köfte. Check out the recipe for that here.