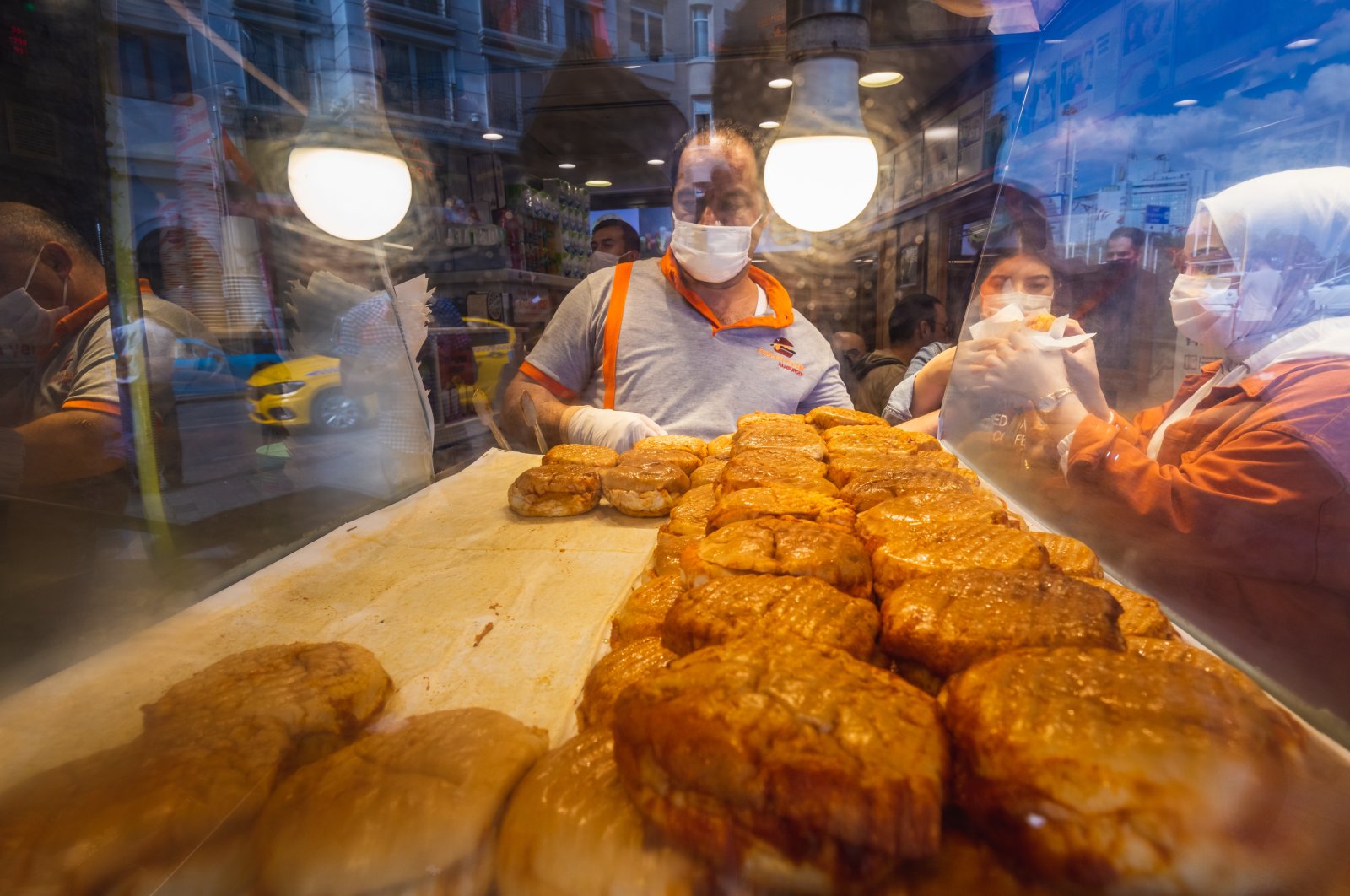 Wet burger, waffles and stuffed mussels: If you are planning to cheat on your diet at midnight in Turkey, here are some options to choose from

As summer hits full swing and Turkey begins to open up again as per the normalization process in contending with the pandemic, life is returning to normal. We can now enjoy the summer routine of sand and sea, go for a leisurely evening stroll and feast to our heart’s delight, which, thankfully, we can now do until midnight. Turkey has a wide variety of crave-worthy late-night foods and snacks that must be tried by expats or visiting foreigners. The after-dinner food scene on the streets is buzzing, making for an exciting and satisfying adventure.

The following is a list of the top 10 late-night snacks available in Turkey:

The Turks love their offal as any visitor will soon realize when they witness the wide variety on offer in Turkey, but their favorite variety has to be “kokoreç,” which is a sandwich of chopped-up rotisserie meat consisting of lamb innards wrapped in intestines. This popular late-night snack is sold at stands, where you can watch it being prepared, referred to as “kokoreççi.”

Offal makes another appearance in the form of a popular after-hours soup “kelle paça,” which literally means a stew made with lamb head and trotters. The soup can come with the skull intact and taking center stage as you sip the broth surrounding it and nip into the finer pieces of meat. There are soup restaurants referred to as “çorbacı” in pretty much every town in Turkey that specialize in this particular soup. However, don’t fret if you are intimidated, as most soup venues also serve a lentil soup for the fainter-hearted.

It could easily be argued that the Turks created the original slider and it came in the form of the "ıslak burger,” which literally translates into “wet burger.” The Turkish version of sloppy joes is simply a smaller-sized patty and bun that is ever-so-lightly doused in a garlic and tomato sauce. This snack first gained its fame at the döner shops lining Taksim Square but has now become a staple in most döner and wrap shops.

While a wrap filled with thin slices of roasted meat, aka döner, is another popular late-night meal, it can be elusive to find at later hours. However, in Turkey, there are restaurants devoted to a whole other variety of wraps, referred to in Turkish as “dürüm.” In fact, some of the first food trucks to ever exist sell late-night durums. The dürüm varieties on offer span from shish kebab lamb or chicken referred to as “çöp şiş” or “tantuni,” which is a specialty from Mersin. Tantuni is made by boiling and then sauteeing julienned meat with tomatoes and peppers in cottonseed oil and is wrapped up in a thin tortilla-like flatbread referred to as lavash.

The art of the Turkish baked potato

While up until now all of Turkey’s late-night snacks listed have seemed heavily meat-oriented, don’t fret as there is another lavish vegetarian option available by way of Turkey’s outlandish baked potato. Sold at colorful and quaint “kumpir” stands, these huge baked potatoes are sliced in half and then the insides are scooped out and doused in a mixture of butter and kaşar cheese, which serves as the base for a plethora of toppings. From an herb yogurt to a spicy pepper spread, olives, corn, pickles, purple cabbage, mayonnaise, ketchup and the list goes on. Believe it or not, you can even have a dollop of potato salad on your baked potato!

Fill up on stuffed mussels

A very special treat is finding a “midyeci,” which is usually a stand that solely makes stuffed mussels (midye in Turkish). This popular street food consists of painfully separated and cleaned shells stuffed with mussels in a bed of currant-spiced rice.

You can spot these vendors from the crowds surrounding them as they peddle their roasted and shredded chicken, rice and chickpeas from ornate see-through stands served up on plates to go. Satiating and straightforward, this dish is also the simplest of comfort foods you will ever find in Turkey.

A newer addition to the late-night snack routine is the appearance of waffle stands doubling as ice cream shops. Waffles are made on the spot and a glistening case displays a vast array of sweet toppings, ranging from fruits and nuts to all forms and colors of chocolate. You can even have a scoop of ice cream loaded on top of your waffle if you want!

The king of “tost”

When Turks say the word “tost,” it may sound like they are referring to a piece of toasted bread; however, they are in fact referencing what could best be described as a “grilled cheese sandwich.” Yet in Turkey, the “grilled cheese sandwich” has been elaborated on, gaining quite the legacy, with a number of variations dedicated to different regions in the country. There is the “ayvalık tost,” which is served on a signature rectangular slice of bread and is loaded up with julienned sausage and salami, melted cheese, pickles, tomatoes and potato salad. Another favorite is the “kumru,” a type of grilled sandwich particular to Izmir, which includes julienned salami and sausage, tomatoes, pickles and Izmir’s famous tulum cheese and is prepared on an elongated sesame bun. The timeless classic “karışık tost” is simply the perfect marriage of slices of the spiced Turkish sausage sucuk with kaşar cheese on two square slices of white bread and is available wherever “tost” is found. There are also grilled sandwiches with more exotic ingredients such as slices of tongue or kavurma, a Turkish preserved meat, both of which are coupled with kaşar. All “tostçu” cafes will also have plain grilled cheese sandwiches and many have other vegetarian options as well as a “patso,” which is a sandwich bun filled with french fries. They also happen to whip up a number of healthy smoothies for a lighter way to end the night.

End it all with an “atom” bomb

Luckily, if you are looking for a healthier way to satisfy a late-night craving, Turkey’s “Tostçu” shops tend to always have a long list of fresh fruit juice varieties you can mix together to create the perfect smoothie. An “atom” is a fruit juice blend of all of the different fruits on hand, but mainly grapefruit, orange, apple, pomegranate and kiwi juice with a banana. Another classic milkshake that is available at said shops is “Muzlu Süt,” which is a banana milkshake with honey. Available pretty much everywhere is of course the national drink “ayran,” a salted-yogurt beverage, which is also a surprisingly refreshing and healthy way to cap off the night.