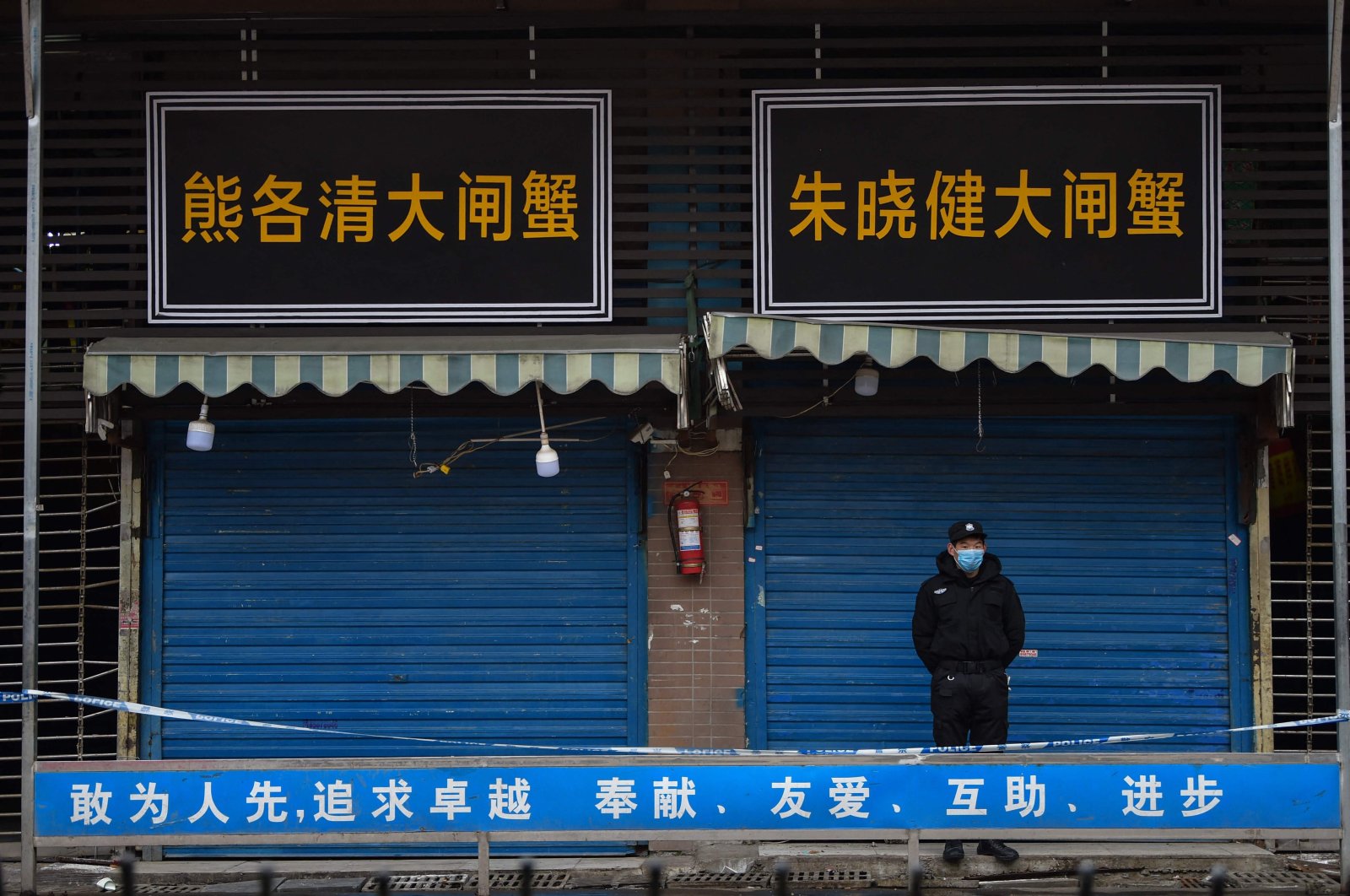 A security guard stands outside the Huanan Seafood Wholesale Market where the coronavirus was detected in Wuhan, China, Jan. 24, 2020. (Photo by Hector RETAMAL / AFP)
by Agencies
Mar 30, 2021 7:44 pm

The World Health Organization (WHO) needs to further investigate whether the coronavirus outbreak originated with a leak from a lab, Director-General Tedros Adhanom Ghebreyesus urged on Tuesday.

A report by WHO and Chinese experts, obtained by Agence French-Presse (AFP) ahead of its Tuesday publication, had judged the lab-leak hypothesis highly unlikely, saying the virus behind COVID-19 had probably jumped from bats to humans via an intermediary animal.

He added that the international team had difficulty accessing raw data during the mission to China, demanding "more timely and comprehensive data sharing" in the future.

The expert report on the origins of COVID-19 has had a troubled birth, with publication delays adding to the hold-ups and diplomatic wrangling that plagued the WHO's attempts to get experts into Wuhan – the city at the center of the initial outbreak.

They finally arrived on January 14, more than a year after the first cases surfaced.

Experts believe the SARS-CoV-2 virus that causes the COVID-19 originally came from bats.

The report authors judged that the most likely scenario was that animals were the source of the coronavirus and that it made a direct leap to humans, while not ruling out other COVID-19 origin theories.

Beijing's theory that the virus did not originate in China at all but was imported in frozen food was judged "possible" but very unlikely.

The WHO report is a "helpful first step" but more work is needed to understand how it started and how it jumped to humans, the European Union said Tuesday.

"While regretting the late start of the study, the delayed deployment of the experts and the limited availability of early samples and related data, we consider the work carried out to date and the report released today as a helpful first step," the EU said in a statement. The 27 European Union member states highlighted "the need for further work to study the origins of the virus and its route of introduction to the human population."

Without naming China – the country where the coronavirus was first detected – the statement called on "all relevant authorities" to help with the next stages of the probe, so that "any gaps in data needed to further the investigation can be addressed."

Although the team concluded that a leak from a Wuhan laboratory was the least likely hypothesis for the virus that causes COVID-19, Tedros said the issue required further investigation, potentially with more missions to China.

"I do not believe that this assessment was extensive enough," he told member states in remarks released by the WHO. "Further data and studies will be needed to reach more robust conclusions."

The WHO team's leader, Peter Ben Embarek, told a press briefing it was "perfectly possible" the virus had been circulating in November or October 2019 around Wuhan, and so potentially spreading abroad earlier than documented so far.

This was opposite his statement when the team found no COVID-19 origin answers in China and Ben Embarek supported the position of Liang Wannian, head of the Chinese contingent, that there was "no indication" the sickness was circulating in Wuhan before December 2019 when the first official cases were recorded.

"We got access to quite a lot of data in many different areas, but of course there were areas where we had difficulties getting down to the raw data and there are many good reasons for that," he said, citing privacy laws and other restrictions.

He said the team had felt political pressure, including from outside China, but that he had never been pressed to remove anything from its final report.

Dominic Dwyer, an Australian expert on the mission, said he was satisfied there was "no obvious evidence" of a problem at the Wuhan Institute of Virology.

The European Union renewed criticisms that the origin study had begun too late, that experts had been kept out of China for too long and that access to data and early samples had fallen short.

In a statement, Walter Stevens, EU ambassador to the United Nations in Geneva, called for further study with "timely access to relevant locations and to all relevant human, animal and environmental data available."