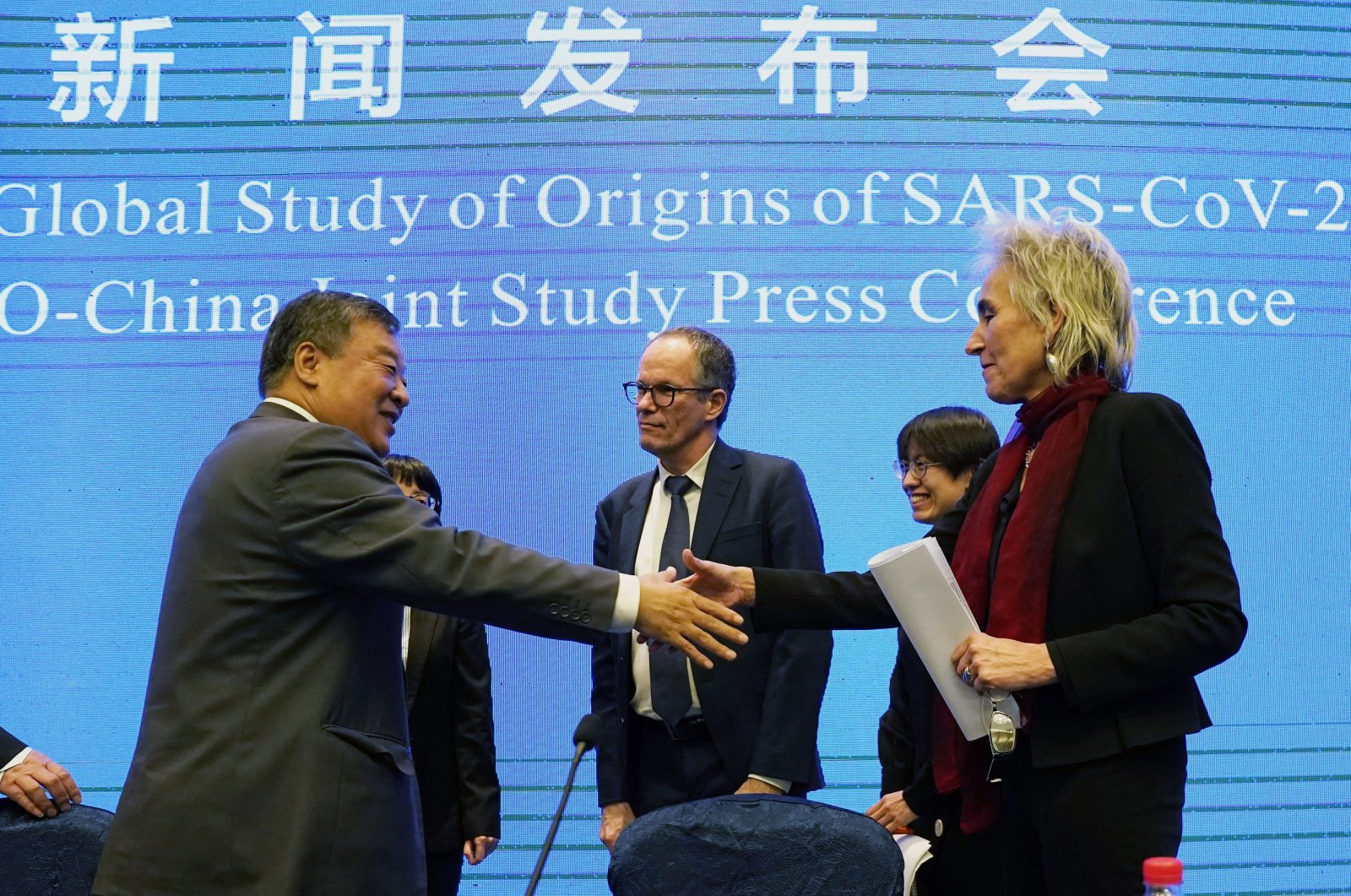 Marion Koopmans (R) and Peter Ben Embarek (C) of the World Health Organization team say farewell to their Chinese counterpart Liang Wannian after a WHO-China Joint Study Press Conference at the end of the WHO mission in Wuhan, China, Feb. 9, 2021. (AP Photo)
by Agencies Mar 29, 2021 9:17 am

In a report released on Monday an international expert mission to Wuhan concluded that COVID-19 was probably first transmitted to humans from a bat through an intermediary animal, while Europe grapples with latest wave of coronavirus

A joint WHO-China study on the origins of COVID-19 says the transmission of the virus from bats to humans through another animal is the most likely scenario and that a lab leak is "extremely unlikely,” according to a draft copy obtained by The Associated Press (AP).

The findings were largely as expected and left many questions unanswered. The team proposed further research in every area except the lab leak hypothesis. The report’s release has been repeatedly delayed, raising questions about whether the Chinese side was trying to skew the conclusions to prevent blame for the pandemic falling on China. A World Health Organization official said late last week that he expected it would be ready for release "in the next few days.”

The AP received what appeared to be a near-final version on Monday from a Geneva-based diplomat from a WHO-member country. It wasn’t clear whether the report might still be changed prior to its release. The diplomat did not want to be identified because they were not authorized to release it ahead of publication. The researchers listed four scenarios in order of likelihood for the emergence of the virus named SARS-CoV-2. Topping the list was transmission through a second animal, which they said was likely to very likely.

They evaluated direct spread from bats to humans as likely, and said that spread through "cold-chain” food products was possible but not likely. The closest relative of the virus that causes COVID-19 has been found in bats, which are known to carry coronaviruses. However, the report says that "the evolutionary distance between these bat viruses and SARS-CoV-2 is estimated to be several decades, suggesting a missing link.”

It said that highly similar viruses have been found in pangolins, but also noted that mink and cats are susceptible to the COVID virus, which suggests they could be carriers.

The report is based largely on a visit by a WHO team of international experts to Wuhan, the Chinese city where COVID-19 was first detected, from mid-January to mid-February. Peter Ben Embarek, the WHO expert who led the Wuhan mission, said Friday the report had been finalized and was being fact-checked and translated.

"I expect that in the next few days, that whole process will be completed and we will be able to release it publicly,” he said.

The draft report is inconclusive on whether the outbreak started at a Wuhan seafood market that had one of the earliest clusters of cases in December 2019. The discovery of other cases before the Huanan market outbreak suggests it may have started elsewhere. But the report notes there could have been milder cases that went undetected and that could be a link between the market and earlier cases.

"No firm conclusion therefore about the role of the Huanan market in the origin of the outbreak, or how the infection was introduced into the market, can currently be drawn,” the report says.

As the pandemic spread globally, China found samples of the virus on the packaging of frozen food coming into the country and, in some cases, have tracked localized outbreaks to them. The report said that the cold chain, as it is known, can be a driver of long-distance virus spread but was skeptical it could have triggered the outbreak.

The report says the risk is lower than through human-to-human respiratory infection, and most experts agree.

"While there is some evidence for possible reintroduction of SARS-CoV-2 through handling of imported contaminated frozen products in China since the initial pandemic wave, this would be extraordinary in 2019 where the virus was not widely circulating,” the study said.

The report comes as dramatic infection spikes in Europe have forced a tightening of unpopular restrictions across the continent, with Germany and France among countries contending with a third wave of infections and hospitalizations.

German Chancellor Angela Merkel has blamed her country's difficulties during the coronavirus pandemic – from the slow vaccine rollout to the back-and-forth over lockdown rules – partly on "a tendency toward perfectionism” and called for greater flexibility to tackle the latest surge in cases.

In an hour-long television interview with public broadcaster ARD late Sunday, Merkel acknowledged that mistakes were made by her government, including on plans for an Easter lockdown, which had to be reversed.

The long-time leader also expressed frustration over the actions of some of Germany's state governors, including members of her own party, who have resisted tougher restrictions they had previously agreed to. Germany's disease control agency on Monday reported 9,872 newly confirmed cases in the past day, and 43 deaths. Since the start of the outbreak, the country of 83 million has recorded almost 2.8 million confirmed cases of COVID-19 and 75,913 deaths

In France Finance Minister Bruno Le Maire said on Monday that health conditions were worsening during a third wave of the pandemic in France and "all options are on the table" to protect the public. Le Maire also told France Info radio that the country should avoid adopting stricter restriction measures for as long as it could, and ruled out changing the list of shops and businesses that have been allowed to stay open.

"This list will not change," Le Maire said, according to remarks carried by Reuters. "Today sending the signal that we would reopen some businesses while the situation deteriorates, it's not in the country's interest."

Under COVID-19 restrictions in place in 19 high-risk zones, including Paris, stores allowed to stay open include those selling food, books, flowers and chocolate, and hairdressers. Clothes, furniture and beauty shops are not allowed to open. This has led to frustration among the so-called non-essential shop owners forced to stay closed.

President Emmanuel Macron last week defended his decision not to impose a third full lockdown and to keep schools open, but said further restrictions would probably be needed.

The number of patients in intensive care in France is fast approaching the worst point of the country's last coronavirus surge in the autumn of 2020, another indicator of how a renewed crush of infections is bearing down on French hospitals.

The French government count of COVID-19 patients in intensive care units (ICUs) and hospital surveillance units climbed to 4,872 on Sunday night. That is just short of the last high-point of 4,919 ICU cases on Nov. 16, when France was also gripped by a virus surge and was locked down in response. With ICU admissions continuing to increase by double digits on a daily basis, that November peak could be overtaken within days. Doctors are increasingly sounding the alarm that they may have to start turning patients away for ICU care, particularly in the Paris region.

In sharp contrast, people in England were set for what newspapers dubbed "Happy Monday," with stay-at-home orders relaxed as rapid vaccinations appeared to drive down infection rates there. From Monday people were allowed to meet up outside in groups of six for the first time in nearly three months, though Prime Minister Boris Johnson urged caution due to rising cases in Europe.

Johnson announced a third national lockdown in England on Jan. 4, but has said he plans to proceed with a "cautious and irreversible" route out of restrictions, underpinned by a quick roll-out of vaccines.

"It's vital that we don't overdo it and risk all the progress we've made," Johnson said, in a nod to Britain's much-reduced coronavirus infection, hospitalization and death rates compared to earlier this year. "Please follow the new rules carefully so that we can gradually get back to normal together."

In the third phase of reopening from April 12, the government plans to allow outdoor drinking in pub gardens, while hairdressers and non-essential retail will open in England. Limited indoor mixing in hospitality premises will be allowed from mid-May, while many other remaining restrictions will be lifted on June 21, if the outlook remains positive.

With more than 126,000 deaths, Britain has one of the world's worst mortality rates from the pandemic. But the level of new infections has been falling since early January and is now averaging around 5,000 cases a day.

Meanwhile, on Sunday the country passed the milestone of inoculating more than 30 million adults with a first coronavirus vaccine dose. Britain has so far been using two jabs, developed by Oxford University-AstraZeneca and BioNTech-Pfizer.

The first batch of 17 million doses of U.S. company Moderna's vaccine is set to be delivered next month, easing concerns about an imminent shortfall in supplies. The government has insisted it is on course to hit its target of offering a first jab to all adults by the end of July, and that follow-up second doses are also on target.

While conceding that continental Europe's latest wave of COVID-19 could hit Britain within weeks, Johnson said at the weekend that the "key difference" was the country's vaccination drive.

"And as things stand, I can see absolutely nothing in the data to dissuade me from continuing along our roadmap to freedom," he added. Johnson, whose own hair has grown increasingly unruly, said he was looking forward to going to the barbers, and to a pint of beer.