Homecoming set for Turkish artifacts smuggled to US 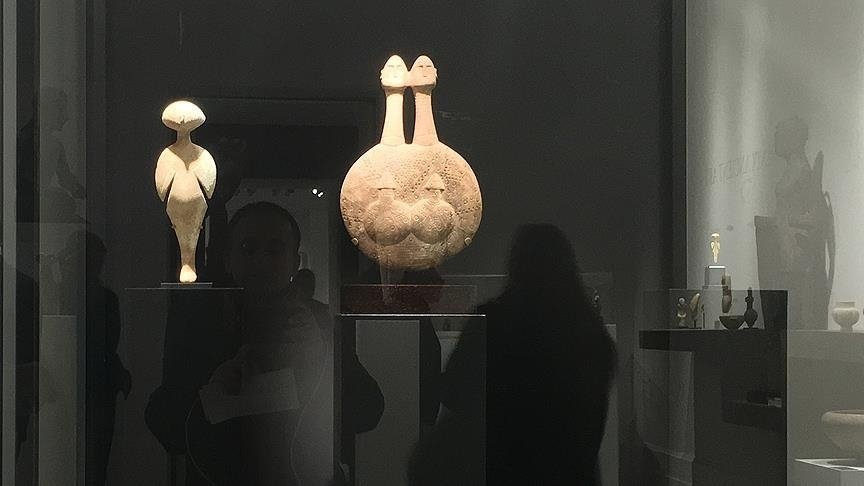 Turkey's fight to repatriate relics smuggled abroad continues to pay off, with the artifacts surrendered by U.S. billionaire Michael Steinhardt after a legal battle set to soon join the thousands of pieces to return home over the last year

Artifacts belonging to Anatolia's historical heritage that were smuggled abroad are set to be handed over to the country's consulate general in New York this month from the collection of American billionaire Michael Steinhardt, a senior Turkish official reported.

Last month, in an anti-smuggling operation, the Manhattan Prosecutor's Office seized 180 cultural artifacts from 11 countries worth $70 million from the residence of hedge fund billionaire Michael Steinhardt.

Among the seized items, 14 artifacts were of Turkish origin, including "Stag's Head Rhyton" – a drinking vessel dating from 400 B.C. that's worth an estimated $3.5 million today, according to The New York Post. Other items from Turkish soil include a mother goddess idol, a mountain goat figurine, bird idols and a distinctively shaped Kilia-type idol.

Zeynep Boz, anti-trafficking head at the Turkish Culture and Tourism Ministry, told Anadolu Agency that they have been working diligently for two years to get these artifacts back, which carry great importance for the country's cultural heritage.

"These will first be delivered to our New York Consulate General. From there it will be brought to Turkey," she explained, adding that they hope to present the works to the public soon.

Diplomats expect to get the artifacts in the first half of this month, adding that these cultural assets will be shown at the Istanbul Archeology Museum.

"For decades, Michael Steinhardt displayed a rapacious appetite for plundered artifacts without concern for the legality of his actions, the legitimacy of the pieces he bought and sold, or the grievous cultural damage he wrought across the globe," read a prosecutors' statement as quoted by Boz.

In 2017, when Steinhardt sought to auction the Kilia idol at Christie's, Turkey tried to get the piece back as soon as possible, said Boz. Kilia Idol, also known as Stargazer, was stolen from Manisa in western Turkey.

But neither the auction house nor Steinhardt were willing to return the idol, so Turkey filed a lawsuit.

Noting that during the trial Turkey had shown very important evidence, Boz said: "It's very clear where the work was taken from. Such excavations can't be found anywhere else except Anatolia."

But the judges questioned why Turkey did not notice the idol earlier, when Steinhardt loaned it to the Metropolitan Museum, she added.

She explained that they tried to get back another Kilia idol as soon as it was seen in the auction catalog but the court decided in favor of Steinhardt at the time.

"We also appealed the decision of the United States court," she said, adding that Turkey expects the return of this artifact as well.

Another Kilia idol is among the artifacts that will be returned, she said, adding: "It's not the same size, but it's very important for us in terms of exhibiting the same culture."

Last month, Turkey announced that it had recovered some 3,480 of its cultural assets in 2021, thanks to the efforts of the country's anti-smuggling authorities.

The process for recovering artifacts involves multiple state agencies, including law enforcement and judicial authorities, as well as diplomatic efforts and court cases in the countries where the artifacts are found.

Taking cultural assets abroad without official permission has been illegal since the Republic of Turkey's was founded and earlier in the Ottoman Empire.

Under current legislation, unlicensed excavation and failing to report any uncovered artifacts to authorities are illegal.