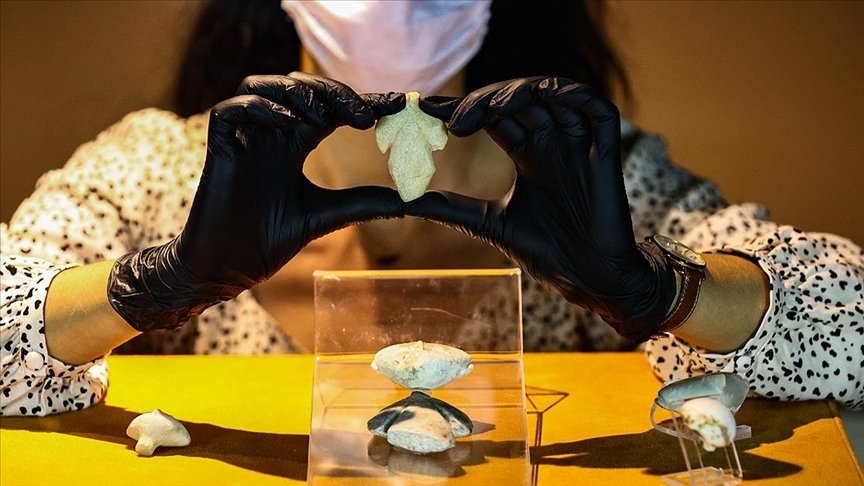 A museum staff member shows a "stargazer" statuette similar to the one smuggled to the United States, in Izmir, western Turkey, May 14, 2021. (AA Photo)
by Daily Sabah with Reuters Sep 08, 2021 9:07 am
RECOMMENDED

Guennol Stargazer, a small statuette will not return to its ancient home, Turkey, as a court in the United States rejected Turkish authorities' bid to retrieve the artifact believed to be smuggled out of the country decades ago.

U.S. District Judge Alison Nathan in Manhattan said Turkey "inexcusably slept" on its rights by not suing until April 2017, just before Christie's put the idol up for auction, though it should have known of the idol's whereabouts decades earlier. She said Turkey also did not prove that the 9-inch (22.9-centimeter) figurine, named for the slight upward tilt of its head as if toward the heavens, was excavated from Turkey after 1906, making the country its rightful owner under that year's Ottoman Decree. Nathan also rejected Turkey's suggestion that Steinhardt, a prominent art collector, ignored "red flags" about the idol's provenance.

The decision is a setback to Turkey's legal efforts in the United States to reclaim antiquities that were looted from the country. Nathan ruled after an eight-day nonjury civil trial in April.

According to Christie's, the idol dates from 3,000 to 2,200 B.C. and is one of the finest and largest preserved Anatolian marble female idols of the Kiliya type. Steinhardt and his wife paid $1.5 million for the idol in 1993. The idol fetched $14.5 million at the Christie's auction, but the unidentified telephone buyer walked away.

Christie's still possesses the idol. Nathan noted that the idol had been discussed in several publications over the years, and displayed at New York's Metropolitan Museum of Art from 1968 to 1993 and again from 1999 to 2007.

"The Met is a major public institution did not hide that the idol was part of the Guennol Collection," Nathan wrote. "Turkey failed to contact the Met seeking more information about the origins of the idol – a relatively low bar, all things considered, and one that Turkey should reasonably have surpassed," she added. In 1993, the museum had returned a set of artifacts known as the Lydian Hoard, to Turkey, after admitting that they knew the items were smuggled from Turkey when they purchased them.

Turkish officials have not commented on the ruling yet but in earlier trials, lawyers for the country had expressed that the idol had "dubious origins" and Steinhardt ignored Turkey's property laws. The Turkish side had also pledged to present comprehensive scientific evidence that the idol definitely belonged to Turkey and was taken out of the country while the 1906 decree was still in force.

The country has stepped up its efforts to retrieve artifacts smuggled abroad in recent years. In the past decade, it has managed to bring back 2,712 artifacts, from small statues to sarcophagi.

The artifact Turkey sought to recover is among a family of marble statuettes that were prevalent in ancient ages in Anatolia. Similar "stargazers" are already on display in Turkish museums. Statuettes are dated to the Middle and Late Chalcolithic periods and experts believe they were traded in southwestern and northwestern Anatolia in the period they were crafted. The first "stargazer" was discovered in the Kiliya settlement on the Gelibolu Peninsula in western Turkey.