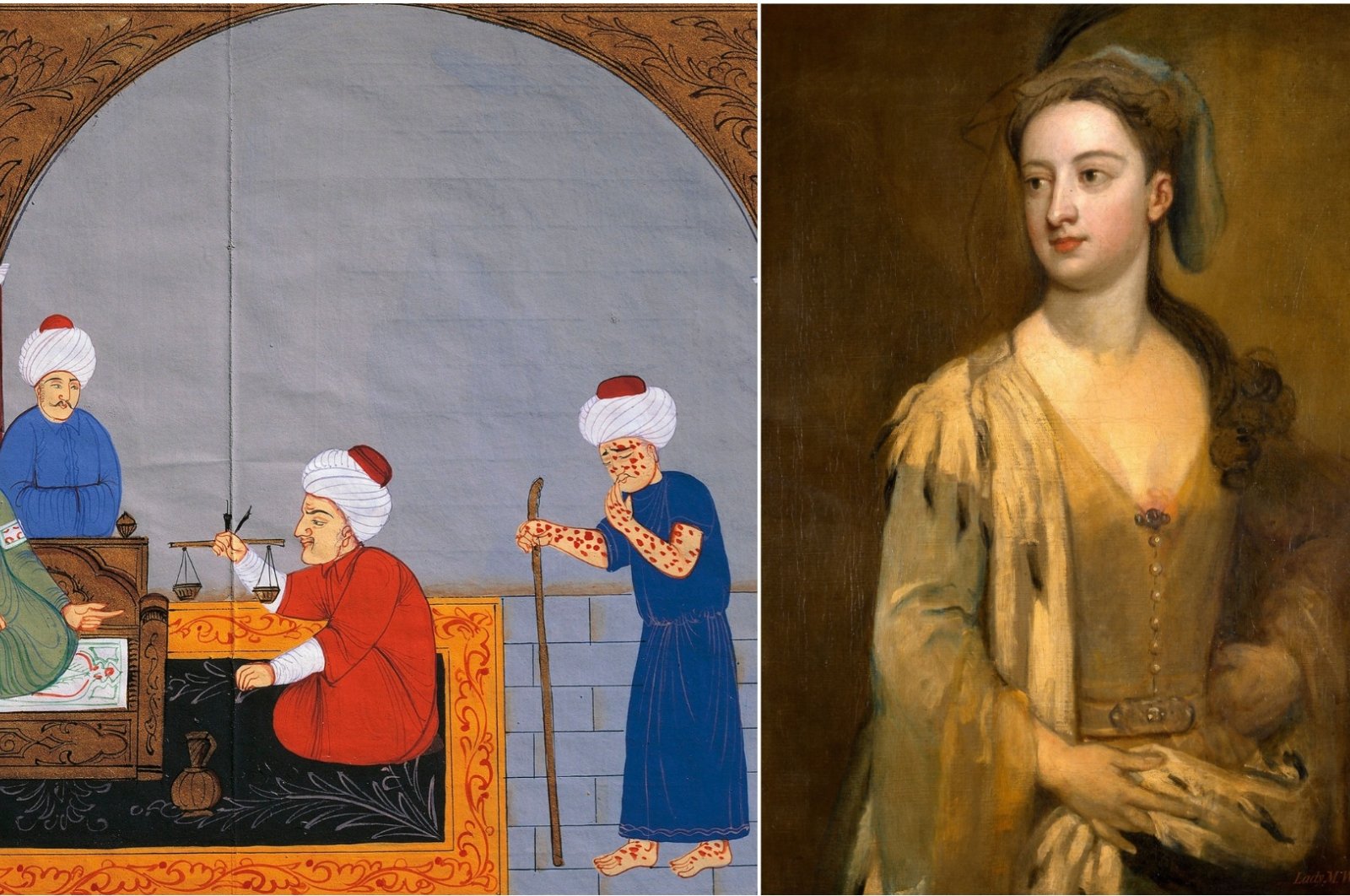 Ottoman manuscripts depict one of the fathers of early medicine, Ibn Sina, known in the West as Avicenna, treating patients with smallpox (L), but it wasn't until Lady Mary Wortley Montagu (R) saw it in Turkey that Europe developed the modern vaccine. (Istanbul University Library/Universal Images Group via Getty Images)
by DAILY SABAH May 03, 2021 11:10 am
RECOMMENDED

Praise and credit in science often go to those who popularized an invention, not to those who invented the idea first.

In 1840, Warren de la Rue created one of the first electric light bulbs in human history as he placed within a vacuum tube a platinum coil and glided an electric current through it, and alas there was light.

However, maybe the name Thomas Edison, who was to work on the same concept nearly half a century later, sounds more familiar to most as he was the one who took the framework, improved the design and reduced its price, thus popularizing the product.

Such is the case with preventing smallpox as well, as the East with its vast medical knowledge at the time and dominance in the field of sciences that lasted for centuries, had discovered the vaccine for smallpox hundreds of years before the West. When Europe rediscovered the cure, it was a victory claimed by the West, as it often has been.

Smallpox, which was one of the most terrible epidemics in human history, was among the primary causes of mass deaths in the 18th century. A febrile, severe and contagious disease that leaves scars on the face, covered with bumps filled with pus, it killed three out of 10 infected people while causing severe health problems and irreparable damage to the skin in the rest. In the 20th century alone, smallpox is estimated to have killed 300 million people and 500 million in the last 100 years of the virus's existence before it was eradicated in 1979.

The British even used this cureless disease as a biological weapon against France and Native Americans in the 18th century. Historical records show they gave blankets and handkerchiefs that belonged to the victims of the disease to native tribes, deliberately infecting these communities.

Smallpox, also known as the “Speckled Monster” in Western societies, was actually partially treated in the East using methods such as “variolation,” which were seemingly primitive vaccination techniques but largely prevented deaths, unlike those in Europe.

The method of inoculation, which had been applied for centuries against smallpox in Ottoman lands, was observed by the wife of the British ambassador to Istanbul in 1721. Lady Mary Wortley Montagu, in a letter she wrote to her country, explained with astonishment that something called vaccination against smallpox was deployed in Istanbul. The letter stands as the oldest document proving vaccine production in the Ottoman Empire.

This “variolation” procedure involved administering powdered smallpox scabs or fluids taken from pustules of someone with smallpox, subcutaneously applied to the arms or legs of a healthy individual that had not been infected, through superficial scratches made in the skin. The inoculated person would then develop pustules identical to those naturally caused in people with smallpox, but the effects of the disease would lessen significantly. In two to four weeks' time, the symptoms would disappear and the patient would recover, gaining immunity in the process.

According to some sources, this method was introduced to the Ottoman Empire by Circassian merchants in 1670. When the method, which became widespread, was seen by the wife of the British ambassador and applied on his own children, the West gained position for the first time in the war against smallpox. Wolfgang Amadeus Mozart was perhaps the most famous among many children who survived smallpox in the West thanks to this method.

The modern vaccine used today, however, is the result of 20 years of observation and efforts by an idealist British village doctor, Edward Jenner. Jenner observed that cowpox disease, which manifested itself as blisters forming on the udders of cows but passed in a short time, provided a certain resistance in the human body. Based on this idea, he injected a child with pus taken from the skin of a woman infected with cowpox. Fashioning a vaccine with the cowpox virus he obtained in 1796, Jenner made a healthy person mildly ill and immunized them against the smallpox virus.

According to modern medical literature, the first vaccine created in history is the smallpox vaccine, which used the vaccinia virus, which is thought to be a hybrid of the variola (smallpox virus) and cowpox viruses. Furthermore, in Western languages, the word “vaccine” actually comes from the word “vacca,” which in Latin means “cow.”

In December 1979, thanks to vaccine research and campaigns throughout the 19th and 20th centuries, scientists declared the end of smallpox. In fact, the mass vaccination campaign was so successful that smallpox has become the only disease that has been erased completely in human history. In other words, humans almost destroyed the lineage of the virus, leaving no space for it to be activated.

And today, thanks to vaccines, it remains completely eradicated. This technique has also enabled the production of vaccines that cured, and continue to cure, many diseases.

The World Health Organization (WHO) removed the smallpox vaccine from its mandatory vaccines list. Therefore, no one born after 1980 is immune to the vaccinia virus (VACV) or variola virus (VARV) that causes the disease. This is why the smallpox virus is defined as the world's most powerful potential biological weapon, more dangerous than nuclear war.