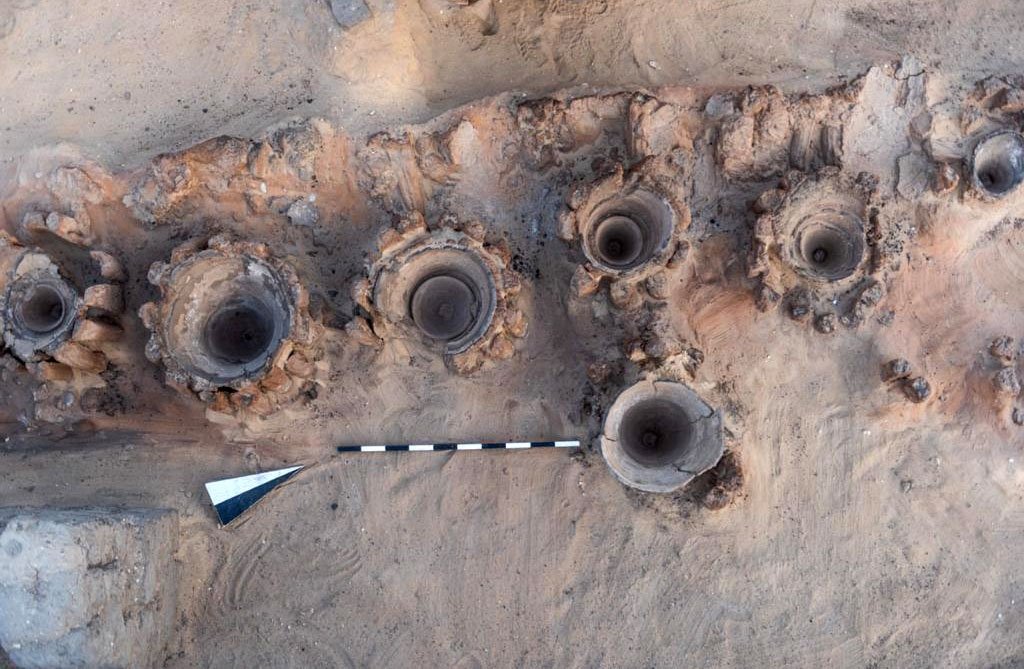 A handout picture released by the Egyptian Ministry of Tourism and Antiquities on Feb. 13, 2021, shows the remains of a row of vats used for beer fermentation, in a complex which may be the world's "oldest" high-production brewery, uncovered in the Abydos archaeological site near Egypt's southern city of Sohag. (Egyptian Ministry of Antiquities Photo / AFP)
by ASSOCIATED PRESS Feb 14, 2021 1:10 pm
RECOMMENDED

American and Egyptian archaeologists have unearthed what could be the oldest known beer factory at one of the most prominent archaeological sites of ancient Egypt, a top antiquities official said Saturday.

Mostafa Waziri, secretary-general of the Supreme Council of Antiquities, said the factory was found in Abydos, an ancient burial ground located in the desert west of the Nile River, over 450 kilometers (280 miles) south of Cairo.

He said the factory apparently dates back to the region of King Narmer, who is widely known for his unification of ancient Egypt at the beginning of the First Dynastic Period (3150 B.C.- 2613 B.C.).

Archaeologists found eight huge units – each is 20 meters (about 65 feet) long and 2.5 meters (about 8 feet) wide. Each unit includes some 40 pottery basins in two rows, which had been used to heat up a mixture of grains and water to produce beer, Waziri said.

The joint mission is co-chaired by Matthew Adams of the Institute of Fine Arts, New York University, and Deborah Vischak, assistant professor of ancient Egyptian art history and archaeology at Princeton University.

Adams said the factory was apparently built in this area to provide royal rituals with beer, given that archaeologists found evidence showing the use of beer in sacrificial rites of ancient Egyptians.

British archaeologists were the first to mention the existence of that factory in the early 1900s, but they couldn't determine its location, the antiquities ministry said.

With its vast cemeteries and temples from the earliest times of ancient Egypt, Abydos was known for monuments honoring Osiris, ancient Egypt’s god of the underworld and the deity responsible for judging souls in the afterlife. The necropolis had been used in every period of early Egyptian history, from the prehistoric age to Roman times.

Egypt has announced dozens of ancient discoveries in the past couple of years, including a 3,000-year-old sarcophagus that could "rewrite history" and mummies with golden tongues, in the hope of attracting more tourists.

The tourism industry has been reeling from the political turmoil following the 2011 popular uprising that toppled longtime autocrat Hosni Mubarak. The sector was also dealt a further blow last year by the coronavirus pandemic.