Billionaire Branson flies with own rocket to space 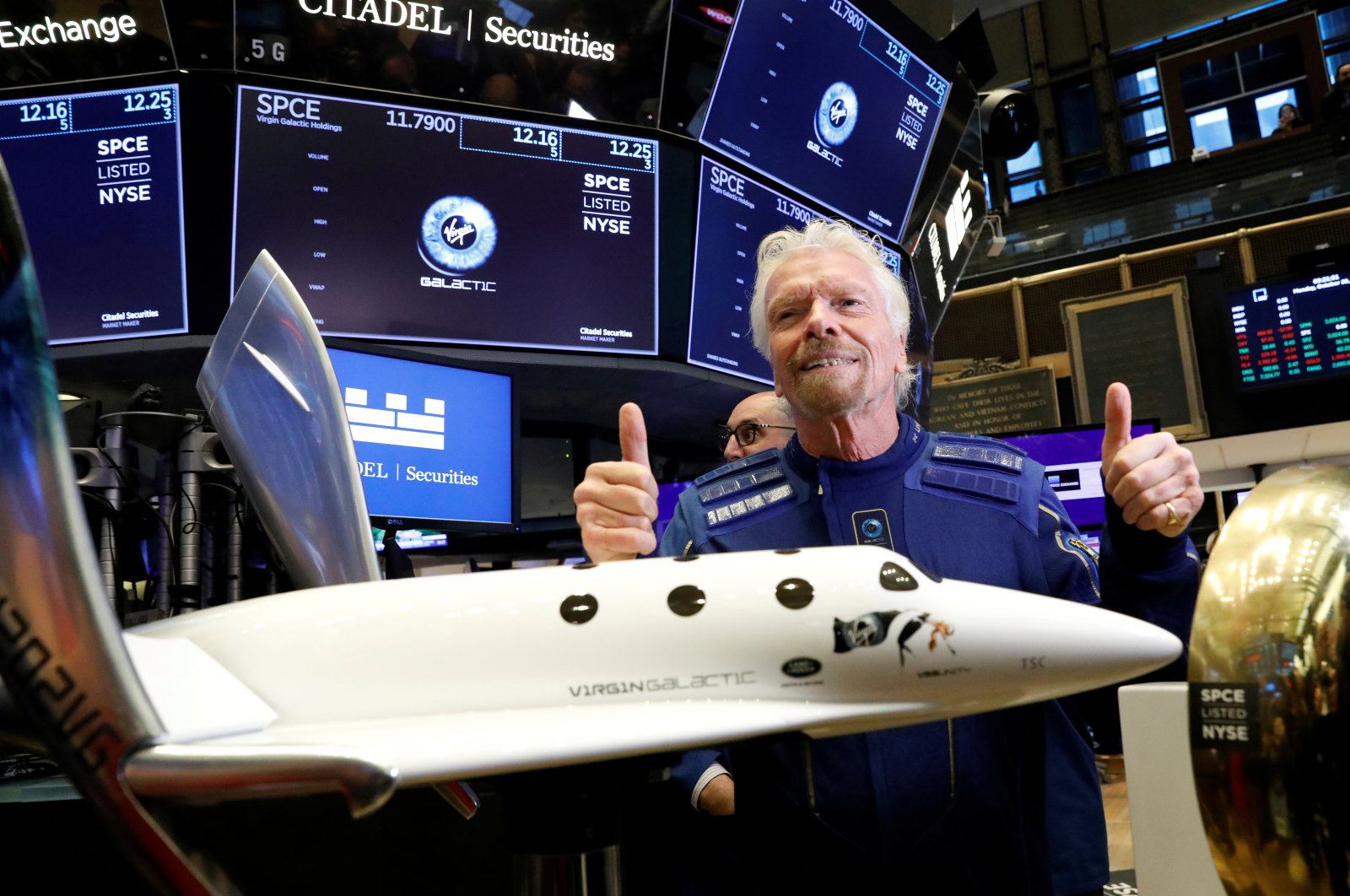 British Sir Richard Branson took off Sunday from a base in New Mexico aboard a Virgin Galactic vessel, becoming the first billionaire to leave Earth for space.

A massive carrier plane made a horizontal take-off from Space Port, New Mexico at around 8:40 a.m. Mountain Time (1440 GMT) and will ascend for around an hour to an altitude of 50,000 feet (15 kilometers), before dropping the spaceplane beneath it.

Branson beats the likes of rival mega-rich Elon Musk and Jeff Bezos to the punch in the heated space race and promoting his burgeoning astro-tourism venture in the process.

Branson's attempt will come decades after burnishing his reputation as a wealthy daredevil mogul in a series of boating and hot-air balloon expeditions.

The billionaire's Virgin Galactic Holdings, Inc. is due on Sunday to send the company's passenger rocket plane, the VSS Unity, on its first fully crewed test flight to the edge of space, with the British billionaire founder among the six individuals strapping in for the ride.

The gleaming white spaceplane will be borne by a twin-fuselage carrier jet dubbed VMS Eve (named for Branson's mother) to an altitude of 15,000 meters (nearly 50,000 feet), where Unity will be released and soar by rocket power in an almost vertical climb through the outer fringe of Earth's atmosphere.

At the apex of its flight some 89 kilometers (55 miles) above the New Mexico desert, the crew will experience a few minutes of weightlessness before making a gliding descent back to Earth.

If all goes according to plan, the flight will last about 90 minutes and end where it began, on a runway at Spaceport America near the aptly named town of Truth or Consequences.

Virgin's Unity 22 mission marks the 22nd test flight of the spacecraft and the company's fourth crewed mission beyond Earth's atmosphere.

But it will be the first to carry a full complement of space travelers – two pilots and four "mission specialists," Branson among them.

Although the mission is seen as a potential milestone in helping transform citizen rocket travel into a mainstream commercial venture, spaceflight remains an inherently hazardous endeavor.

An earlier prototype of the Virgin Galactic rocket plane crashed during a test flight over California's Mojave Desert in 2014, killing one pilot and seriously injuring another.

If successful, Sunday's flight will also give Branson bragging rights to besting rival Jeff Bezos and his space company, Blue Origin, in what has been popularized as a "billionaire space race." Bezos, the founder of online retail giant Amazon.com, is slated to fly aboard Blue Origin's suborbital rocket ship, the New Shepard, later this month.

Branson's official job on his flight is to "evaluate the private astronaut experience," and his observations will be used to "enhance the journey for all future astronaut customers," according to Virgin's press materials.

But Marco Caceres, a senior space analyst for the Virginia-based consulting firm Teal Group, said the Branson and Bezos ride-alongs were each "a bit of a publicity stunt."

Will see you there to wish you the best

"If they succeed, their ventures will be taken more seriously," Caceres said. "There's plenty of multimillionaires in the world that would like to go up on an adventure, so long as they see it as relatively safe."

Virgin Galactic and Blue Origin, along with fellow billionaire entrepreneur Elon Musk's SpaceX, are competing head-to-head in the emerging business of space tourism, though Musk has a big head start.

In a Twitter exchange with Branson early on Saturday, Musk said that he would attend the launch "to wish you the best." It was not immediately clear if Musk would be present at the launch site or join online.

SpaceX, which plans to send its first all-civilian crew (without Musk) into orbit in September, has already launched numerous cargo payloads and astronauts to the International Space Station.

Branson, 70, insists there is plenty of demand from wealthy would-be citizen astronauts to go around, and that he had no intention of trying to upstage Bezos.

"It's honestly not a race," Branson told Reuters in an interview earlier this week. "If it's a race, it's a race to produce wonderful spaceships that can make many more people be able to access space. And I think that's both of our aims."

The spaceplane's two pilots, Dave Mackay and Michael Masucci, will control the ignition and shutoff of the ship's rocket engine and activate the vehicle's "feathered" tail maneuver for re-entry.

The Virgin brand, including Branson's airline and former record label, has long been associated with exploits of derring-do by its flamboyant founder. Branson set a new record for the fastest boat crossing of the Atlantic in 1986, a year after his initial attempt ended with a Royal Air Force helicopter rescue when his vessel capsized.

In 1987 he made a record-breaking Atlantic crossing by hot-air balloon, though again he had to be rescued from the sea. He went on to break at least two other air-balloon speed records but failed to complete any of three bids to circumnavigate the globe by balloon.

As for Sunday's flight, Branson said this week that he is excited, "and I really don't think there’s anything there to be scared about."

Assuming the mission goes well, Virgin has said it plans two further test flights of the spaceplane before beginning commercial service next year.

The company has said it has received more than 600 flight reservations, priced at around $250,000 per ticket, but hopes eventually to slash the cost of each seat to $40,000.