Finding the sacred in Istanbul: The pilgrimage site of Eyüp Sultan 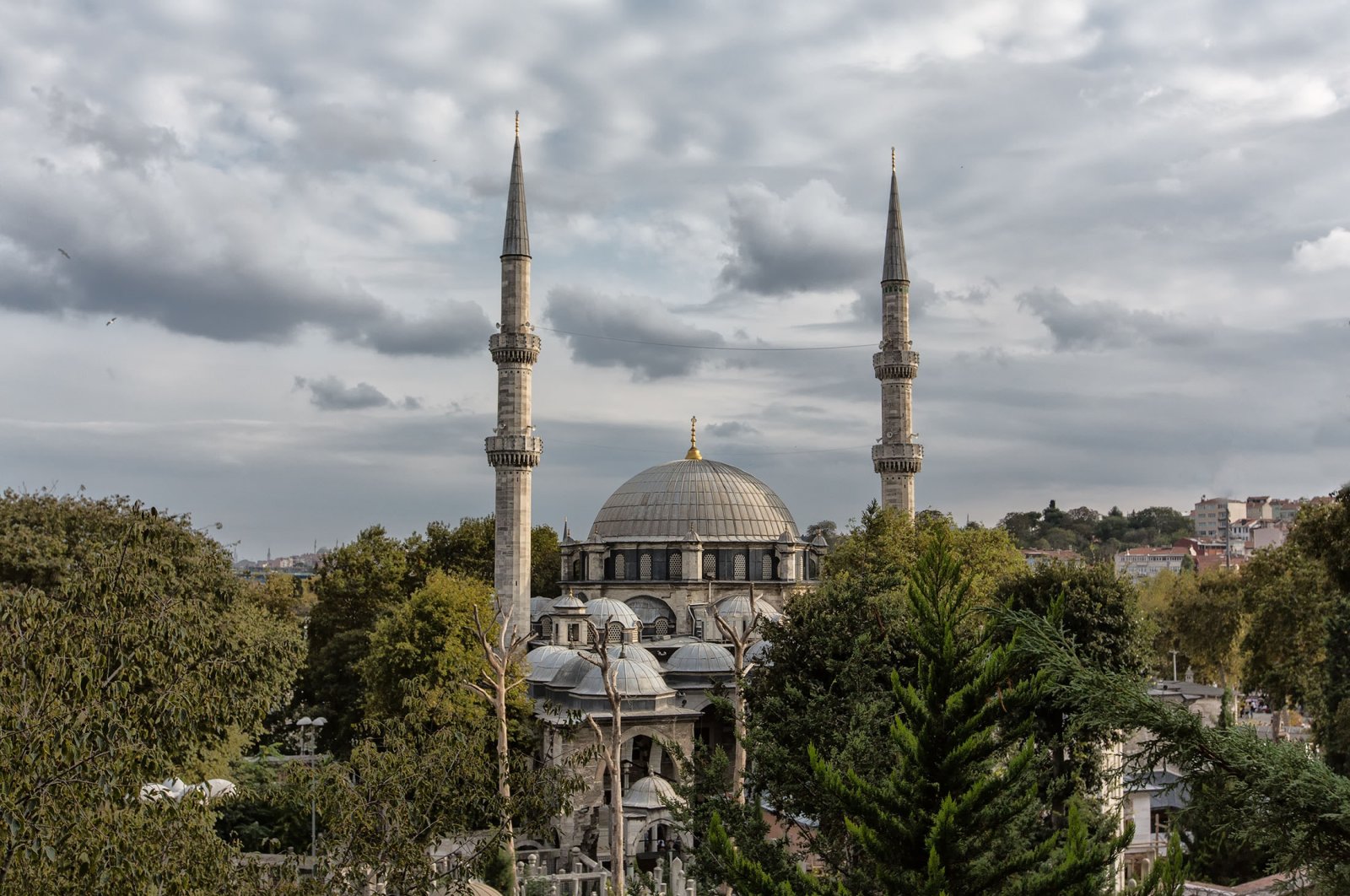 An expat takes us to the heart and Islamic spiritual center of Istanbul, Eyüp, which may be the perfect place to keep the spirit of Ramadan alive amid the COVID-19 pandemic

As a new expat in Istanbul, I was lucky to spend my daily trips from my home on the Asian side to my Turkish classes on the European side of the city on a ferry – instead of fully packed buses and metros. All Istanbulites know, spending your morning moments while crammed in between dozens of other grumpy commuters is not really an energy booster. But, the 40-minute ride on the water along the Golden Horn (Haliç) could have not been a better way to start each day back then; in good weather, I could enjoy the fresh air, watch the seagulls and occasionally hope for a dolphin sighting. In poor weather, I would sit inside and work on my homework while sipping tea from the ferry's kiosk.

One day after my classes, I decided that it was time to get acquainted with the neighborhood of Eyüp Sultan, which was a stop on my daily commute on the Üsküdar-Haliç line of Istanbul’s city ferries. Eyüp Sultan had been described to me by many of my foreign friends as the most spiritual area in the city. It is not like Istanbul does not offer enough sites for religious life with its numerous mosques, churches and synagogues, but here I discovered that located somewhat on the margins of the city’s heart was a gem for those who were into exploring the different scenes and senses of Istanbul’s corners or observing everyday religious rituals beyond the daily prayers. Devout Muslims from near and far come namely to Eyüp Sultan for "ziyara," which in Turkish and Arabic means a pious visitation or a pilgrimage to a holy place, tomb or shrine.

It all started with Abu Ayyub al-Ansari, an older companion of the Prophet Muhammad, who was part of the first Arab siege of Constantinople that took place in 674-678. He died without witnessing the army’s success, but before his death, he expressed his last wish to be buried by the walls of Constantinople once they had been reached. Today, his shrine is located in the courtyard of the Eyüp Sultan Mosque, in the neighboring district to Fatih, circulated by wall ruins. His shrine attracts thousands of visitors daily. Some visitors come there as tourists, both foreign and Turkish, and for those who believe in his shrine’s sacredness, the visit encompasses hope for answered prayers.

The ziyara as a religious ritual is debated amongst Islamic scholars and it is noteworthy to recognize that it is not considered an obligatory act as such is the pilgrimage to Mecca in Saudi Arabia. However, it manifests itself in different ways across the Muslim world and is part of what we can call everyday religious lives. Whoever is interested in exploring the tombs in Istanbul can easily find a list of 120 sites on the official website of Turkey’s Ministry of Culture and Tourism. However, not all historical figures for whom tombs have been built are considered a "wali," or “Friend(s) of God” like Abu Ayyub al-Ansari is. The term itself is not quite equivalent to, yet in some respects, is comparable to the Christian concept of saints. What is understood as “friendship” in this context signifies the supposed closeness between the person and God. The big difference between Christianity, especially Roman Catholicism, and Islam is the process of upholding a person as “holy.” There has never been and still, there is no institutionalized hierarchy among the Islamic clerics or a system of beatification that would dictate a person as a “saint.” In the history of Islamic civilization, the process has been rather informal and based on the popular consensus of common believers and their acknowledgment of the individual’s particular position in the community.

Arriving in Eyüp by ferry on the Üsküdar-Haliç line or by bus or tram from Eminönü, you will reach the Eyüp Sultan Mosque by passing the souvenir shops near the mosque complex. The shops are essential for those who are going for the ritual of ziyara as they can find there the necessary last-minute accessories for the day: prayer beads of different lengths, excerpts of the Quran, and scarves, and Turkish delight, called lokum in Turkish. In Eyüp, the Turkish delight has a higher purpose than sweetening your daily tea moments; it is offered to fellow visitors at the mosque by some of the pilgrims as a way to “thank” God. If you visit Eyüp in the warmest times of the year, arriving at the "meydan" (town square), you will find visitors cooling off from the summertime heat by sitting beside the big fountain or indulging in feeding the pigeons. Even for those who do not believe in the power of ziyara, there is something to be offered in Eyüp. The Turkish sign by the birdseed vendor reminds the visitor: “The Prophet has said: Feeding birds is an act of worship.”

Entering the inner courtyard of the Eyüp Sultan Mosque, it is difficult to first distinguish the specificities of the ziyara ritual and if you are not yourself into waiting in line to visit the shrine, I recommend pausing for a moment to sit on the marble seats and take on the role of an anthropologist with observation. It is believed that the blessings, or the baraka, of the deceased remains in the shrine and the spaces in their immediate vicinity, are also considered holy. You will notice that here the separation of the sacred and the profane is not clear cut. The inner courtyard of the mosque differs from other typical bigger mosques in Istanbul. Instead of a fountain or a water source for ablutions, at Eyüp Sultan Mosque you will find a green space with a big sycamore (çınar) tree that casts its shadow over the yard. You will also see that many of the visitors stop by this green space and whisper their supplications facing the tree. In the Turco-Iranian world, sycamores are considered special and as the botanist Amots Dafni has noted, these sacred trees in connection with shrines are believed to have the power to grant divine blessings. While I was puzzled by this practice, I encouraged myself with my little Turkish and asked the mosque worker Mahmut Bey about the tree. He told me the story of how the grave of Abu Ayyub al-Ansari was found: After the conquest of Istanbul in 1453, the lead advisor of Sultan Mehmet II the Conqueror, Akşemseddin, had a mystic dream about its location, and because of the discovery, the tree was planted next to the grave. The significance of Eyüp Sultan in the history of Islamic civilization became more obvious to me; the first and the last Muslim conquerors of Istanbul had laid their visible marks here with the tree as a living symbol next to the grave of Abu Ayyub al-Ansari.

Another specificity in Eyüp is that here, female visitors dominate the space. Although many families bring their young sons to Eyüp in connection with their "sünnet" celebrations, the ritual of circumcision of boys, women form a greater part of ziyara. Scholars of religion have explained that saints are reputably able to solve problems affecting women, and in Eyüp, Muslim women from all social and religious backgrounds dressed in different ways, covered and non-covered, gather for spiritual moments. While I was sitting on the marble steps and doing my people-watching, a woman came to me and asked if I had a “Yasin” with me. I responded with a no, and immediately it caught my attention that many of the visitors seemed to be reciting this chapter of the Quran as a part of the ziyara ritual. I understood the logic behind it, as I knew that this specific chapter is regarded in the Islamic tradition as especially blessed and effective for easing any hardships. I remembered seeing them being sold as booklets in the souvenir shops outside the mosque complex, but you may also see young boys roaming around and earning their pocket money from selling the booklets. I reminded myself how the materiality of the sacred in religion and the profane of human life will always complement each other.

I concluded my visit to Eyüp with the realization that like the city itself the shrine bears different meanings and objectives for each visitor. For me, the visit to the site was a moment of peace and quiet, an escape from the buzz of the city and a chance to learn more about the history of the place I was starting my years of expat life in. In the coming years, I would not leave Eyüp Sultan out of the program every time I hosted friends from abroad and guided them through Istanbul. Before I left the mosque, next to me sat a young non-Turkish woman who suddenly became very emotional. For a moment, I hesitated what to do but decided finally to check up on her. We chatted a little and she told me how she did not believe in the ritualistic aspect of visiting shrines but more importantly the visit reminded her of the great person of Abu Ayyub al-Ansari. She said that “our” generation does not appreciate the easy times we live in and that “we” have forgotten the deeds and sacrifices the companions of the prophet went through. She concluded by saying that even if one did not believe in the ritual of ziyara, visiting the shrine was a good way for Muslims to have a reminder of where they came from. Eyüp Sultan of Istanbul cannot be overseen as a significant part of the history of the Muslim world.