Travels of a solo Pakistani girl: Diving deeper into Mardin 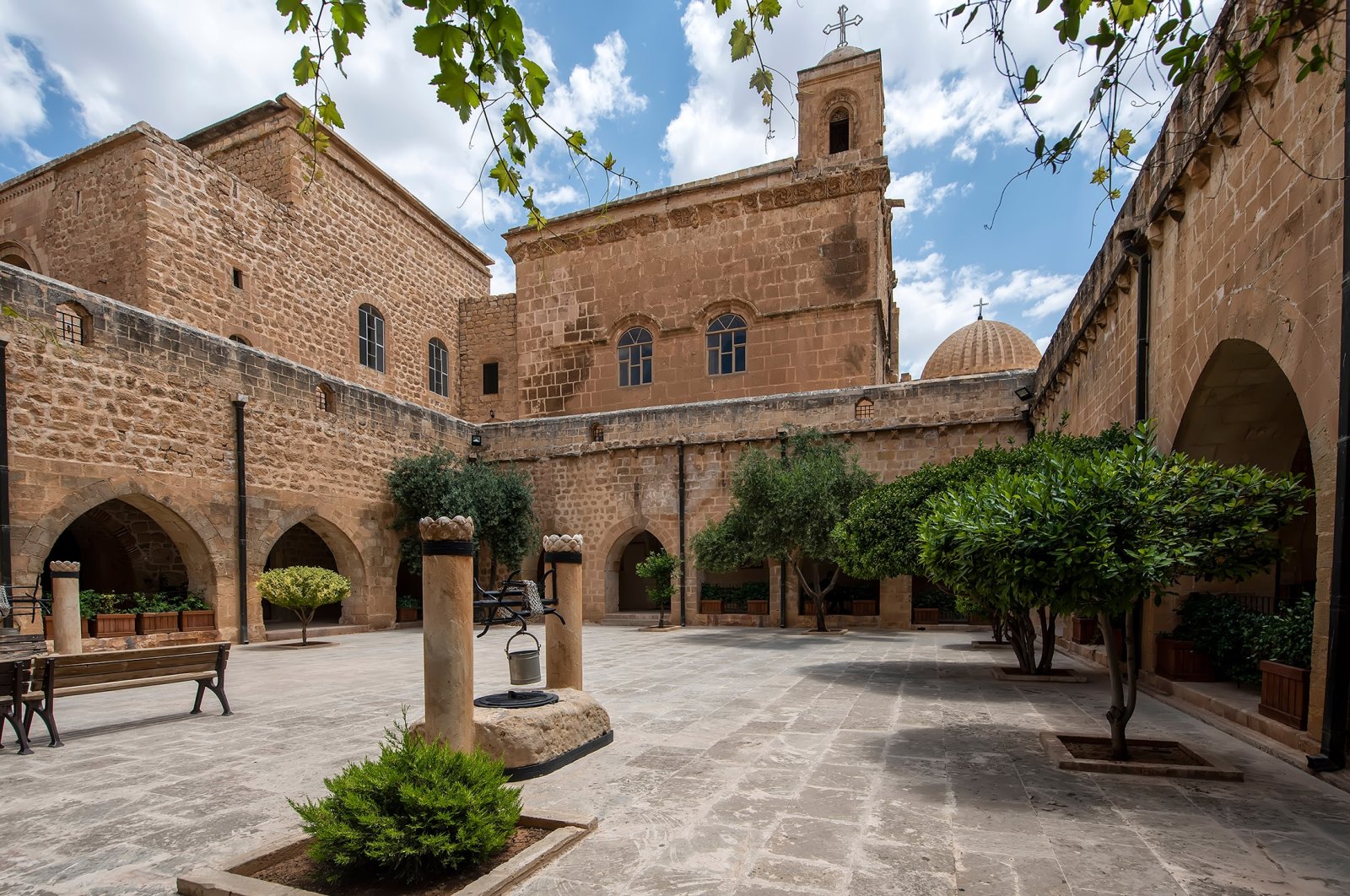 My next stop in Mardin was the Saffron Monastery, which is known as the Deir-ul Zafaran (Mor Hananyo in Syriac, also known as Monastery of Saint Ananias).

The monastery is located a few kilometers outside downtown Mardin in the historically rich Tur Abdin region. Perched on a hill overlooking the surrounding plain, it was originally the site of a temple dedicated to the Mesopotamian sun god Shamash, and was subsequently converted into a Roman citadel. When the Romans withdrew from the area, it was converted into a monastery and served as the place of residence for Assyrian Orthodox patriarchs for the next 640 years, until 1932. This cemented its status as a place central to Syriac orthodoxy. Its name is attributed to the saffron flower which grows in abundance in the area, as well as to the warm hue of the stones used in its construction.

To reach it, you either drive or take a cab as there is no public transport to be availed. I set out for the monastery after breakfast. According to the map, it was around an hour’s walk from my hotel. However, even at that early hour, it had begun to grow uncomfortably hot; half an hour after having departed, I decided to take a cab there and back. This turned out to be a fortuitous decision, as it eventually turned out to be a 15-minute car ride, on an unshaded road winding through hills largely bare of vegetation. Plus, when we pulled up to the monastery it appeared to be closed; I asked the driver to take me back into town so I could return later.

To my delight, the road back happened to take us by Kasımiye Medrese, high on my list of sites to visit. Having been constructed in the mid to late 15th century, this exceptional example of Artuqid architecture is made of cut stone and brick and has been very well preserved. A narrow hallway with vaulted ceilings leads to the inner entrance, where you step into a large open courtyard two stories high. A fountain and a pool lie right in the center, and the walls facing south feature enormous arched windows secured with iron grills. A brief visit to this place will suffice, but it makes for fantastic photography.

Eventually, after trying our luck at a couple of churches that were closed due to the pandemic, I asked the driver to drop me back at the monastery. By then, it had opened and a small group of tourists had already gone up ahead on the shaded walkway to the entrance.

After passing through the main threshold, you reach the bottom of a large flight of stairs. Climb up and go past the door, making sure to glance behind you at the scenic panorama of courtyards on either side and a view of the complex’s perimeter. The door leads to a narrow passage with an open courtyard to your left and a series of rooms to your right. The courtyard is small but beautifully appointed. A trellis stands on one side, there are two small wells in the middle, and flowering trees dot the entrances to individual cells. Benches placed strategically around the edges make it an ideal spot to sit for a few minutes and absorb the quiet of your surroundings. Just off the inner entrance, to the right, is a tiny courtyard and the entrance to the cellar; this large room with sunken recesses was used by worshippers when the site had been a sun temple.

After completing my tour, I walked back down to the reception and asked the resident guides if they could call me a cab. They obliged and, while I waited, very kindly insisted I share their lunch of lahmacun and yogurt dip with them.

Of tea and dinner on rooftops

Back in town, the streets were mostly empty due to the weekend curfew. Although it was hot outside, this was a good opportunity to explore the main street without the onslaught of crowds and traffic that normally line it during the day. Strolling further down from the main square, I came across the Şeyh Çabuk Camii, a 13th-century mosque. This is purportedly home to the tomb of Hazrat Abdullah bin Anas, which lies inside a low ceiling hall. A brief visit and a quick prayer later, I headed back out, this time in the direction of the Zinciriye Medresesi. It was located on the uphill side of the main street, so I stopped first for some ice cream at Sadık Künefe. Their orange ice cream, generously rippled through with candied peel, was excellent.

The Zinciriye seminary, it turned out, was closed on Sunday. A trio of college-aged friends was passing by and I asked them when it would open; they informed me it will stay closed until the next morning. Hot, and in need of a drink, I was about to go back down when the girl asked if I would have tea with them, and the guys enthusiastically nodded in encouragement. I agreed – this would turn out to be a fantastic decision – and we walked a few steps down the street to a cafe, where the girl’s mother was also waiting for them. The place itself is an airy rooftop eatery situated right at the top of the old city and with panoramic views for miles.

We sat on benches at a table underneath a trellis of colorful umbrellas. Over tea and snacks, I discovered that all of them were tourists in Mardin. They asked questions about life in Pakistan in general and why I had decided to visit Turkey. Every now and then, the conversation would take a turn from the serious into rib-tickling hilarity, usually brought on by a badly translated sentence or by the youngest guy’s cheeky efforts to try and fix me up with his body-builder brother. After an hour or so, we reluctantly parted ways. I had had a genuinely wonderful time with them, and I hope that somehow this recollection of the time we spent there reaches them, with my thanks.

Back down, I returned to the hotel for a rest before dinner. This would be at the Doboo restaurant, a rooftop establishment owned by a woman named Dilek. It is hard to beat a candle-lit terrace and an excellent meal of lamb with rice, çiğ köfte (raw meatball) and kibbeh (traditional dish made of bulgur and minced onions). Dilek personally oversaw each meal being cooked (she explained they were family recipes) and mingled with all her guests. As I ate, she discussed Mardin’s history and local cuisine with me, and I quickly formed the impression that she was a respected local institution. On learning I had had a brief but unpleasant experience just before dinner, in the form of a strange man seating himself at my table and presenting himself as the owner, she insisted on accompanying me back to my hotel. Once she had seen me to my room, she asked me to come by the following day for lunch and we said goodnight.

An unfortunate event and a triumphant discovery

The following day was Monday and I had planned to take a day trip to the city of Diyarbakır, easily reached by an hour on public transport. The universe, however, had other plans. Our hotel served breakfast on the terrace; as I descended to my room with my phone in hand and working out logistics for the trip ahead, I lost my footing on the crumbling edge of one of the ancient stone steps. This resulted in a back injury that pushed any immediate thoughts of travel straight out of my mind.

After an hour spent lying in my room in pain, I decided I had had enough. I took a couple of painkillers, just enough to slightly dull the ache, and marched out of the hotel toward the 14th-century Zinciriye complex. This was probably not the wisest thing to do since going anywhere in Mardin requires climbing or descending stairs, and now every step hurt. But the alternative was wasting whatever time I had left, and I made the obvious choice.

Many flights of stairs later, I arrived at the seminary and went inside. The building, unfortunately, was largely unkempt. A place of exceptional architecture, it was disheartening to see parts of it overrun with weeds and the small pools filled with long stagnated water. When I had climbed two stories up to the roof, however, the sight before me pushed out all other thoughts: this was the place where the "6 Days" video had been shot, the one that had introduced me to a place called Mardin, and I had finally found it! Overjoyed, I scurried around the roof taking pictures of its imposing twin tombs and making videos of the craggy mountainside overlooking the plains below. I had to work around a couple of bridal photoshoots for this, but it was worth it.

Having taken my fill of the place, I climbed carefully back down and returned to the main road in search of refreshment. There was a small patisserie, where I tried the dark chocolate and blackberry ice creams (heaven in two scoops!). The kindly owner, Beşir Bali, asked where I was from. When he learned I was from Pakistan, he smilingly brought me a bottle of cold water, followed by a plate of baklava and a cup of lemonade. I gratefully consumed all of it as we made small talk. But when I tried to pay, he would have none of it, insisting that he could not accept payment from a guest from his brother country. This warmth and generosity of spirit were truly touching.

A short while later, I headed back to Doboo for lunch and was welcomed by a smiling Dilek. She ordered a plate of mincemeat stuffed courgettes for me (phenomenal fare, as was expected) and asked about my day. Every now and then she would get up to direct her staff, which was busy setting up a corner of the terrace for a surprise marriage proposal. After stubbornly refusing to let me pay for lunch, she wished me luck as I said my goodbyes and asked me to come by if I was ever in town again.

I decided to call it an early day and headed back to my hotel. While I walked, I reflected on the variety of experiences I had had. The one or two instances of unpleasantness were mere moments in the world of kindness that I was lucky to experience, quite literally since the very minute I had stepped foot in Mardin. It was both humbling and uplifting and had certainly made this visit memorable in many ways.

As I looked over my travel plans to Şanlıurfa for the following day, I reflected that the rest of the trip had much to live up to in terms of the hospitality I had been blessed with thus far.