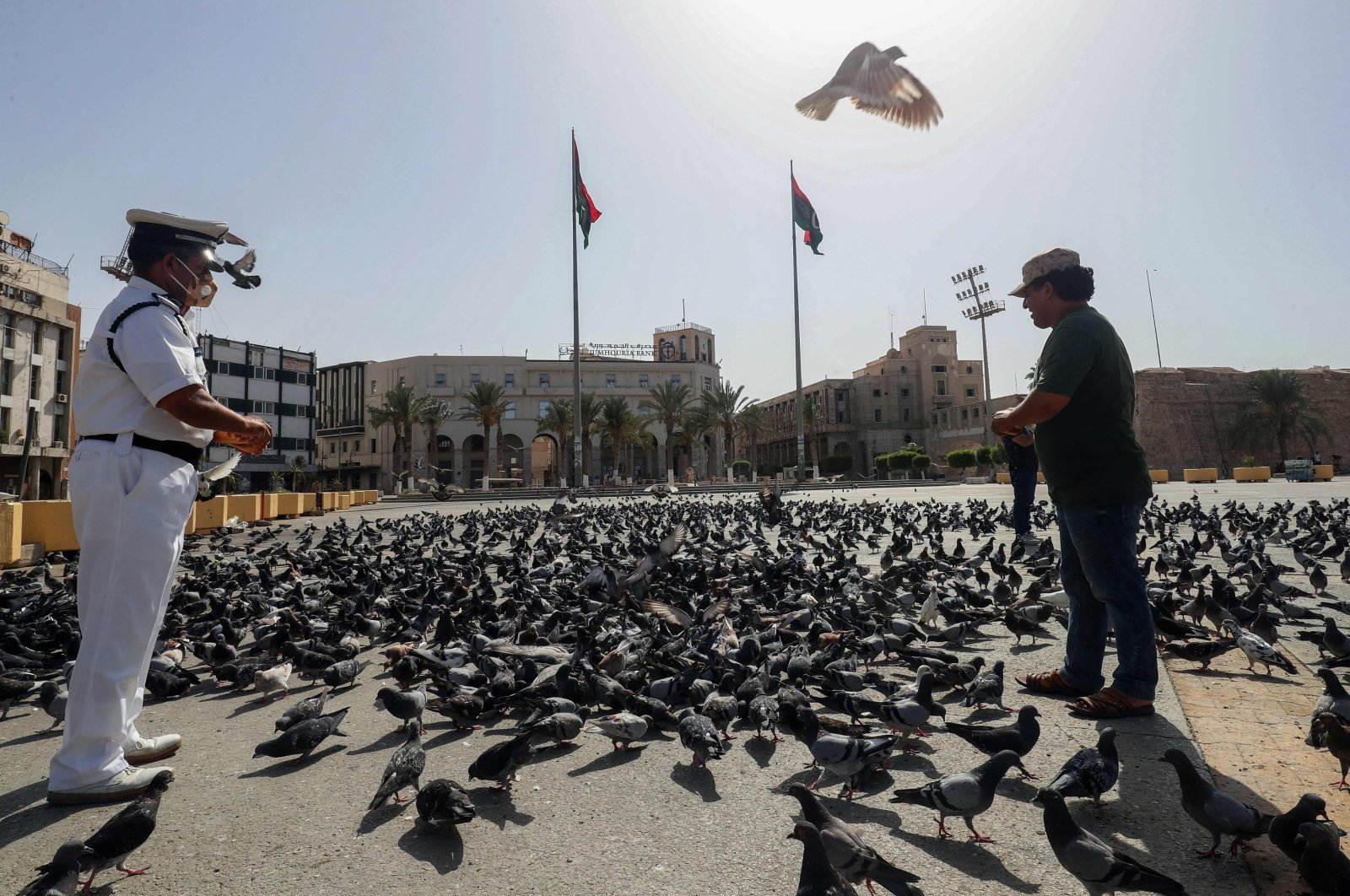 'If Libya wins this battle against the EU and U.S., they will have their country back'

The U.S. opposition to Moammar Gadhafi, the late Libyan dictator, had started even before the Libyan operatives planted a bomb on Pan American Flight 103 in 1988, killing all 243 passengers and 16 crew in what became known as the Lockerbie bombing. With a total of 270 fatalities, it is still the deadliest terrorist attack in the history of European aviation.

Gadhafi had finally accepted responsibility for the Lockerbie bombing and paid compensation to the families of the victims, in 2003; but it was too late, an international coalition had been put together to topple the Libyan regime and its downfall had already begun. The Central Intelligence Agency (CIA) and Defense Intelligence Agency (DIA) had recruited a group of Libyan officers in Chad in the Chadian-Libyan war.

At the time a colonel, Khalifa Haftar and nearly 700 of his men were captured as prisoners of war. Gadhafi had disavowed Haftar and the other Libyan officers to save himself from the ire of the U.S. and other European states supporting Chad. But he had earned himself a powerful enemy in Haftar, who, promoting himself to general and then aligning with the National Front for the Salvation of Libya (NFSL), a U.S.-supported opposition group, organized an attack on his former boss from Zaire.

However, the U.S. had not provided the financial aid it had promised to Zaire. Haftar and his army were expelled to Kenya, and the CIA had negotiated a settlement around 1990, moving Haftar and 300 of his soldiers to the United States under the U.S. refugee program. Once in the U.S., he became a citizen. He then tried his hand once again in March 1996, taking part in a failed uprising against Gadhafi in the mountains of eastern Libya, but retreated home to McLean, Virginia, the neighborhood where the CIA is headquartered.

Haftar, now having promoted himself to the rank of lieutenant general, returned to Libya and joined the Libyan revolution. His spokesperson announced that Haftar had been appointed commander of the military, but the National Transitional Council denied this. Abdel-Fattah Younis was commander-in-chief of the armed forces, while Haftar had assumed the third most senior position as the commander of ground forces. Younis was assassinated later that summer, and Haftar appointed himself as the overall commander of the new Libyan army, proclaiming his loyalty to the revolution that overthrew Gadhafi and underlining his military experience.

In February 2014, Haftar, in a televised announcement, said that the General National Congress (GNC), the elected parliament, had been dissolved and that he was creating a caretaker government to oversee fresh elections. Haftar urged Libyans to support him against the GNC. Luckily, his appeal did not lead to a general uprising. His announcement was soon dismissed by the then-acting Prime Minister Ali Zeidan and Haftar's actions were condemned as “a ridiculous coup bid.” But, with the help of his CIA and DIA handlers, Haftar began a coordinated air and ground assault against the Libyan parliament forces.

To cut a long story short, after three years of fraternal fighting, in July 2017 Haftar announced in a televised speech that he had finally taken full control of Benghazi, the second-largest Libyan city and home to large oil fields and export facilities, declaring he had purged the area of conservatives. But the other part of Libya was in the hands of the Government of National Accord (GNA), the recognized representative of the Libyan people. The European nations, especially France, that had been showing a very strange interest in Libyan affairs since 2011 and the U.S., which had fortified Haftar’s position with heavy weapons, did nothing as the country was dismembered. Since then every year they have uttered a few perfunctory words at the opening of the U.N. General Assembly (UNGA) about how strongly they support the idea of a unified Libya. That is all.

Why Turks in Libya?

Enter Turkey! What international sources describe as “the Turkish military intervention in the Second Libyan Civil War” was anything but military. Turkey expressed its support of the U.N.-recognized GNA and in January 2020 the Grand National Assembly of Turkey (TBMM) authorized a one-year mandate to deploy troops to Libya, if necessary. The Turkish military deployed dozens of on-the-ground advisers to provide training and operational support, air support through unmanned aerial vehicles (UAVs), a handful of intelligence operatives, as well as three navy vessels to support Libyan ground forces. It was also reported that in addition to the deployments of its own troops and equipment, Turkey was hiring and transporting Syrian fighters from the Turkish-backed Syrian National Army to support and bolster the manpower of the GNA.

In addition to the military support, Turkey and the GNA signed a maritime boundary treaty in order to establish an exclusive economic zone (EEZ) in the Mediterranean Sea. With it, they now claim rights to ocean bed resources. Greece and Egypt had infringed upon Libya’s sovereignty over its maritime resources. As expected, the Egyptian And Greek governments, allies of Haftar’s Tobruk government, denounced the Turkish-GNA maritime and military deal. Egypt's parliament approved a bill for the deployment of its army to Libya in the name of national security and fighting terrorists; but so far, the Egyptian soldiers have yet to show up. Russia also fell in with the Haftar camp, supporting him with the Wagner Group, a Russian paramilitary organization. This is still the most enigmatic situation in the whole Libyan puzzle. When asked, the Russian officials simply say the Wagner group is a private company and it is not owned and operated by the government.

What has happened in the 16 months since the Turkish-Libyan maritime and military deal has come in effect?

A. The GNA has successfully started implementing the U.N. approved unification plan, and is now just one election away from unification.

B. The Europeans and their allies in Egypt and the United Arab Emirates (UAE) have been silenced.

At this point, all the curious minds are wondering why the U.S. has been so silent. After all, Haftar is their citizen and – other than the Russian boys – the military equipment he is using belongs to them.

Wonder no more! The Americans have begun oh-so diplomatically joining the chorus. Richard Norland, U.S. special envoy for Libya and ambassador to Libya, very kindly invited Turkey to leave Libya and voiced the U.S.' wish that Turkey and Russia begin to discuss “the departure of the Syrian fighters on each side.” Moreover, yet very diplomatically, he adds that “getting the departure of Russian and Turkish forces themselves is going to be 'a little difficult;'" however, encouragingly he adds that “the 5+5 Joint Military Commission also can play a role in this.” The U.S. envoy finally lets the cat out of the bag:

“There are a number of significant figures in the Libyan political and military scene right now. Gen. Haftar is clearly one of them, and his influence in helping, particularly in unifying the military institution in the country, could be significant.”

Ambassador Norland was clearly the best-qualified person to be sent to Libya to repair the harm done by his own country. Born in Morocco, a graduate of Georgetown University, with masters’ degrees from Johns Hopkins University and the National War College, having served in the State and Defense departments, a speaker of Russian, French and Arabic, Norland should know that he isn't chasing a pipe dream. Or does he?

Better yet, let us ask this veteran diplomat whether Turkey resembles the “old Turkey” that would leave Libya at the snap of the U.S.' proverbial fingers? Why should Turkey leave the Libyan commanders in “the 5+5 Joint Military Commission” alone against the commanders representing not only Haftar but Egypt, the UAE, Greek, Russian and possibly Israeli interests?

Why did your U.N.-recognized schemes fail to unify the country prior to Turkish involvement? Why should Turkey now leave Libya alone when the elections are so close to taking place?

If Libya wins this battle against the EU and U.S., Libyans will have their country back. They have already paid dearly. They don’t have time for the games the Europeans and Americans want to play in a bid to claim a bigger share of the Libyan oil. The whole world knows the beat the U.S. wants to hear from Haftar’s drum.