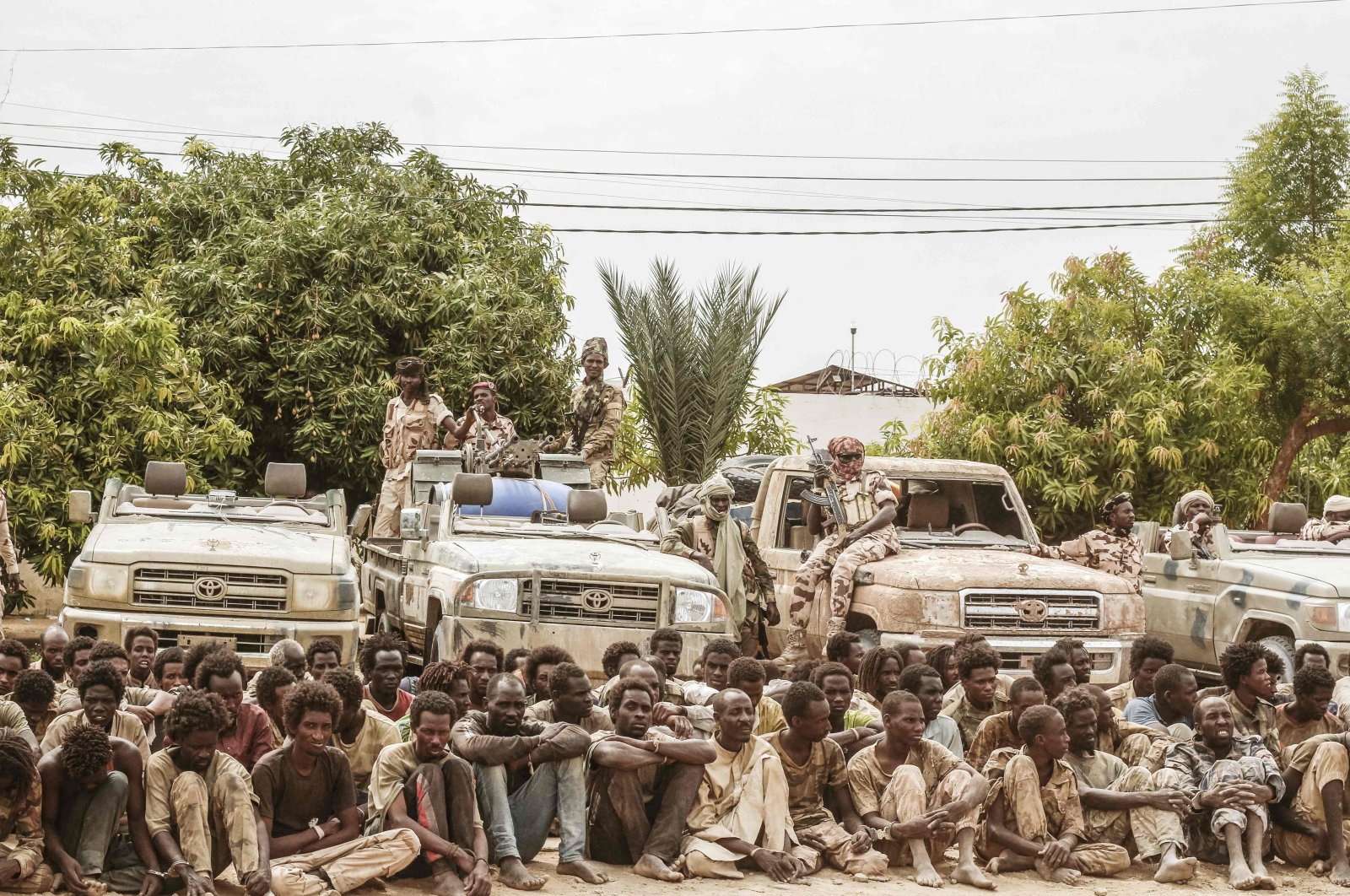 A group of captured rebels from the Front for Change and Concord in Chad (FACT) pose with their confiscated weapons and vehicles at the headquarters of the Chadian Army in N'Djamena, Chad, Central Africa, May 9, 2021. (AFP Photo)
by Betül Usta May 20, 2021 1:04 pm
RECOMMENDED

Mercenaries from the Russian Wagner Group based in war-torn Libya threaten the security and stability of the whole North Africa region, especially the country's neighbors.

Security sources said that Wagner mercenaries have infiltrated neighboring Chad, in addition to disrupting the authority in Libya.

Brought to Libya in support of the eastern-based illegitimate forces loyal to putschist Gen. Khalifa Haftar in their offensive against the United Nations-recognized Government of National Accord (GNA) and its capital Tripoli, Wagner mercenaries have gained threatening power in the country.

In April 2019, Haftar's forces, backed by Egypt, Russia, France and the United Arab Emirates (UAE), launched an offensive to try and capture the capital, Tripoli. Haftar's 14-month campaign collapsed and the fall of Tripoli was prevented after Turkey stepped up its military support of the United Nations-backed government. An October cease-fire agreement that included a demand for all foreign fighters and mercenaries to leave Libya within 90 days led to a deal on the transitional government.

With their advanced technology weapons, Wagner mercenaries now pose a major threat to Chad's stability and security. Chad's interim prime minister, Albert Pahimi Padacke, recently said that mercenaries have benefited from the instability in Libya and are now targeting Chad through infiltrations.

Sources also stated that the Wagner Group is providing weapons to rebels in Chad.

Formed back in 2014 in Ukraine and owned by businessperson Yevgeny Prigozhin, the Wagner Group is intensely involved in several conflicts. The group made its presence most pronounced in Syria and Libya, where Russia actively participated in the civil war and reportedly used the Wagner Group as its proxy in the region.

Chad’s deputy foreign minister also warned the U.N. Security Council Tuesday that mercenaries from Libya are crossing into the Sahel and threatening to undermine progress made in fighting terrorism by five West African nations, which could plunge the region into violence that would be difficult to control.

Oumar Ibn Daoud also said a worsening situation in the Sahel would be harmful to Africa as a whole and could turn the continent into “a battlefield and base for international terrorism.”

The incursion of mercenaries from Libya into Chad that led to last month's death of the Chadian president of three decades, Idriss Deby Itno, “is a perfect illustration of what could happen throughout the Sahel” if appropriate measures aren’t taken by the international community. He said more than 400 people have been killed in attacks in Burkina Faso, Mali and Niger since March.

The U.N. Security Council last month held its first meeting on the risk of mercenaries in Libya dispersing to other countries such as Chad.

The closed-door session was requested by members Kenya, Niger and Tunisia, before the death of Deby, who was injured on the front lines of his country's north, where Chad's army has been fighting Libya-based rebels.

According to diplomats, there are estimated to be "more than 20,000" foreign mercenaries in Libya, whom Libyan authorities, U.N. officials and world powers have demanded they leave.