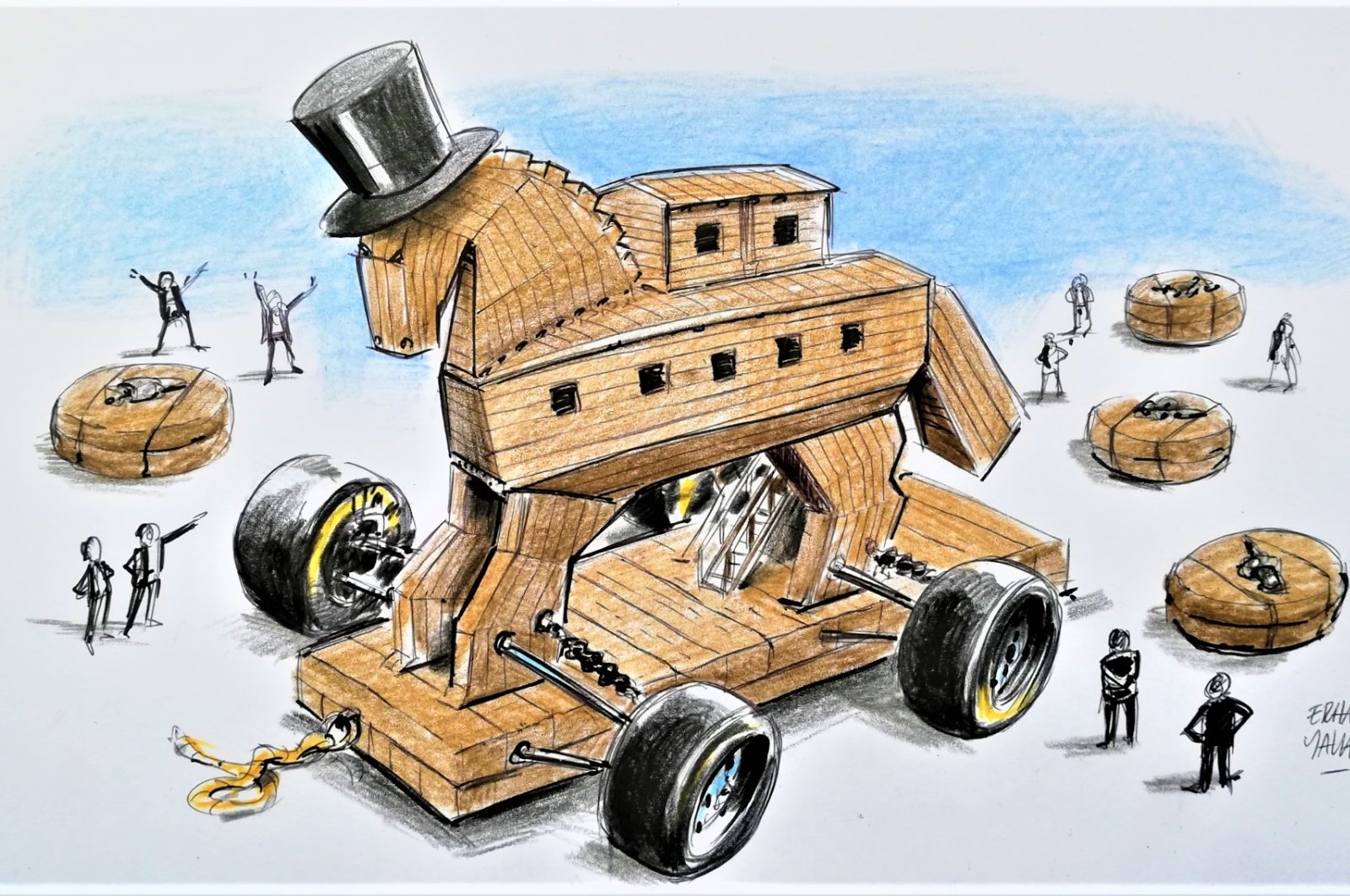 Illustration by Erhan Yalvaç
by Burhanettin Duran Feb 02, 2021 12:05 am
RECOMMENDED

The balance of power between the ruling Justice and Development Party's (AK Party) People’s Alliance and the opposition Nation Alliance will have a defining impact on Turkish politics and Turkey’s 2023 elections. Since all parties are aware of that fact, both sides began to take certain steps shortly after the 2018 election. For the record, they follow similar game plans: They want to consolidate their respective alliances and chip away at the opposing bloc.

The occasional shifts between strongly worded statements and fresh attempts at building bridges are directly related to that equilibrium. It seems that the same thing will keep happening until the next election.

The People’s Alliance treats the Good Party (IP) and the Felicity Party (SP) of the Nation Alliance differently than others. By highlighting the Peoples' Democratic Party's (HDP) extreme views, it reminds the supporters of those parties that their current position is incompatible with their views.

At the same time, repeated calls on those parties to join the People’s Alliance and “come back home” appeal to their leaders as well as voters on the fence between the two camps.

Indeed, the possibility that they could join the People’s Alliance alone makes the IP and the SP more valuable. Being poached by both alliances is an advantage that other parties, like the Democracy and Progress Party (DEVA) and the Future Party (GP), fail to enjoy.

Hence the obvious frustration of pro-GP and pro-DEVA media outlets at the SP’s being invited to join the People’s Alliance. All of a sudden, they began to claim that the SP would sign its own death warrant and its chairperson, Temel Karamollaoğlu, would end his political career if they were to join the pro-government alliance.

Those two parties, which constantly criticize President Recep Tayyip Erdoğan with borrowed arguments from the main opposition Republican People's Party's (CHP) talking points, suffer from a multitude of contradictions. Their spokespeople say that they won’t join any alliance yet because they themselves represent viable alternatives to the current government. Hence, their lack of attempts at forming a third alliance together with the IP and the SP.

At the same time, the GP and DEVA fail to speak a language that distinguishes them from the CHP and the HDP. What they can do is to attack Erdoğan, more severely and in more interesting ways, and to unveil their plans to restore parliamentarism before other opposition parties.

Yet they can’t play ball in the grey area between the two blocs – or launch a third alliance. At least for now, that is a lose-lose situation.

The CHP, the flagship of the Nation Alliance, in turn, bends over backward to keep its direct and indirect allies, and to avoid ending up alone with the HDP. The main opposition party is in frequent contact with the leaders of the IP, the SP, the GP and DEVA.

At the same time, it attempts to transform the push for an “augmented parliamentary system” into a common political platform.

CHP officials also employ radically harsh rhetoric to target Erdoğan and the presidential system of government. (Their attempt to fuel a crisis of legitimacy by referring to Erdoğan as “the so-called president” immediately comes to mind.)

Moreover, they keep talking about early elections to sabotage the presidential system’s consolidation and to keep their allies in line. The main opposition also labels public institutions and public servants as “militants” to feed the perception of authoritarianism.

That radical campaign aims to accomplish more than to make allegations of rape and sexual misconduct, plaguing the CHP organization, disappear.

CHP officials talk about promoting democracy with their “friends” – which hints at an attempt underway to overthrow Turkey’s government. By seeking support from abroad and using particularly harsh words, the main opposition party knowingly fuels polarization in the country.

Uniting the opposition behind the proposed return to parliamentarism, by the way, happens to serve the CHP’s interests at the expense of others. That development would reduce the IP, the SP, the GP and DEVA to second-tier opposition parties.

Overnight, those movements would become ordinary pieces of cloth in a patchwork. In the end, CHP Chairperson Kemal Kılıçdaroğlu would be influential over the opposition’s presidential candidate pick, whereas the rest would fight each other as they try to appeal to the main opposition party.

The center of debate

Without a doubt, the opposition’s most critical move is about driving a wedge between the AK Party and the Nationalist Movement Party (MHP). That’s why the MHP and its chairperson, Devlet Bahçeli, are carefully placed at the center of every single dispute.

Initially, opposition leaders called on the MHP leader to “stop becoming complicit in Erdoğan’s crimes.” Nowadays, they argue instead that Bahçeli calls the shots – a talking point from the GP and DEVA. That new rhetoric serves two purposes: It seeks to lure away the AK Party voters and disseminate the claim that the MHP stands in the way of “reforms.”

Ironically, the push for “reform” and “a new chapter” is endorsed by all parts of the People’s Alliance. It is also clear that reforms must be implemented without undermining the struggle.

The claim that the AK Party will “warm up to the proposed return to parliamentarism” is merely designed to intimidate the MHP. The People’s Alliance, which was born out of the resistance against the July 15, 2016 coup attempt, has a shared responsibility to make the presidential system a success.

In this sense, holding elections on time and improving the Turkish economy’s performance over the next two years are red lines for the People’s Alliance.