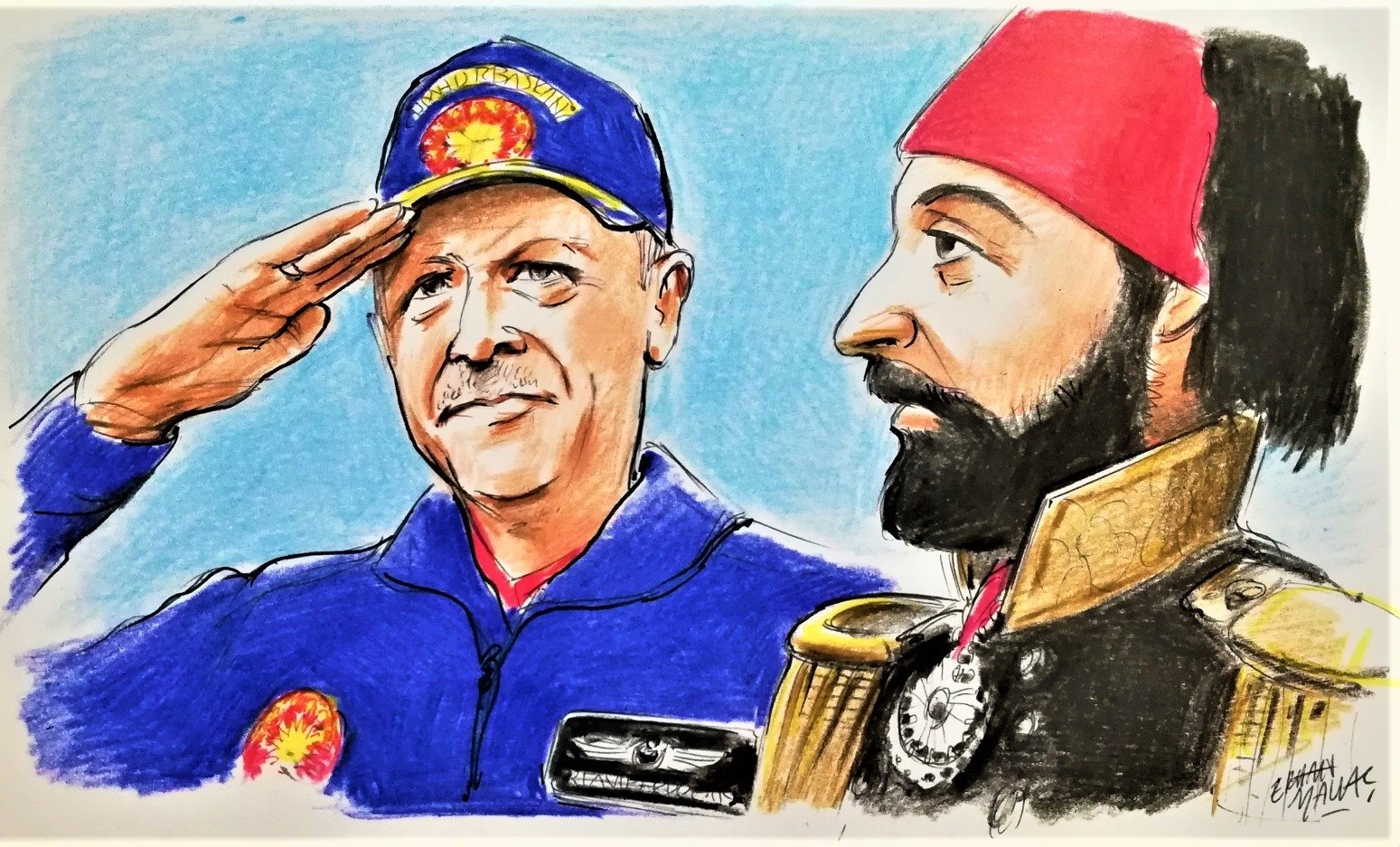 A simple internet search makes it clear that he is portrayed as one of the most authoritarian leaders of the world and for someone who is not familiar with Turkey, the search result is likely to shape their views about the country.

As a result, people around the world would reflect the same perception about Erdoğan when their opinion is sought.

North Korean leader Kim Jong Un's name is not worth mentioning here as he is not in the same league as Erdoğan, Putin and Xi, although he explicitly threatens the U.S. with nuclear attack.

And yet, the media does not attack him as much as they target the Turkish president. I bet that former U.S. President Donald Trump was not smeared more than Erdoğan even though the mainstream media declared war against him during his four years presidency.

Let’s skip the leaders of Iran – the country allegedly seen as the biggest threat in the Middle East. Can you believe that the international media is not wrathful toward the Syrian butcher Bashar Assad – who killed hundreds of thousands of his people in the last 10 years during the civil war – but continue to malign the image of a leader like Erdoğan?

We definitely need a statistical analysis to confirm my argument but, of course, no research center will do it since it will make people question the allegations against Erdoğan.

Nevertheless, Erdoğan is still popular in the Muslim world, from the West to the East, maybe, even more than he is in Turkey. The Muslim world's reactions show that he is not only seen as the Turkish president but the leader the Muslim world needs.

As I discussed in my last two columns, it would not be wrong to say that the anti-Erdoğan campaign of the media boomeranged back at his accusers. You can listen to the people who portray him as a Muslim leader in history such as "Saladin on the Arab streets," for instance.

In addition, the allegations that Erdoğan harbors “neo-Ottomanism” dreams have also backfired.

People have become accustomed to hearing the word “Ottomans” once again after the never-ending usage of the term in recent years. People whose ancestors lived on the lands ruled by the Ottoman Empire are now quite attracted to Turkish TV dramas, movies, books and articles about the history of the Ottomans. That shows that Erdoğan admirers view the Ottoman Empire favorably, ignoring propaganda efforts depicting the Ottoman era as a dark age.

If the “neo-Ottomanism” claims against Erdoğan continue, I think an “Ottomania” will start and spread among Erdoğan admirers, some of whom refer to him as the successor to successful sultans of the empire and compare him with them, specifically Abdulhamid.

Of course, Erdoğan can be compared to Abdulhamid, if we take into consideration that they share the same intelligence, sharp memory and articulate speech.

Also, both implemented many reforms in many fields ranging from military, education, transportation, communication, health and social life to cooperation and the projects they undertook.

Likewise, the cooperation between then Committee of Union and Progress (İttihat ve Terakki) and Britain targeting Abdulhamid, which paved the way for the March 30 rebellion in 1909 and ultimately resulted in the dethronement of the sultan, is similar to Erdoğan’s wrestle against the allied anti-Erdoğan circles within and outside Turkey.

Muslims love Abdulhamid as he refused to sell the Palestinian lands to a newly founded Zionist movement, supported by Britain, in exchange for paying off all of the foreign debts of the empire, which were in hard times then.

While the Muslims call him the "Great Khan,” the Westerners portray him as an evil ruler, giving him nicknames like “the Red Sultan” or the “Bloody Sultan.” This is also one of the similarities between Erdoğan and Abdulhamid as the Muslim world likes him while most of the rest hate him.

Abdulhamid was dethroned and was kept under house arrest until his death. However, Erdoğan survived numerous attempts to overthrow him including the 2016 coup attempt by the Gülenist Terror Group (FETÖ), which had been working as a parallel structure inside the Turkish state in order to take the place of the old “establishment,” which is also called the “military tutelage.”

Since Erdoğan won his fights against both the “old guards” of Turkey and FETÖ, I think he is similar to Sultan Mahmut II, if we compare him with the rulers of the Ottoman Empire.

Indeed, most of Erdoğan’s characteristics, reforms, struggles against insider threats, regional challenges and counter-strategies remind me of the era of Sultan Mahmud II.

Following the horrific incidents that started after the Janissaries – the main elite unit of the Ottoman army – deposed and imprisoned Sultan Selim III, who was subsequently killed by a group of assassins, and the nerve-racking days under death threat during the one year rule of Mustafa IV, Mahmud II ascended to the throne in 1808.

Sultan Mahmud gave him the position of the grand vizier and a broad authority to Alemdar Mustafa Pasha, the “ayan” (provincial notable) of Ruse (Rusçuk) and the strongest of the ayans of this time, who saved his life and helped him reach the throne.

Mahmud II asked the pasha to solve the problems with the ayans, which weakened the central governance of the empire and caused inner conflicts in the state.

Consequently, a “Charter of Alliance” was signed with Rumelian and Anatolian ayans, who gathered in Istanbul to assure that they would obey the state’s rulings.

In a short while, Mahmud II founded the “Sekban-ı Djedid” army in order to revive the Nizam-ı Djedid army, which was established by Selim III, and transition into the regular army. It was abolished after the beginning of the “Kabakçı Mustafa Pasha” rebellion by the Janissaries.

The Janissaries were an elite infantry unit that was formed in the 14th century as the first modern standing army in Europe. The Janissaries fought in all major campaigns of the empire, including the fall of Constantinople, led by Sultan Mehmed the “Conqueror” in 1453.

They were always led by the sultan himself. However, by the early 17th century, they started to see their importance as an opportunity to have more prestige and influence including dominating the government. In time, they got the power to change the sultans through palace coups.

Sultan Mahmud’s attempt to create the Sekban-ı Djedid army failed as the Janissaries revolted just like they did after Selim III’s decision to form the Nizam-ı Djedid army.

Alemdar Mustafa Pasha was killed during the Janissaries' revolt. Due to many outbreaks of fire and lootings in Istanbul, Mahmud II had to abolish the Sekban-ı Djedid, but he couldn’t be dethroned.

After the pasha was killed, the Rumelian and Anatolian ayans violated the Charter of Alliance.

In order to spread the authority of the empire to all its lands, Mahmud II first officially ended the Charter of Alliance and started an extensive campaign against the ayans. Eventually, he established the state authority in Rumelia and Anatolia.

Meanwhile, despite his backstep, Mahmud II did not give up his plan to abolish the Janissaries. It was impossible to make reforms and start new projects while the Janissaries had the ultimate authoritative position.

In fact, the Janissaries became a state within the state. As a result, after 17 years of waiting, Mahmud II put his plan into effect. He first established a new military class called "Eşinci Ocağı.”

As soon as the corps of Eşkinci Ocağı started to train, the Janissaries started a rebellion again. What was surprising for them then was the decisive attitude of Mahmud II.

He gathered the scholars respected by the people and took the holy flag used during the wars of the Prophet Muhammad (Sancak-ı Şerif) in his hand. He called all the people to resist the Janissaries.

The people of Istanbul started gathering under the holy flag. New corps also joined the fight against the Janissaries who did not surrender. Not only them but also Rumelian and Anatolian ayans also came to Istanbul bringing their corps for help.

At the end of the day, all the soldiers except the Janissaries declared their allegiance to the sultan. Right after the defeat of the Janissaries, a new army was established: Asakir-i Mansure-i Muhammediyye (the Victorious Soldiers of Muhammad). The whole incident was recorded in history as “Vaka-i Hayriye,” which means the "Auspicious Incident."

To sum up, Mahmud II waited 17 years to abolish the Janissaries. In the meantime, he set his authority over the ayans to strengthen the central governance.

When he was sure that he could confront the Janissaries who acted as a parallel state just like FETÖ members did for years in modern Turkey, he got support from all the segments of people in the Empire and succeeded in his plan to abolish the Janissaries.

Mahmud II reminds me of the successes of Erdoğan who struggled against the old establishment of Turkey and then FETÖ's parallel structure.

As is known, Erdoğan initiated Turkey's rise after a long period of turbulence in Turkish politics with his patience and good strategies to defeat his enemies as well as his reforms and initiatives to make Turkey a regional power. And it looks like he has been very successful so far.