If not against coups, then when? 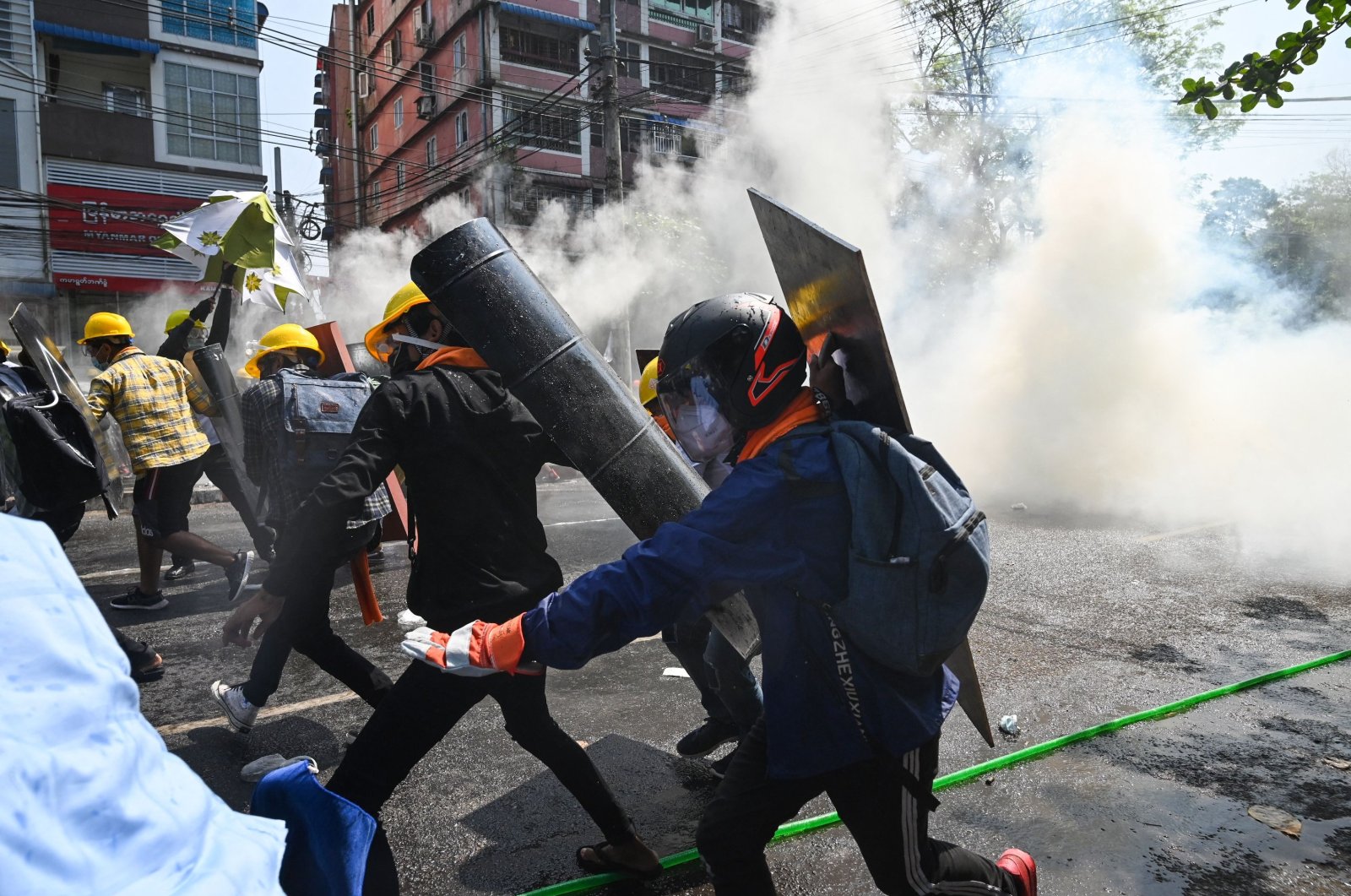 Protesters run while holding homemade shields after tear gas was fired during a demonstration against the military coup in Yangon, Myanmar, March 1, 2021. (AFP Photo)
by Kılıç Buğra Kanat
Mar 02, 2021 12:05 am

This week is the 24th anniversary of the Feb. 28 military intervention in Turkish politics, when the Turkish Armed Forces (TSK) organized a “post-modern coup” against the democratically elected Turkish government.

Later, the coup perpetrators stated that the coup was a post-modern one because the military mobilized some other institutions, including the media, against the government.

Today, this intervention is remembered as one of the darkest moments of the history of Turkish democracy. Although the generals, who organized the coup, once said that the Feb. 28 process would continue for the next "1,000 years," the Turkish public reacted to the coup during the elections and ended the process.

In the last month alone in two different countries, we have seen military intervention in politics. In the first days of February in Myanmar, known in recent years for its egregious human rights violations against Rohingya Muslims, the military overthrew the elected government of Aung San Suu Kyi.

The deposed prime minister was put on house arrest, and the military declared a yearlong state of emergency in the country.

Later the military also declared the previous election that brought Suu Kyi to power was invalid. This was not the first time the military intervened in politics in Myanmar; however, this time the intervention generated huge public reactions from the people in Myanmar.

Despite the heavy-handed police response against the demonstrators, there is no sign of stopping these demonstrations.

While the discussion on the military intervention in Myanmar is still fresh in the international community, news broke that in Armenia as there was an attempt by the military to overthrow the government.

Although initially there was confusion about the developments in the country, it was soon revealed that the military in the country asked for the resignation of Prime Minister Nikol Pashinian.

Pashinian made a statement through his Facebook account and said that he considers the statement of the general staff as an attempt at a military coup. He also asked his supporters to join him in the main square of the Armenian capital in order to respond to the calls from the military.

In both countries, the situation is still unstable. There is a fear of increasing military crackdown in Myanmar due to the rising number of protests in the country.

In Armenia, there is still a lot of uncertainty about the potential developments in the next few days.

However, the developments in both countries demonstrated that the coups are not a page from history. Some elements within the military continue to violate the norms of active civilian control of the military and attempt to gain control of the government by overthrowing the democratically elected governments.

The international community has so far failed to respond to these military interventions from a principled position.

In 2013, the U.S. failed to call the coup in Egypt a coup, and then-U.S. Secretary of State John Kerry called it a “restoration of democracy” by the military.

In the Myanmar coup, we again see an inconsistent attitude. This time, China and Russia blocked a U.N. resolution condemning the coup at the U.N. Security Council (UNSC).

This pattern in reaction to the coup will not bring any good for the nascent democracies and will be interpreted as a green light by some ambitious generals in the world.

If this position will continue, we will continue to see coups not as part of history but in the current news of the newspapers.