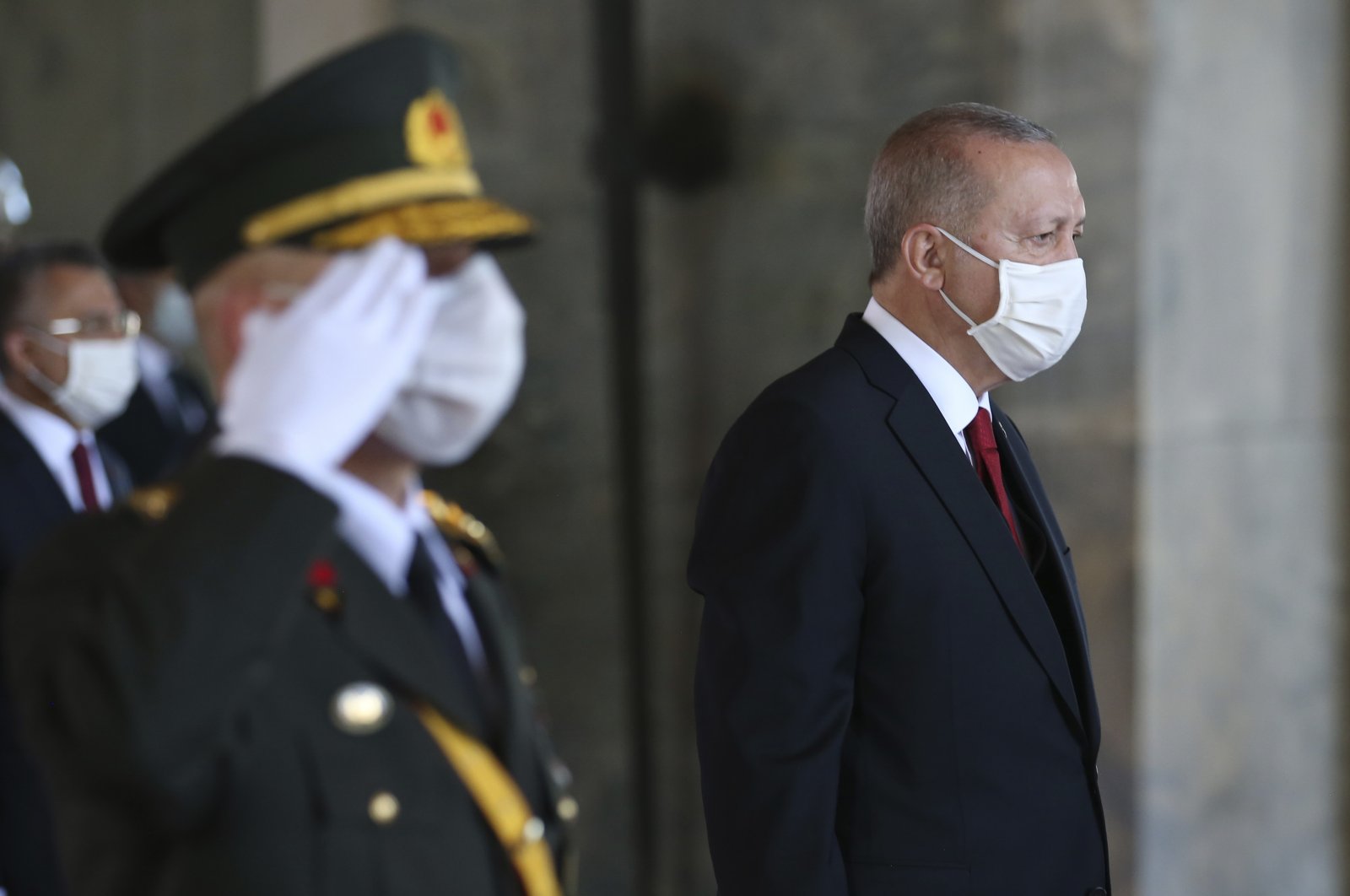 President Recep Tayyip Erdoğan (R) stands with a general during a ceremony at the mausoleum of Mustafa Kemal Atatürk, founder of the Republic of Turkey, in Ankara, Turkey, Aug. 30, 2020. (AP Photo)
by Burhanettin Duran Apr 10, 2021 12:05 am
RECOMMENDED

Everyone responded to the coup-tinted declaration of 104 retired admirals the way I predicted on the state broadcaster TRT’s weekly current affairs show the following morning.

The main Republican People’s Party (CHP) hardly surprised anyone by talking about freedom of expression, complaining about a faux debate and mocking critics by asking whether retired soldiers could seriously stage a coup.

In addition to the CHP’s response, it was the involvement of several CHP members in the declaration that encouraged President Recep Tayyip Erdoğan to position the CHP at the heart of the problem.

Issuing a stern warning to supporters of Turkey’s long tradition of coup plots, the president expressed support for the Turkish Armed Forces (TSK) to make a distinction between that institution and some of its former members.

He clearly understood that the group of retired admirals primarily sought to drive a wedge between the military’s commanders and its lower ranks.

Erdoğan wanted to make sure that the TSK, which defends Turkish interests in Syria, Iraq, Libya and the Eastern Mediterranean, was not demoralized by the most recent developments.

The CHP chairperson’s argument that retired military officers were simply not capable of perpetrating a coup, in fact, is hardly coherent. Speaking to the Turkish Sabah newspaper, professor Cemil Koçak pointed out that retired soldiers have been behind coup plots throughout the country’s history.

Let us not, however, underestimate the importance of support from politicians, intellectuals and the business community. As such, many social groups, including the main opposition party, failed the test of democracy yet again.

The declaration’s reference to the "reactionary threat" was veiled with a certain phrase: “The drift away from the Kemalist principles and reforms.” Will the people really believe that the TSK succumbed to reactionaries because one admiral was pictured wearing religious headgear? The answer is clearly negative.

Disregard the accusation that the Justice and Development Party (AK Party) built a “party-state.” Despite being a mass party and having governed for 19 years, the movement has fewer people within the state apparatus than others.

The idea that the construction of the Kanal Istanbul project will undermine the Montreux Convention, which gives Turkey control over the Bosporus and the Dardanelles, was the main source of fear behind the retired admirals’ declaration. An earlier statement by 126 retired ambassadors, too, reflected the same concern.

Why would both declarations, which appeal to the concerns of Kemalists and secularists, attempt to fuel the same fears, which have been shown to be completely baseless? In my opinion, their insistence was closely linked to two issues.

Moreover, they are afraid of the challenges that the great power competition between the U.S., the EU, China and Russia entail. For some reason, they do not think that Turkey could play an active role in this environment.

In other words, the Kemalist elite, who falsely assume that Turkish interests can be defended by settling for a low-ranking position within the Western alliance, are afraid of risks and threats in the emerging world order. They do not believe in a policy of balance.

The Eurasianist admirals, in turn, represent the opposite side of the coin. They, too, maintain that Ankara cannot afford strategic autonomy.

In truth, we have witnessed the downsides of isolationism, repeatedly, since the 2010 Arab revolts. Turkey’s delayed intervention in Syria resulted in the influx of millions of refugees and the emergence of a "terror corridor" under PKK/YPG control. Moreover, Ankara had disagreements with Russia and the U.S.

Turkey’s accomplishments in Nagorno-Karabakh and Libya, in contrast, attested to the merits of a proactive policy.

Turkey's Western allies – the U.S. and the EU, which abandoned Ankara in Syria – are the main reason behind the deterioration of Turkey’s relations with them.

As the most recent EU summit established, European leaders do not see Ankara as a partner or a candidate country. Instead, Turkey is perceived as a neighbor. Washington, too, lacks a new policy on Turkey.

Nor is there another bloc, led by China or Russia, that Turkey can join.

Turkey cannot run away from crises in its neighborhood to defend its interests. It must play an active role in the great power competition.

Of course, the country may not be able to assume a primary role in the Indo-Pacific region. It has the opportunity and capabilities to become an active player in Africa, Europe, the Mediterranean, the Black Sea, the Gulf, the Caucasus and Central Asia.