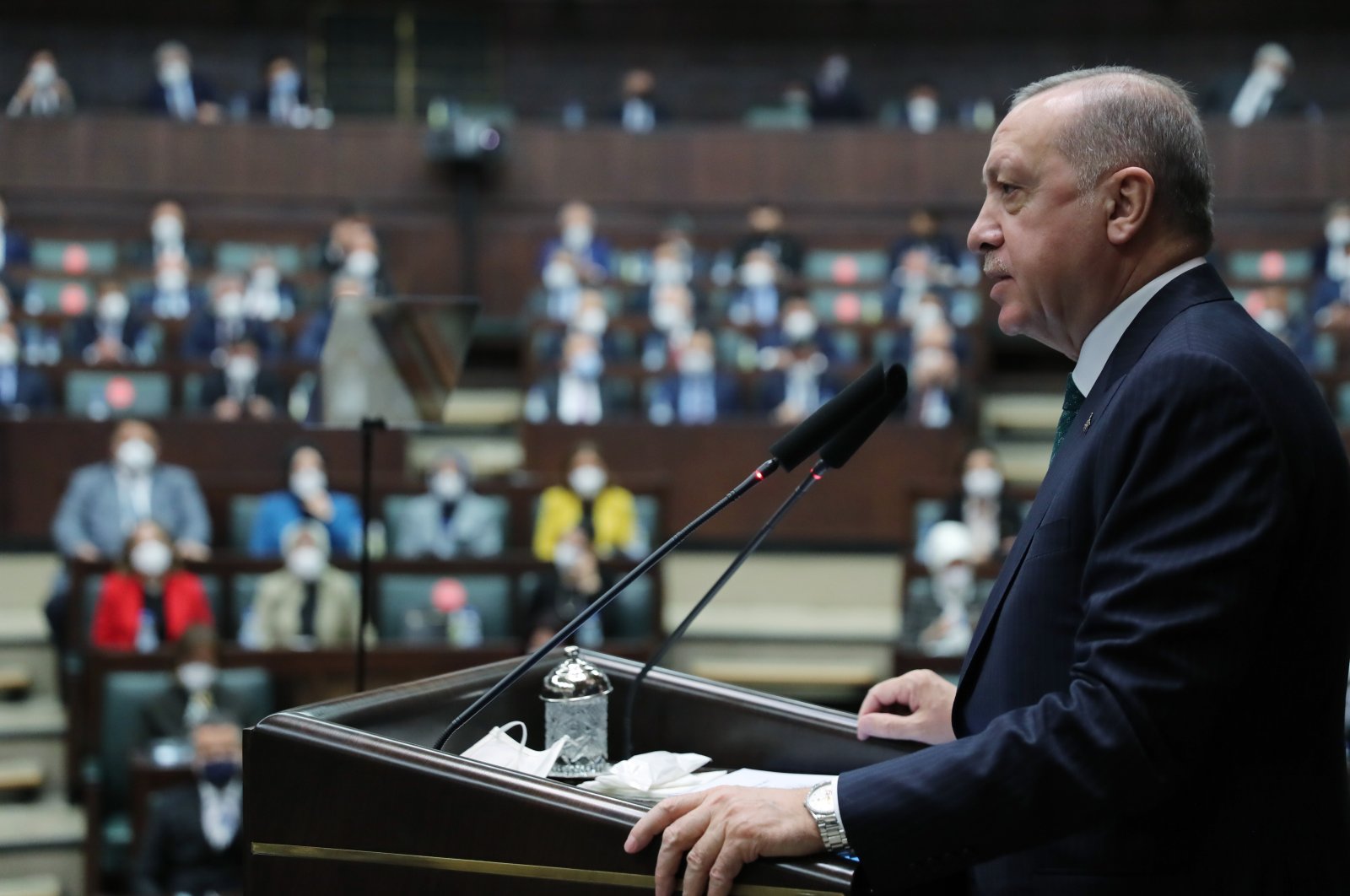 Late Saturday, 104 retired navy admirals signed a "declaration" warning the government to keep its commitment to the Montreux Convention and abandon plans to build a new canal in Istanbul.

"The CHP is trying to whitewash this declaration that has coup sentiments. CHP is at the very center of these retired admirals. And there are CHP members among them," Erdoğan said during an address to ruling Justice and Development Party (AK Party) lawmakers at the Parliament in the capital Ankara.

After Turkey’s decision last month to withdraw from the Istanbul Convention, a European treaty aimed at preventing and combating violence against women, with a presidential decree, it came into question whether Turkey could withdraw from other international agreements the same way. In a TV interview, Parliament Speaker Mustafa Şentop, who is also a lawyer, said that technically it is possible and gave the example of the Montreux Convention Regarding the Regime of the Straits.

Following discussions about Şentop’s statements, 104 retired admirals on Saturday released a statement warning the government. “We are of the opinion to refrain from any kind of rhetoric or action that could make the Montreux Convention ... a matter of controversy,” they said. The Montreux Convention is a 1936 agreement that gives Turkey control over the Bosporus and Dardanelles and regulates the transit of naval warships. The convention guarantees the free passage of civilian vessels in times of peace and restricts the passage of naval ships that do not belong to littoral Black Sea states.

The Treaty of Lausanne – which was signed between Turkey and World War I allies Britain, France, Italy, Japan, Greece, and Romania in 1923 – ended the Turkish War of Independence and scrapped the humiliating Treaty of Sevres imposed upon the Ottoman government after its defeat and determined Turkey’s new borders.

"What coup are you talking about? Where on earth have the retired people organized a coup? These (the government) has lost its mind," said Kılıçdaroğlu.

However, the CHP head seems to be alone in his opinion on the issue, as the declaration has drawn a strong reaction from officials and the public who say it implies interference in democratic institutions and public will.

Speaking at the Good Party's (IP) parliamentary group meeting on Wednesday, the party head Meral Akşener warned that such declarations would only cause Turkey more harm.

"Now, there is the trend of making headlines at midnight. Whoever becomes unable to sleep starts to work on how to create a disruption. Unfortunately, paying the costs of such actions becomes the duty of our nation each time. The 104 admirals' declaration is the most recent example of this trend," she underlined.

Earlier, Nationalist Movement Party (MHP) leader Devlet Bahçeli on Tuesday called the admirals' declaration a call for a coup, adding that the statement targeted democracy and the national will. Speaking during a party meeting in the capital Ankara, Bahçeli referred to the declaration as a black stain on the history of Turkish democracy. "Clearing this stain is the honor of democracy, law, and national will against history," he said. The MHP leader suggested that the admirals had committed a crime by releasing the statement, declaring, "This crime cannot and will not go unpunished." Bahçeli said it was a call for a coup. "This statement violates the law, and (it's) a weapon directed at the national will."

In another statement, National Defense Minister Hulusi Akar called the admirals behind the declaration malevolent and warned that they would pay for what they had done.

"The Turkish Armed Forces cannot be used to fulfill the ambitions of irresponsible people,” he underlined.

“They should have known what they did would lead to,” Akar further emphasized.