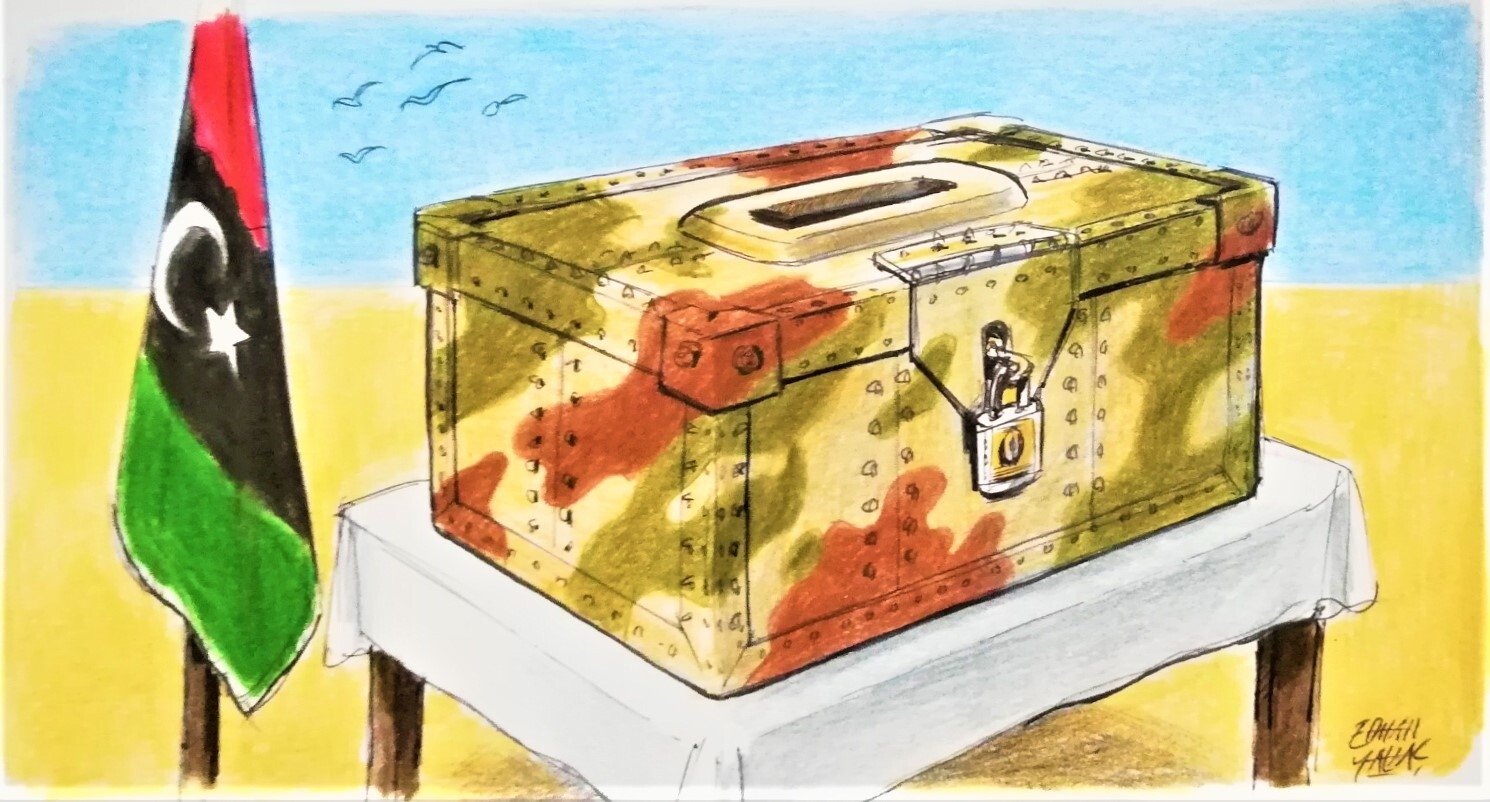 Illustration of a Libyan flag and ballot box symbolizing the country’s December 2021 elections by Erhan Yalvaç.
by Talha Köse Aug 13, 2021 12:05 am

The Libya Political Dialogue Forum (LPDF) road map proposed guidelines to remain in place until the December 2021 elections, which it authorized the Government of National Unity (GNU) to hold. By July 1, the LPDF was supposed to reach a consensus on the constitutional basis of the elections and adopt a new election law. But no agreement was reached at the United Nations Support Mission in Libya (UNSMIL) facilitated meeting in Geneva at the end of June.

Disagreements over the timing and constitutional basis of the elections are a significant obstacle to reaching the polls scheduled for the end of the year. Under the current circumstances, holding elections on Dec. 24 seems unlikely.

There is still significant disagreement on the scope of the elections, too. Some actors want parliamentary polls, while others want both legislative and presidential elections on Dec. 24. The divergences among LPDF members entertain and stimulate those looking to spoil the democratic political transition in the country. Those "spoilers" have become more visible and vocal in the international media as well.

Even if the GNU manages to hold elections in December, a rapid transition to political stability is unlikely. Post-election violence and bloodshed are the expected outcomes if Libya's key local stakeholders fail to reach a consensus before the election process begins. The rifts and competitions amongst the critical enthusiasts of the elections are still visible. All actors are trying to form stronger political coalitions that may also appeal to international actors.

The opponents of the elections and a democratic political transition in the country, on the other hand, have become more vocal about their criticisms of the Government of National Unity (GNU). So far, Prime Minister Abdul Hamid Mohammed Dbeibah and his cabinet have tried to strengthen political contacts with Libyan political actors and succeeded in distributive efforts.

Opposition to the GNU is also against the election process in the country. Dbeibah demonstrates his political skills and maneuvers to convince both local actors within Libya and international actors that he can lead the country with an inclusive framework.

Still, there is visible discord within his cabinet. No matter how successfully the GNU provides essential services and governs the country, without a functioning security apparatus that is loyal to the elected government, it will be vulnerable to the pressures of local and international spoilers. Actors who are aware of the GNU's vulnerabilities want to exploit the entire process.

Putschist Gen. Khalifa Haftar already declared that his forces would not operate under any state authority even after the elections or the formation of a new government. Haftar also challenged the authority and the legitimacy of GNU and Libya's Presidential Council.

These signals make the already tricky road map to the December elections even more complex and discourage actors in the country's east from getting involved in the election process. Haftar is betting on post-election instability and violence, expecting to play a more significant role in the post-election power struggle in the country.

If the election process is delayed due to disagreements among the factions, then he will question the legitimacy of the GNU. Putschist Haftar may make another move to strengthen his military control in the country.

Haftar and his international sponsors’ current efforts attempt to weaken and delegitimize the entire election process. They are looking forward to stepping ahead and saying that “we told you that the democratic process and elections would not bring stability to the country.” They will do their best to confirm their self-fulfilling prophecy.

Some Western political actors continue their back-channel diplomacy and signal that they will support Haftar if the political configuration after the elections contradicts their preferred outcomes.

Plan A or B

Plan A is a long and tiresome process to carry out a democratic political transition with some form of national consensus. It already seems that everyone is invested in Plan B rather than Plan A. Libyan local actors are mature enough to pursue the goal of Plan A.

Still, there are already extreme domestic and international spoilers who want to benefit from the persistent fragmentation and chaos in the country.

As the elections draw near, all actors are preparing their alternative Plan B scenarios rather than investing further in Plan A. International stakeholders play critical roles in the recent cacophony in Libya.

The United Arab Emirates (UAE) and Egypt’s skepticism about the elections and GNU is not secret. While they are trying to increase their influence within the GNU, they also try their best to reduce the significance of the elections in the political transition in the country.

One key element that makes the agreement difficult for the opponents of democratic transition in Libya is that they all have different Plan Bs that contradict one another.

As we inch closer to the elections, the gaps between the alternative game plans will not narrow. Skeptics of the democratic political order in Libya are preparing to accept and sponsor a technocratic and dysfunctional government in Libya that only performs key security and redistribution functions.

However, they also expect the government to stand closer to their preferred policy lines. After the decline of Muslim Brotherhood-affiliated actors in the region, the shared sense of being under threat has waned. It is, therefore, more challenging to bring the actors that previously supported the Haftar project together around a similar plan in the medium term.

Very little constructive change is likely to come of the elections unless the significant power holders in the country commit to the LPDF road map. There are already coalitions emerging that defy the polls.

As long as the local and international stakeholders continue their power play and competition, the foreign mercenaries will strengthen their presence in the country.

No matter the outcome of the upcoming elections, there should be a consensus on the validity and legitimacy of the polls. The international actors who supported and sponsored the 2013 coup in Egypt and the recent coup in Tunisia are also committed to spoiling the delicate democratic transition in Libya.

The political dialogue and balance of power among the local political stakeholders are already fragile, and external signals further the possibility of deterioration.

It should be a fundamental priority for all the actors that want a democratic political system in Libya to narrow down their differences and pay special attention to strengthening the legitimacy of the election process. That is the only way to defeat the competing Plan B scenarios that threaten to lead the country to political uncertainty and chaos.