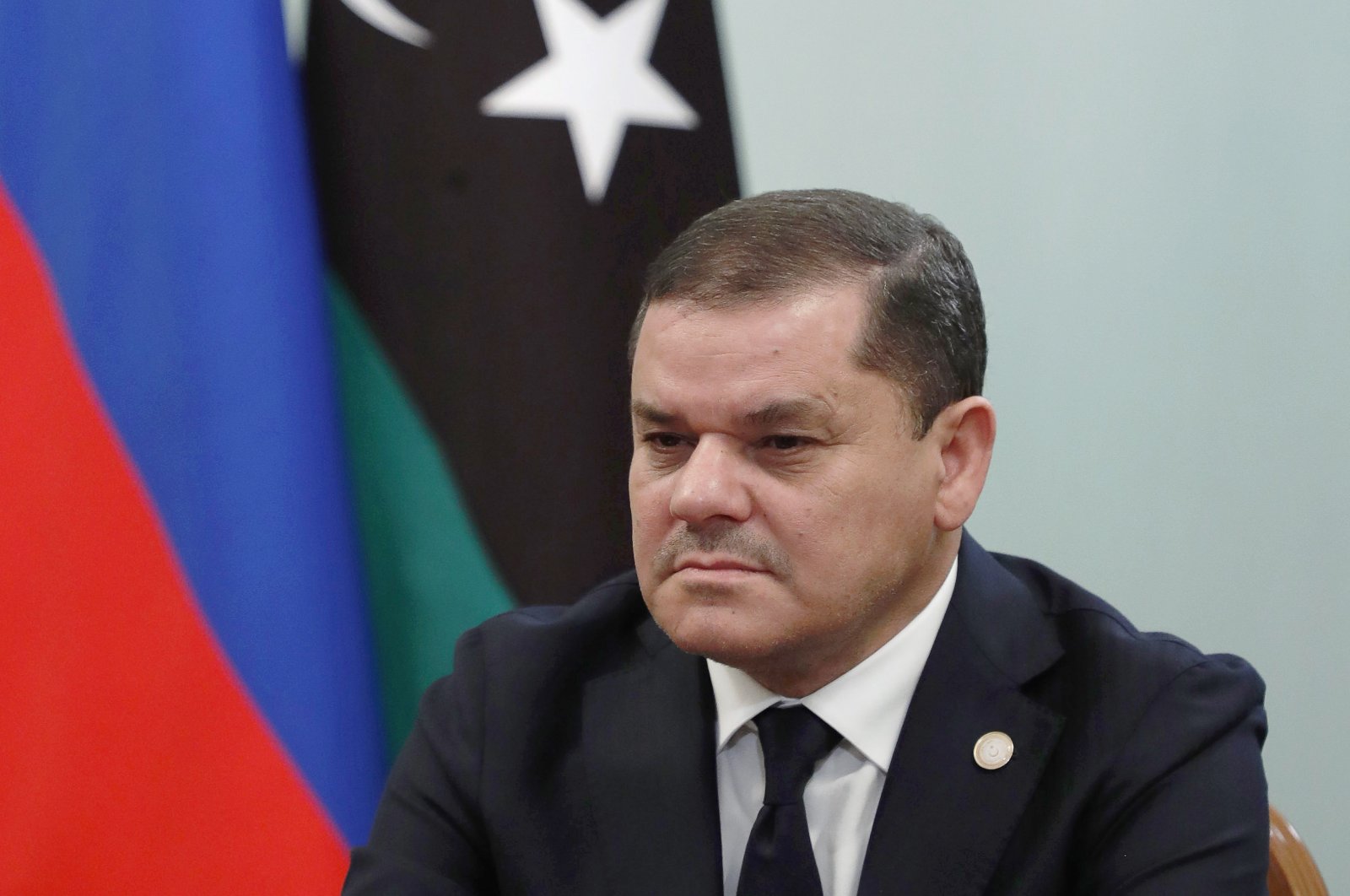 Prime Minister of the Libyan Government of National Unity Abdul Hamid Mohammed Dbeibah takes part in a meeting with Russia's Prime Minister Mikhail Mishustin (not pictured) at the House of the Government of the Russian Federation in Moscow, Russia, April 15, 2021 (Getty Images)
by Dilara Aslan
Apr 30, 2021 12:58 pm

Sources told Daily Sabah that the Haftar militia by blocking the prime minister’s visit to their stronghold clearly showed that the warlord does not endorse Dbeibah, contrary to what he said after the elections.

Dbeibah was appointed in March to lead the new Government of National Unity (GNU) through a United Nations-facilitated process, aimed at bringing peace and stability to Libya through overseeing the reunification of state institutions and an election in December.

In February, Haftar stated his backing of the new transitional authorities and his support for a “peaceful and democratic alternation of power” in Libya, according to a statement released by his office. He had welcomed the appointment of the new government, hailing its leaders as “national figures.”

Dbeibah, together with ministers, was about to depart from Mitiga Airport in the capital Tripoli late Sunday to visit Benghazi. He was expected to hold a Cabinet meeting in the province, visit several institutions and regions, as well as examine the condition of places damaged by the country's civil war, but had to postpone the visit.

Dbeibah's visit to Benghazi on Monday would have been the first by a Tripoli-based prime minister in years, a moment intended to encapsulate a rare opportunity to end the conflict.

“We can say the war ended, yet there are some that want to ignite it again,” Dbeibah said Friday during a visit to Tajoura, east of the capital, adding that foreign mercenaries continue to pose a threat to Libya’s stability.

East and west sides formed rival administrations in 2014, further dividing a country already beset by the chaos and violence that followed the 2011 NATO-backed uprising against former dictator Moammar Gadhafi.

Last week, Dbeibah met displaced people in Tripoli who had fled Benghazi and his reported comments to them angered factions in the east. Moreover, Haftar's militia on Wednesday demanded an apology from Dbeibah for his recent remarks on Benghazi.

In a statement broadcast by the pro-Haftar Libya Al-Hadath TV channel, the militia – which calls itself the "General Command of the Libyan Arab Armed Forces" – said it "has received hundreds of requests from various segments of society and from all tribes and families of the martyrs and the wounded that the Prime Minister, Mr. Abdul Hamid Dbeibah, must present an explicit and clear apology for what happened when he mentioned last week that Benghazi will return to the homeland."

Haftar continues to operate independently from the legitimate government and continues to lead armed militias, calling himself the "Commander in Chief of the Libyan Army.”

Sources further added that Egypt, the United Arab Emirates (UAE) and Saudi Arabia decreased their support for the warlord while increasingly backing Abdel Raziq al-Naduri, a senior commander in what Haftar calls the "Libyan National Army."

Widespread reports of Haftar’s war crimes, his potential role in the mass graves discovered in Tarhuna, the defeat in Tripoli and al-Naduri as a rival, all indicate the slow decline of the warlord, sources pointed out.

In April 2019, east-based Haftar and his forces – backed by Egypt, Russia, France and the UAE – launched an offensive to try and capture Tripoli. His 14-month campaign collapsed after Turkey stepped up its military support of the U.N.-backed government.

Apart from blocking the visit of Dbeibah to Benghazi, Haftar has also been working with the Wagner group, which is planning to send 300 Syrian militia to Benghazi, to prevent losing his grip on the country.

Meanwhile, the U.N. Security Council held an informal meeting Thursday focusing on the repatriation of more than 20,000 foreign fighters and mercenaries from Libya, a demand of the country’s transitional government as it heads toward December elections after a decade of fighting and upheaval.

The U.N. estimated in December that there were at least 20,000 foreign fighters and mercenaries in Libya, including Syrians, Russians, Sudanese and Chadians. But council diplomats said speakers Thursday said there were more than 20,000, including 13,000 Syrians and 11,000 Sudanese.

The diplomats, speaking to the Associated Press (AP) on condition of anonymity because the informal meeting was closed, said all 15 council nations agreed that getting the foreign fighters and mercenaries to go home was the only way forward. But some council members pointed out that other council members in the room were behind some of those foreign fighters or mercenaries, they said.

The United States and the United Kingdom singled out mercenaries from the Wagner Group, a Kremlin-backed private security company that has been implicated by U.N. experts monitoring sanctions against Libya for fighting on the side of Haftar’s eastern-backed forces, the diplomats said. Russia has repeatedly denied playing any role on Libya’s battlefields.

Diplomats said Russia responded Thursday saying it had voted for the Security Council resolution adopted unanimously on April 16 that authorized up to 60 U.N. monitors to help implement the cease-fire agreement. It called for full implementation of last October's cease-fire agreement, “including through the withdrawal of all foreign forces and mercenaries from Libya without delay.”

Thursday’s informal council meeting was called by its three African members – Niger, Tunisia and Kenya – and heard from the new U.N. special envoy, Jan Kubis, on ways to get foreign fighters and mercenaries out of Libya and enforce the decade-long arms embargo against the country, the diplomats said. A recently released report by U.N. experts said the embargo has been “totally ineffective.”

The council was also briefed by Assistant Secretary-General and Mission Coordinator of the United Nations Support Mission in Libya (UNSMIL) Raisedon Zenenga, who talked about the process of getting Libya’s disparate security and military forces across the country in one place and starting disarmament, demobilization and reintegration process, another diplomat said, stressing that this is just as important as getting foreign fighters and mercenaries out of the country.

The meeting took place following last week’s killing of Chad’s President Idriss Deby Itno by rebels, believed to have been armed and trained in Libya, a neighboring nation.

Dispersal of the mercenaries could represent a new risk for the region. Forcing the fighters from Libya could have an "impact" on security in the rest of the Sahel, said another diplomat, speaking anonymously to Agence France-Presse (AFP).

"Without good control, without effective support, what happened in Chad could repeat itself again in this country or it could extend from the Sahel to the Horn of Africa, to Sudan, to South Sudan, to Niger, Ethiopia, the Central African Republic, to Mozambique," a diplomat said.