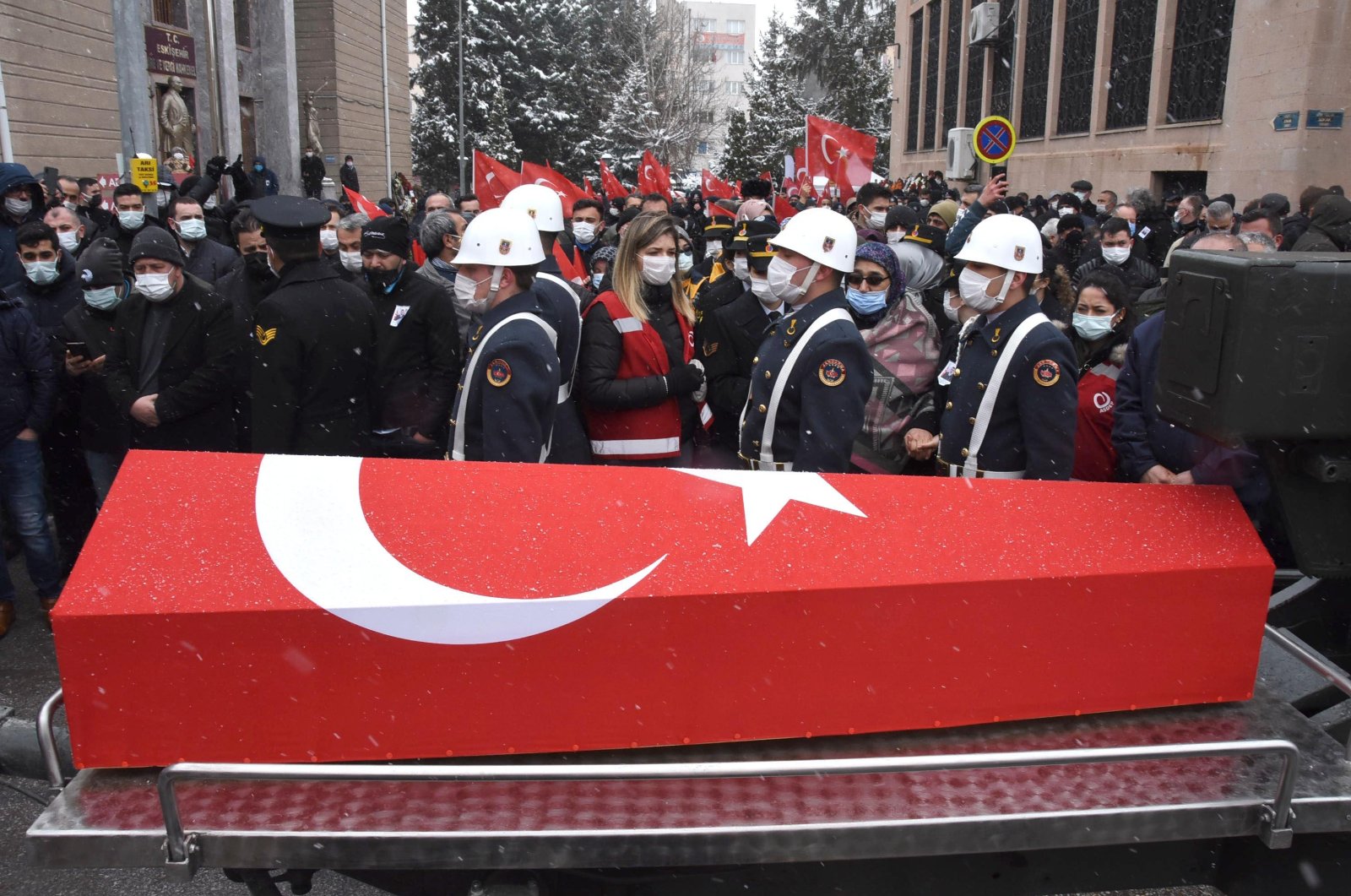 A funeral ceremony is held for the Gendarmerie Specialized Sgt. Mevlüt Kahveci who was executed by PKK terrorists in the Gara region of northern Iraq, Feb.18, 2021. (DHA Photo)
by Melih Altınok Feb 25, 2021 12:05 am

The Gara terrorist attack is the latest incident proving that Turkey is the target of not only the PKK but also its sympathizers, both at home and abroad

On Feb. 10, the Turkish Armed Forces (TSK) launched an operation in Gara, northern Iraq, designed to rescue 13 Turkish citizens held hostage by the PKK and its Syrian offshoot, the YPG, for six years.

However, once the operation was over, it was revealed that the PKK had executed the hostages one by one in a cave.

The act does not come as a surprise given the track record of the PKK and the YPG, who over the last four decades have been responsible for the deaths of over 50,000 people in Turkey alone.

The PKK is a terrorist organization that blew up a student dormitory, killed babies, targeted ambulances and is notoriously known to place bombs in parks at the heart of cities.

Many states officially recognize the PKK as a terrorist organization.

However, while trying to establish new relationships with the United States and European countries through the YPG, the PKK tried to make this latest massacre, reminiscent of something Daesh would do, look like an accident.

Since the Turkish state had strong evidence that the PKK carried out the executions using weapons, the terrorist group was unable to manipulate the situation by simply turning the tables back on Turkey and blaming the country; instead, it had to create doubt in people's minds. The HDP, the organization's legal wing, systematically spread rumors using politicians and their allied media channels, purporting that the 13 citizens may have died during the TSK's air bombardment of the area.

We want to believe that this confusion is the reason why our Western allies and the public are sticking their heads in the sand like ostriches in the wake of the Gara massacre. After all, there can be no possible explanation for the deafening silence that met the news of the massacre of 13 victims in the "cradle of civilization."

Now our "friends," whom we watch out for around NATO and the EU's southeastern border, lend credence to the statements of the PKK and the YPG. Now they doubt the statements of their ally, Turkey, the only democratic and secular state in its region capable of determining its government through elections.

I think the statements of the terrorists who were captured alive in the Gara operation in response to the massacre will likely eliminate any questions on people's minds.

Here is the statement by Doğan Geçgel, code-named Merkaz Botan, who joined the PKK in March 2014:

“We were with the detainees in the Şehit Brüsk cave in Siyane, Gara. We were eight. Because the tunnel was long and zigzagged, it was not visible outside. We waited there until 7 a.m. to get to the camellia (gazebo), and we got there. We saw the captives on the ground, dead, shot in their heads. I heard the soldiers’ call ‘surrender’ before I went outside, unable to withstand. I went out to give myself over to the soldiers. And the soldiers took me with them. I heard that the Gara field commander, Cuma Biliki, instructed the officer, code-named ‘Sorej,’ that 'if an operation or anything happens here, none of the prisoners should survive, nor should they surrender to their families.’ I mean, I heard him saying, ‘Kill them.’ Sorej told me. I heard it myself, and then I gave myself over to the soldiers.”

Here is part of the statement by Osman Acer, code-named Şervan Korkmaz, who joined the PKK in 2012: “If an operation begins, if anything happens, if the backup force fails to come, execute the hostages, kill them. He instructed to kill Turkish hostages, police officers, military officers and soldiers. This is what he said. And on Feb. 10, 2021, operation Roj Başa began. Then he turned and took a few people with him, and went to the captives who were under arrest ... and destroyed them all. The conflict continued, it lasted like this for a few days, and then Merkaz Botan, that is, Doğan Geçgel, surrendered, and then I surrendered.”

We are listening to you guys!

Now that even the PKK members have admitted their crimes, I think you should stop resisting the truth. I hope what actually happened in the Gara massacre is more clear to you now.

How embarrassing to be of that opinion in the face of this latest disgrace to humanity.