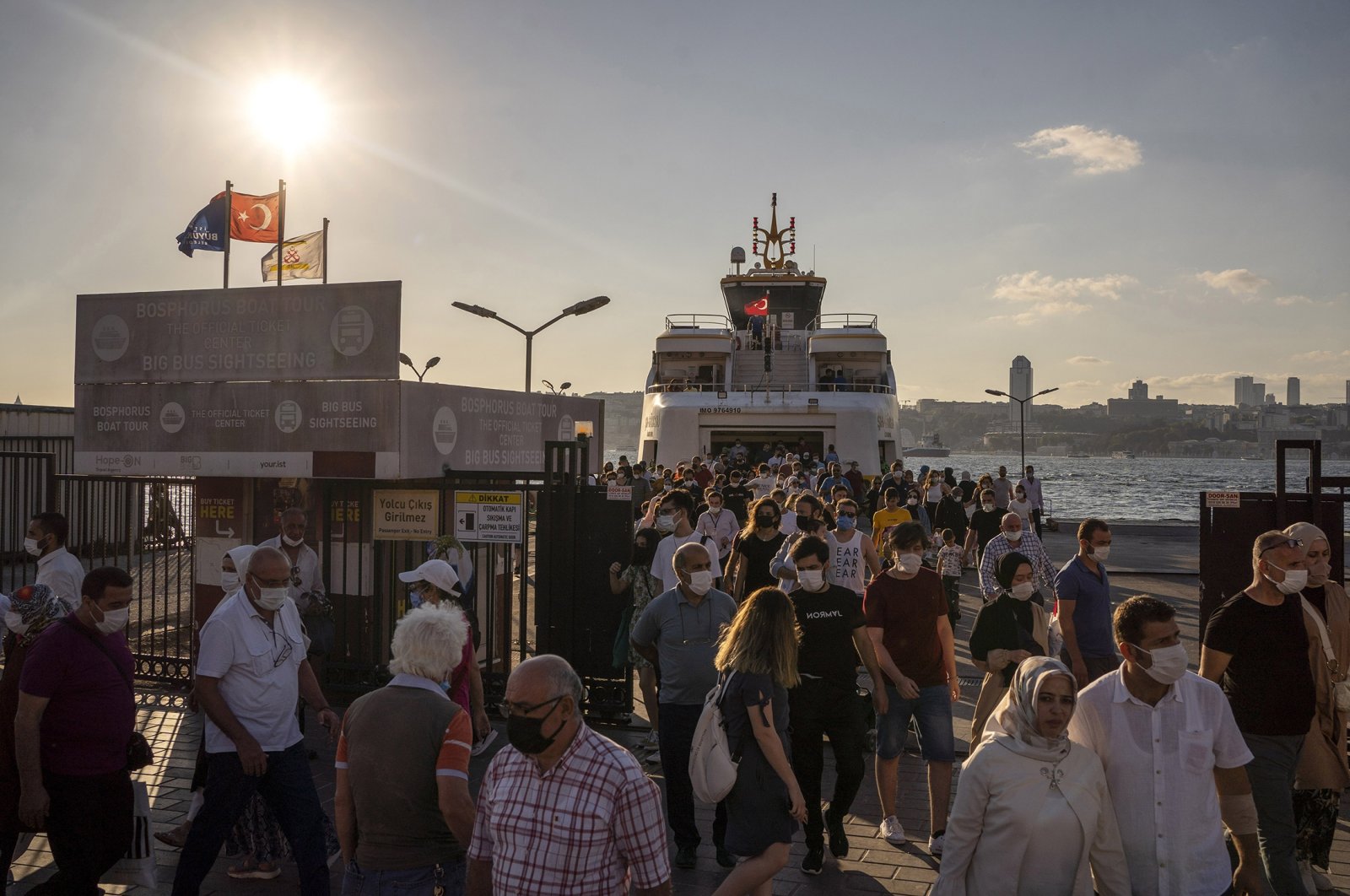 Passengers disembark from a tourist ferry at the docks on the Anatolian side, also known as the Asian side of Istanbul, Turkey, Aug. 16, 2021. (Getty Images Photo)
by Burhanettin Duran Sep 15, 2021 12:05 am

Not a day goes by without the Nation Alliance speculating or commenting on their prospective presidential candidate. Over the weekend, Meral Akşener, the Good Party’s (IP) chair, said there was “not the slightest problem” among the pro-opposition alliance’s ranks. At the same time, Ankara’s mayor, Mansur Yavaş, responded to speculation about his presidential run by saying he “wasn’t thinking” about entering the race, though he was proud to be considered a potential candidate.

The most recent controversy was born from Akşener’s public remarks, in which she likened Istanbul’s mayor, Ekrem Imamoğlu, to Mehmed the Conqueror as a sign of support. When Kemal Kılıçdaroğlu, the Republican People’s Party (CHP) chair, responded by saying that the Nation Alliance could field “multiple candidates,” Imamoğlu was forced to retreat – without shutting the door on his potential bid.

The main opposition leader may have successfully reined in his party’s mayors for now, but the opposition’s search for a suitable candidate will surely lead to many more confrontations. Indeed, it would be safe to assume that the talks will continue until the home stretch of the 2023 presidential race. After all, they are fully aware that picking a candidate too soon could expose them to scrutiny.

Moreover, disagreements over that name could destroy the electoral alliance, whose formation required the clearing of countless obstacles. As such, there is no need to expect the opposition to pick a sitting mayor or party leader as their presidential candidate two years before the election. Furthermore, we must acknowledge that the Peoples’ Democratic Party (HDP) would start a debate on ideological principles.

Under those circumstances, the obvious question is whether it is normal for the opposition to be talking about potential candidates so soon. My sense is that the current discussion is premature, and the electorate is getting tired of this never-ending debate.

Surely enough, Turkey’s opposition parties may want their prospective candidates to compete against each other since the People’s Alliance will nominate President Recep Tayyip Erdoğan in 2023.

Yet the ongoing debate has three repercussions. The first is that the opposition keeps early elections in the headlines.

Secondly, the focus on the candidates themselves leaves no room for principles, visions or ideology.

Finally, the focus on prospective candidates disempowers the HDP, which is facing a closure case. It enables the Nation Alliance to maintain some level of ambiguity regarding its relationship with that party. The HDP leadership, which faces no problem regarding candidates, is fully aware of its marginalized state. Hence the party’s intention to publish a so-called position paper to ignite a debate about principles.

For the record, the main opposition leader makes occasional references to principles. Yet his principles appear to be limited to anti-Erdoğanism, restoring the parliamentary system and, of course, the irrational idea of "self-control" – meaning that the popularly elected president should somehow govern the country while exercising their powers in accordance to an ambiguous parliamentary system.

What about Turkey's future?

Of course, Kılıçdaroğlu’s notion of “democracy” does not involve promoting a “common vision for Turkey’s future” with the participation of multiple parties. His vision of “the republic’s second century” boils down to settling scores with the Justice and Development Party (AK Party). In contrast, the debate around principles, which the HDP wants to start, intends to promote a far more radical “democracy” agenda.

That party, which treads on faultlines like identity and ideology, wants to confront the Republic of Turkey's first century in its entirety. It does not care about presidentialism or parliamentarian. It demands a new definition of citizenship and a new political regime. Indeed, that means making room for the radical demands of Kurdish nationalists in the political mainstream. Yet neither the CHP nor the Good Party wants to talk about the Kurdish question ahead of the 2023 elections.

Meanwhile, the HDP leadership understands the risks of taking the “opium of anti-Erdoğanism” and giving up on its current demands. It would create huge problems for them to ignore their ideological ambitions, in the eyes of their voters, just to stop Erdoğan from getting reelected. Indeed, it may prove impossible to prevent part of their base from voting for Erdoğan. In contrast, any attempt to start a debate on principles, which would criticize Turkey’s political system altogether, would unsettle the nationalist base of the Nation Alliance.

It is important to remember that Erdoğan’s position on the Kurdish question has not changed since his 2005 address in Diyarbakır. The president stresses that he has largely addressed the Kurdish community’s problems through “more democracy and welfare.” He remains in a position to take credit for his reforms while warning that the HDP actually hurts the Kurds. However, the CHP and the Good Party would have a hard time publicly joining forces with the HDP and offering concrete solutions to the Kurds' questions.

Ignore the ongoing war of words over potential candidates boring everyone to death. The debate over "principles" promises to open up the most interesting part of the 2023 campaign. We will come to see how the Nation Alliance, which Mrs. Akşener describes as "rational," really feels.