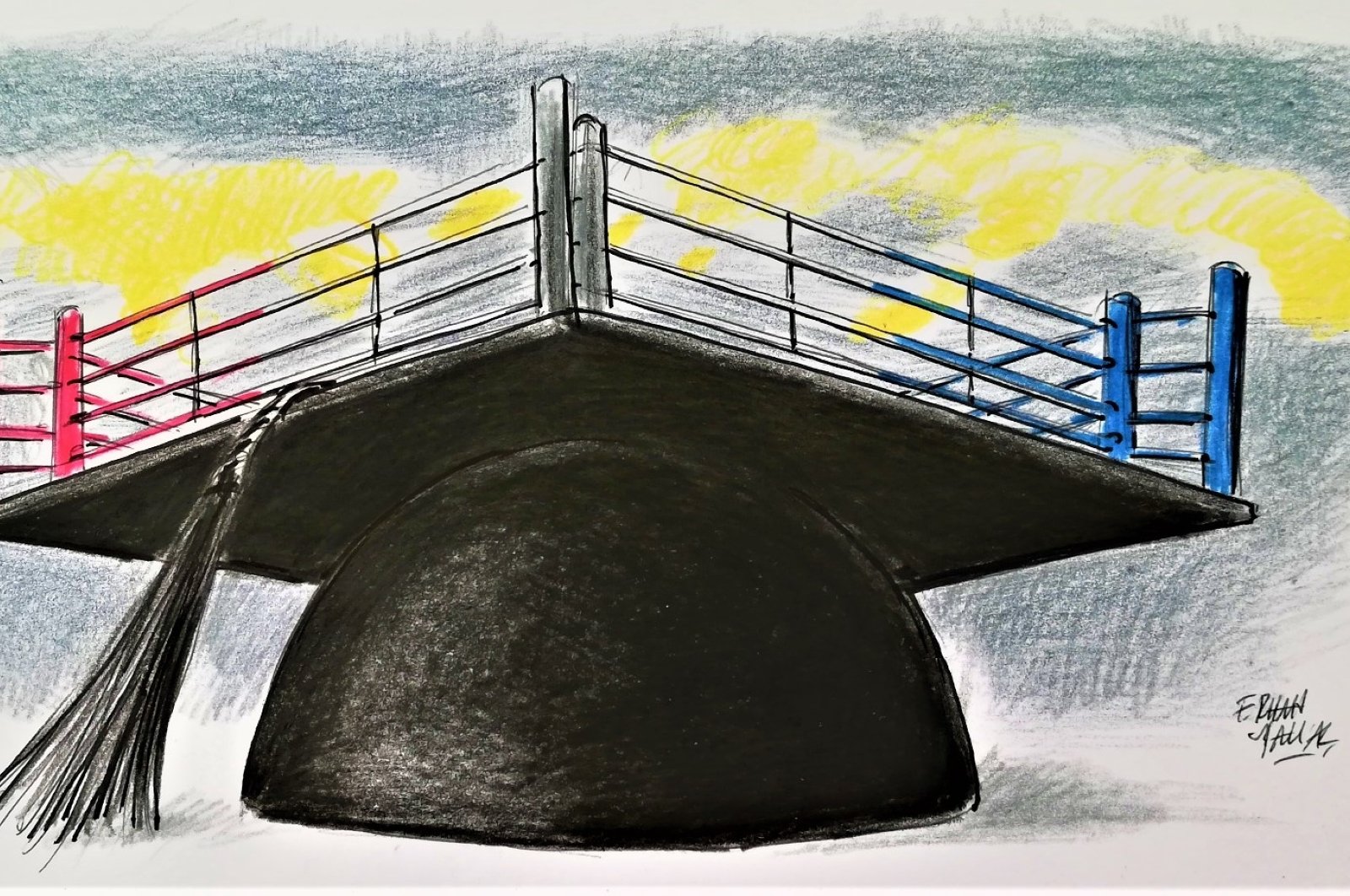 Illustration by Erhan Yalvaç
by Burhanettin Duran Feb 09, 2021 12:05 am
RECOMMENDED

Having received my bachelor’s degree from Boğaziçi University, I am warning you right away that the reaction to the appointment of a new rector may take a completely different turn. The debate has long gone beyond the selection of an academic from outside the university. The U.S. and the European Union expressed concern at the most recent developments, and Turkish officials responded to them, turning the initial disagreement into a multi-layered “issue.”

The first layer is about the management of Turkish universities. The appointment of a new rector to Boğaziçi University by Turkey’s president, who also appoints the rectors of other universities, is in line with the law. Some members of the Boğaziçi community, objecting to that appointment on the basis of “tradition,” exercised their democratic rights and protested the decision.

We have witnessed in the past how the election of rectors can make academics excessively politicized and sectarian. This new method to appoint rectors both highlights the administrative role of rectors at public universities and preserves the autonomy of higher education institutions vis-a-vis executive boards, senates, deans, departments and the research fields of academics.

To exchange views on the selection process for rectors in Turkey’s higher education system may have been possible with new proposals and critiques. Instead, we drifted to the second layer: a debate on Boğaziçi University itself.

The resistance of educators and protests by certain students, which made the appointed rector’s job virtually impossible, brought to the fore charges of elitism against Boğaziçi and opened its claims of academic excellence and authenticity to debate.

As radical groups swiftly hijacked the protests, the institution itself became the subject of public debate. Critics accused certain academics, with certain worldviews, of treating Boğaziçi University like a “rebel zone.”

Others talked about the alienation that excessive elitism entails and the "peer pressure" that individuals suffer behind the smokescreen of freedom. Boğaziçi University, some said, was no different than the other public universities that run on taxpayer money.

A third layer emerged out of a disrespectful act toward the Kaaba, Islam’s most important site, during the protests, and the profiling of students who reacted against such acts. It also included the support of certain political parties through their provincial offices, an attempt by the protesters to invade the rector’s office and the involvement of certain individuals with links to terrorist groups.

At this point, we are talking about Boğaziçi University, but, more broadly, the conversation is about acts of provocation, the behavior of law enforcement officers and the potential revival of the Gezi riots.

The fourth and final layer is the perception of Turkey in the international arena and the question of democracy, in light of mounting criticism.

Let me start by saying that I doubt that the Boğaziçi protest will lead to another Gezi riot. The Turkish government has dealt with many protests and heavy turbulence since 2013. At the same time, opposition leaders know that using students as cannon fodder to incite riots on the streets would inevitably entail radicalization, which would hurt them too.

Moreover, it is no secret that recent protests in France, Germany and the U.S. have been quickly hijacked by radical groups. The memories of the police crackdown on "yellow vest" protesters in Paris and the U.S. Capitol Building invasion in Washington, which was described as a coup attempt, an insurrection and an act of terrorism, are still fresh.

In other words, no country is a stranger to the phenomenon of protesters being radicalized, by domestic or foreign parties, and their exploitation to sell the world certain ideas.

As such, the stern warning against “testing the power of the state” was clearly for those parties seeking to exploit the current situation, as opposed to the students themselves.

In this regard, the words spoken by the leaders during these protests are very different from those used after the coup d'etat of Sept. 12, 1980, or Feb. 28, 1997. “The power of the state,” in other words, is being demonstrated to provocateurs rather than students.

At what point do protests become a security problem? This subject is being heavily debated in democracies around the world. Those individuals, seeking to transform the Boğaziçi protests into another Gezi insurrection, would only place universities and students in harm’s way.

As a matter of fact, Boğaziçi University’s faculty and students must be the first to reject radicalization, which threatens to undermine higher education altogether. Western governments, which attempt to lecture Turkey on the virtues of democracy, now, in turn, should go back several months and remember their own recent past.