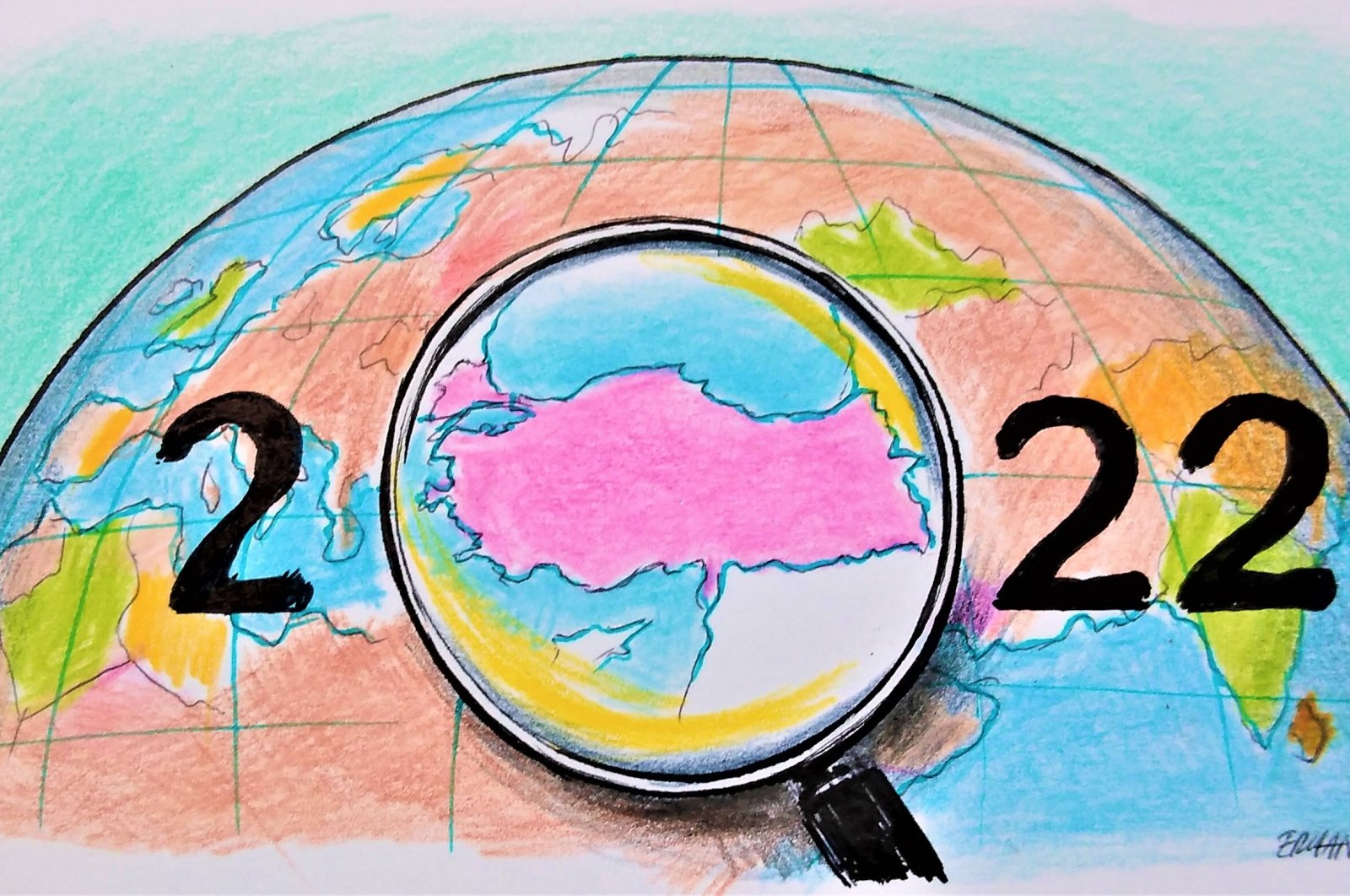 Illustration by Erhan Yalvaç.
by Burhanettin Duran Jan 03, 2022 12:05 am
RECOMMENDED

Wishing everyone a happy and peaceful new year, so let me share some of my predictions about Turkey’s political agenda in 2022.

The opposition will not stop demanding an early election in 2022, while the current government will want to wait until the country's new economic model starts yielding results. As such, President Recep Tayyip Erdoğan’s administration will strive to address everyday economic problems for minimum wage workers, pensioners and civil servants by giving them raises and will allocate additional resources to the agricultural sector. The country will count on revenue from tourism, as the pandemic is expected to slow down from April, and it will attempt to curb inflation, boost exports and create jobs. The alleviation of these common problems is expected to prompt the ruling Justice and Development Party (AK Party) to actively communicate its accomplishments to the country to reach out to the electorate. Again, the government will use important developments such as the deployment of Turkovac against the coronavirus, the electric car Togg, the activation of the first unit of the Akkuyu nuclear plant and the delivery of recently discovered natural gas from the Black Sea to customers, along with other projects, to promote a positive agenda.

There will be many discussions this year over presidential candidates, Turkey’s new constitution, the "augmented" parliamentary system and transition proposals. Politicians will use mild rhetoric to win over certain voters, as we witness an uptick in strongly-worded statements and accusations. The main opposition Republican People’s Party’s (CHP) pledge to “make amends” and description of Qur’an courses as the reflection of “a medieval mindset” immediately come to mind. In this sense, Turkey watchers should expect CHP Chairperson Kemal Kılıçdaroğlu to diversify his attempts to be proactive, such as showing up at the Turkish Statistical Institute (Turkstat) and the Ministry of National Education.

At the same time, the competition over key parts of the electorate will intensify over the next months. Kurds, young voters and religious conservatives are among the high-value targets. Fringe parties like the Felicity Party (SP), the Future Party (GP) and the Democracy and Progress Party (DEVA) will face an ever-deepening contradiction. They will face criticism for being dominated by the CHP as they are admitted into the pro-opposition Nation Alliance. The CHP leadership may exploit their opposition to Erdoğan in an attempt to reassure religious conservative voters; however, their marginal role in the opposition’s future plans, coupled with sudden manifestations of "secular anger," will certainly cancel out those attempts.

Another important point relates to the rapprochement between the CHP and the Peoples’ Democratic Party (HDP), which faces closure over its links to the PKK terrorist organization. The main opposition’s resistance to military operations in Iraq and Syria was a crucial step in that direction. Going forward, the strengthening cooperation between those movements will attract more attention, in many ways, as the recent debate over the hiring of PKK-affiliated persons by the Istanbul Metropolitan Municipality (IBB) suggests. As the Constitutional Court decides the HDP’s fate, the opposition’s involvement with that party will continue to fuel speculation.

In the area of foreign policy, normalization with Armenia, Israel, Egypt and Saudi Arabia could gain momentum in 2022. While the opposition could criticize those steps, that normalization agenda ultimately stands to serve the government’s interests. Moreover, escalating tensions in the Black Sea and Ukraine require Turkey to play an active role in diplomacy. Under Erdoğan’s leadership, Turkish diplomats could resolve the crisis in a way that promotes a balance with the United States and Russia simultaneously.

In the meantime, the success of Turkey’s armed drones, which have been a game changer in conflict zones like Syria, Libya, Karabakh and Ethiopia, will continue to make headlines internationally.

For Turkey, the main sources of tension will include Greece’s maximalist demands and drilling around Cyprus and in the Eastern Mediterranean. Needless to say, the European Union’s unjust take on those potential disputes threatens to make a negative impact on Turkey’s relations with the West.

Altogether, the government has the capacity and a strong leader to tap into all kinds of options to expand its political and rhetorical domain.