Will Macron send frigates and jets to the East Mediterranean again? 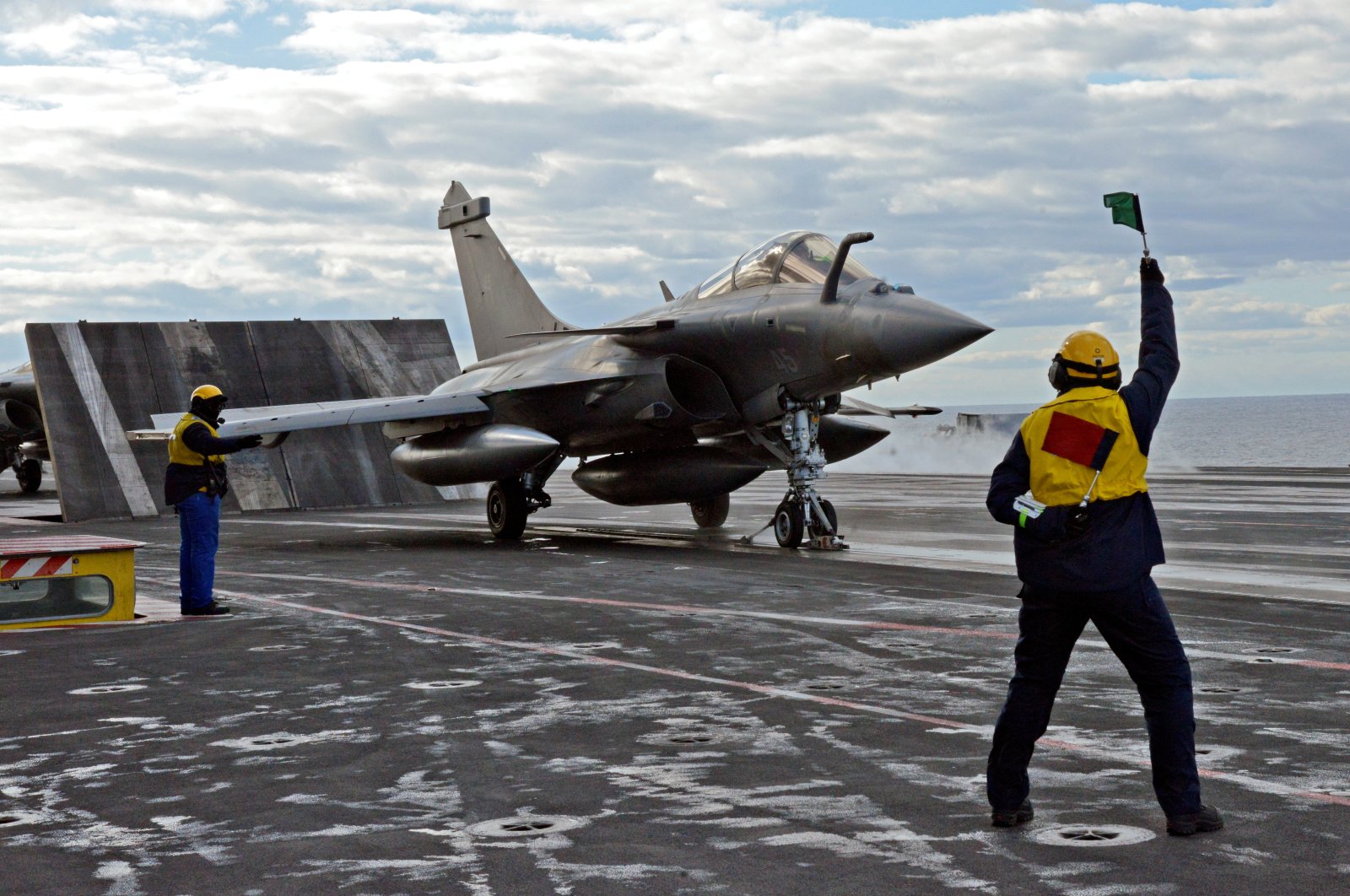 A French Rafale fighter jet is catapulted from the French aircraft carrier Charles de Gaulle, off the eastern coast of Cyprus in the Mediterranean Sea, Feb. 10, 2020. (AFP Photo)
by Merve Şebnem Oruç Sep 25, 2020 12:05 am
RECOMMENDED

President Recep Tayyip Erdoğan and French President Emmanuel Macron held a phone call this week after months of frosty bilateral relations. The call, which lasted an hour, was the first conversation between the two leaders following a standoff between the two NATO allies. Fueling the recent tension between Turkey and Greece in the Eastern Mediterranean, it seemed like the French president was out to launch a crusade against Turkey. Instead of acting rationally and seeking a way to reduce the conflict, he chose to pick up a stick in an attempt to give Turkey a beating. Macron’s desire to break Turkey came after the failure of France-backed putschist Gen. Khalifa Haftar in Libya against the Turkey-supported and U.N.-recognized Government of National Accord (GNA).

Not only attacking Turkey with words, Macron also sent warships and jets to the Eastern Mediterranean, where France has no shores, to support Athens, escalating the naval activity in the region to a more dangerous level. Ignoring the calls of Ankara for a dialogue, he tried to get support from NATO and the European Union and wanted them to share his aggressive stance against Turkey.

Most recently, ahead of the EuroMed7 summit in Corsica – a Mediterranean island and one of the 18 regions of France – where the leaders of seven Mediterranean countries of Europe met two weeks ago, Macron said that Turkey was no longer a partner in the Mediterranean region. Aiming to isolate Turkey and encourage the seven state leaders to stand with him, he tried to explain himself stating that his problem was with Erdoğan not with the people of Turkey.

Macron was disguising his actions as a policy targeting only the Turkish president, but he totally misread Turkish society and missed the fact that Turkish people, whether they support Erdoğan or not, are united against Greece’s maximalist dreams disregarding Turkey’s interests in the Eastern Mediterranean.

The French leader has been busy setting "red lines" with Turkey for a while, however, he had to backtrack his threatening tone and contacted Erdoğan this week. Hailing the exploratory talks that will reportedly begin soon between Turkey and Greece, according to a statement issued by Elysee Palace, Macron said on the phone that France was always ready for dialogue and attached importance to a solid relationship between the EU and Turkey. Meanwhile, Erdoğan told Macron that Turkey expects France to display a “responsible and constructive” approach and that channels for consultation and communication between the two countries should “continuously remain operational,” according to the statement from Ankara.

It looks like the French president finally understood that his arrogant behavior and threatening words do not work on Ankara. He struggled a lot to build an international consensus against Turkey. With Greece and the Greek Cypriot administration, he worked hard to bring the European leaders together to terrorize the Turkish people with a joint military alliance that would fully back Athens and Nicosia. However, now its time for him to stop dreaming. He couldn’t hurt Ankara with his words and actions, he couldn’t make an anti-Turkey coalition and he couldn’t “teach Turkey a lesson."

Everybody knows that Macron magnifies himself and wants to act like Europe’s foreign policy leader by default as British Prime Minister Boris Johnson is busy with the Brexit endgame problem, German Chancellor Angela Merkel has chosen to keep a low profile due to a paralyzed grand coalition in Germany and the U.S. has lost its authority over the West. He sees the vacuum as an opportunity to lead Europe; however, his reckless statements, half-baked actions and adventurous ambitions irritate fellow Europeans. Even though there were also six other European leaders in Corsica, Macron was the only one that felt the need to pump Greece and Greek Cypriots against Turkey. No one wanted to have a military presence in the Eastern Mediterranean and show their teeth to Ankara.

The New York Times wrote last year that Merkel said to Macron during a dinner marking the end of the Berlin Wall: “I understand your desire for disruptive politics, but I'm tired of picking up the pieces. Over and over, I have to glue together the cups you have broken so that we can then sit down and have a cup of tea together.” The French president had the opportunity to call for a dialogue between Turkey and Greece. He could have brought the two NATO allies to the table and ease the tension just like Merkel did, but he chose to do the opposite.

Although Turkey and Greece faced off again after Merkel's first intervention, she did not give up. Erdoğan was open to talks with her as the German chancellor continued to work on easing tensions and her efforts were respected by Ankara, and not just because Berlin currently holds the EU’s rotating presidency. Macron could have done the same. This week’s phone call could have been held weeks ago. He could have made a difference and shown that he was willing to do something other than making flashy statements and hosting fancy meetings at the Elysee Palace. If he acted wisely, no one would have said that he should leave the talking to the grown-ups.

A conversation between Erdoğan and Macron is good for everyone. It is a sign that Macron can be constructive and open to dialogue, too. But he has to stop talking excessively if he does not want to appear like an adventurous but unskilled leader. Throwing ideas into the pot and acting without thinking does not make one a captain. Yet still, let’s not be hasty and see if he will send French frigates and jets to Greece. I hope he doesn't. After all, he is still a gainer. He managed to sell 18 Rafale jet fighters and four multirole frigates to Greece, a country with an increasingly volatile economy.